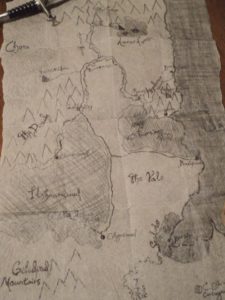 Dimi and his forces of the Dark Tide have found themselves in a bit of trouble as a result of their latest “score.” The High Lady of Goldenstep set a bounty on the heads of the Dark Tide, as well as a reward for the return of her property, putting Dimi and his newest team on the run. Watch our four misfit adventurers as they work their way into being the most elite team of a highly feared and deady guild of assassin’s and spies… The Dark Tide.

The Northland is a vast and wild land in the rigid cold of the North.  The temperatures sit below freezing for nearly half of the year, making the land barren and void of foliage, except for the forests which take root at the foot of the mountain ranges.  Since farming yields little results, nomadic tribes outnumber the few towns scattered across the land.  The only cities in the land, aside from Goldenstep, are mainly based on trade because of the land’s abundance of natural mineral deposits making it a prospect for blacksmiths and miners.  The harsh living conditions and extreme weather make it hard for the residents of the Northalnd to make an honest living.

Goldenstep, also known as the Shining City of the North, is the only remnant from the Civilization of Old.  The grand temple spires and mage towers populate its skyline.  Sitting at the head of the city is the High Lady, governer over the city and surrounding lands.  Under the influence of the High Lady, the Shining City has returned to it’s former glory.  She supplied a safe environment supported by law and free of bandits and pirates who seek to take advantage of the weak.  Though, this “perfect” system she created would have not been made possible without the balance of the Dark Tide.  Dimi Nished is well aware of his own part in the restoration of this great city and seeks to maintain the balance which has been known for nearly one hundred years.   The High Lady denies Dimi’s place in all of this and with her obsession  for the ideal community, she continually seeks for ways to take Dimi and the Dark Tide out of the picture.

The Civilization of Old once spread from the Cage far to the North down to Bucsden and the Vale in the South.  Nearly one thousand years have passed since the days of the Civilization of Old and it’s grand expanse of beauty and education.  Its ruins of keeps and cities are scattered among the Northland.  Only adventure seekers and treasure hunters go to these places of ruin, since they are known to house evil demons and liches who seek to claim the extremely powerful artifacts of the Old Civilization for themselves to satisfy their hunger for power and conquest.