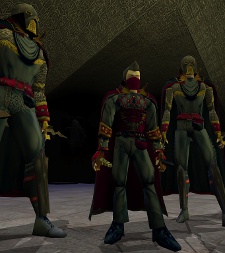 Dimi was raised in the tropical city of Ishden far south of the Northland.  He was identified at a very young age as a gifted child in the art and magic of music.  Dimi’s parents, being very wealthy citizens of Ishden, had the gold to send Dimi to anywhere to get the best schooling to develop his music skills.  At the age of six, Dimi was sent to study at the Goldenstep Conservatory of Music, the most prestigious  music school in the known world.

Unlike the rest of the children he studied with, he was the only one who had no attachment to home and wasn’t stricken with home-sickness for the better part of his first year.  As he progressed through his schooling, he quickly discovered his ability of charm and seduction.  The biggest problem he faced was his size, which still never gave him much trouble at all.  As he studied his music at the conservatory, he searched for situations that he could take advantage of and perhaps control.  By the time he was ready to leave the school and go perform for himself as a bard, he already had built his connections and favors within the school.  Several of the conservatory’s top bards, including the head of the conservatory himself, were in debt to Dimi in one way or another.

The years following his studies at the conservatory were very productive.  He would perform nightly at the most prestigious taverns in Goldenstep and was eventually dubbed the title of “The Singer” because he could minipulate his voice so well in song and in conversation.  After every performance, he would come away with more gold than promised.  He would always smile when leaving a tavern knowing the amount of gold he recieved, and knowing he could have gotten more if he’d wanted.

Dimi caught the sight of the Royal Court of Goldenstep.  After one of his performances at the Palace Tavern–a tavern across the way from the High Palace–he was approached by an official of the court.  He was offered a job as the Court Bard at the High Lady’s Palace.  Dimi had reservations about the job since he wasn’t too fond of working under structure and the rule of authority.  He was his own person and that’s how he wanted to keep it, but when the official of the court made his offer, Dimi could resist the price.

For the next couple years, Dimi lived like a king, and all for a nightly performance for the High Lady.  In this time, Dimi had opened a vault in another name at the local Goldenstep bank.  Over the course of the two years under the pay of the High Lady, he had built up a large store of gold and jewels, both given to him and stolen by him.

Dimi was getting fed up with the stupid rule of the High Lady.  After living under the same roof as her for two years, he couldn’t take it any longer.  One summer night, he grabbed all the gold he could, wether it be his or not, and left the Palace for good.  He set up a small tavern in the Western District of Goldenstep and he named it The White Feather.

Unfortunately, this was not the end of Dimi’s dealings with the High Palace and the Court.  He was constantly bombarded with inspections of the White Feather to make sure no illegal operations were going on there as well as frequent bans on his products sold at the tavern.  One day, after a visit from the requisition officer placing ban on his most popular selling Elven Wine, he was fed up with it all and decided to take action.  He hired a few of the local rogues in the district to scout out and bribe/scare the officer into looking over the operations of the White Feather.  Eventually, this evolved into a permanently hired staff of rogues under the roof of the White Feather.  They would carry out simple information retrieval missions and bribery operations so he could keep his Tavern making the most money it could.

Based upon years of development and evolution, the Dark Tide turned into the most feared group of hired assassins and spies in the Northland, if not the entire land.  If anything “questionable” needed to done by anyone who is anybody, they would pay the steep price to get the Dark Tide as their weapon.  The Dark Tide is known to do anything that is needed, no matter what needs to be accomplished, it will be done if the pay is right.