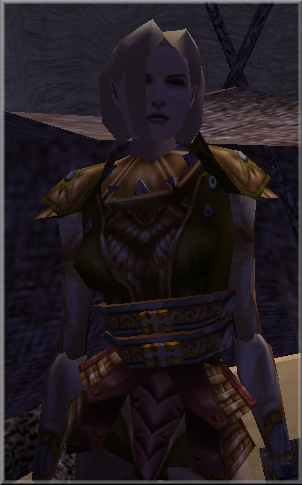 Race: Human
Occupation: Salt Vendor
Place of Birth: Elkayjun
Known Relatives: Mother (Unknown Name), Father (Unknown Name), Hannah (Daughter), Katie (Daughter), Craig the Commander (Husband)
First Appearance: Neverending Nights – Episode 5: Ye Salty Dog
History: Having grown up in the run down city of Elkayjun all of her life, when Poppy had her two daughters Hannah and Katie, she wanted to have a better life for them. While she lived in Elkayjun, she could never afford much – so she always used salt to enhance the same meals that they ate, day in and day out. She began experimenting with salt, and trying to create various ways to make it taste different on their food – when one day, she stumbled upon the creation of Pepper Flavored Salt. She had originally thought nothing of it, as she had made other forms of salt as well (lemonade flavored salt, fresh iced tea flavored salt, etc). But her eldest daughter, Hannah was hopeful that this Pepper Flavored Salt could make them money. Poppy left for the City of Neverending, where she vended her Pepper Flavored Salt, and discovered, it was quite a huge success.

Poppy finally had earned enough money to move her daughters out of Elkayjun and into the much nicer Blackmire City. Poppy established a Salt Route, where she would sell her Salt – traveling from the City of Neverending to Galana; from there to City of Ator then Logue Bario; then to Port Ynhi and then to Port Freese, and finally Helen Township. She sent whatever surplus of money she could to Hannah to take care of herself and her younger sister, Katie. For years, Poppy traveled this route, visiting her daughters every time, along the route.

However, during one of her routes, the path that she had been on, when leaving the City of Ator and heading for Logue Bario, had vanished as a mysterious sand storm blew away, as if it had never existed. Only moments before the mysterious sand storm, back at Blackmire City, Hannah had met Peter and Grayson who had just fetched coins from the Wishing Well in the City. (Note: This event appears to be tied to the fact that Peter and Grayson took the coin that Hannah the Hopeful had used to wish for her mother’s safe return; due to the legend of removing coins from a wishing well destroys the wishes that were made with those coins).

Peter was concerned that Hannah had been right and asked Grayson who blew it off as common superstition. Still, Peter watched as Hannah left the well and returned home, clearly looking sad.

As Grayson returned to the Bar with the gold they recovered from the Well, Peter told Grayson he’d be there in a moment. Instead Peter went to Hannah’s home to speak to her and ask her why she had looked so sad at the Well. Hannah explained that her mother was a Salt Vendor and had been traveling for quite some time. Peter immediately asked if her mother was none other than Poppy the Salt Vendor, whom he had encountered in both Galana and the City of Ator. Hannah was pleased to know that her mother had been fine. Peter reached into his pouch and gave Hannah 300 gold (which he had no idea where he got that from; unaware that once again, he was drawing money from Alan (“The Astounding!”)’s magical pouch). He told Hannah to give that gold to her mother as payment for more Pepper Flavored Salt (in truth, hoping that all that gold would set them for a long time, so that she would not have to be away from her daughter).

Commander Craig found Poppy in the Stormpeak Mountains – the supposed home of the Blue Dragon, Cobalt. They safely retrieved her and returned with her to the City of Ator. When it came to collecting the reward from Hannah, Commander Craig refused the award and said that he had done it because someone needed help – not because he had wanted the reward. Poppy the Salt Vendor refused to let Commander Craig leave without accepting something – so, the two of them went on a date where they discovered they had several things in common and bonded very closely.

Before long, Commander Craig became a steady member of their family – finally, officially proposing to – and marrying Poppy the Salt Vendor, and adopting Hannah and Katie as children of his own.

Poppy opened her own store, and no longer travels the world selling her salts. She is the main provider of salt in the City of Neverending, and has a large vending booth in the Bar of Destiny.

Accessories:
SALT: Poppy is armed with an assortment of salt that she knows how to use like a weapon.