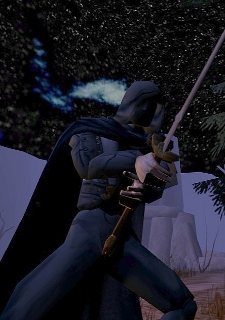 Snafe has lived as a local of Goldenstep for his entire life.  His childhood was spent in the shadow of a great Paladin.  His father was the most renowned Paladin of his order.  In his order, he ws the most loyal and dutiful of the paladins and he answered directly to the high priest of his god.

Snafe was taught to use the Greatsword, the chosen weapon of his father’s order, from a very young age.  What began as basic sparring matches with his father eventually turned into intense struggles often bearing no winner.  By age fifteen, Snafe had surpassed his father’s ability and was admitted into the order as an acolyte to his father, the youngest man ever admitted.  This was a proud moment for both him and his father, but Snafe always felt that it wasn’t his place.

Mischief continued to guide his life as he grew in the order and he was always getting trouble with the order, though he got away with more than what he got caught for.  He was trained in the ways of worship and meditation, though he was not favored by his god.  While the other acolytes increased their ability to harness the divine magics increasing their ability to fight, Snafe was having to find other ways to keep up with the progress of his peers.

Snafe’s attempt to keep up with the other acolyte’s combat progress took him away from the traditional route of using heavy armor as a shield for incoming attacks, instead he began to work on his agility.  Within a year, he was back on track with his peers without the help from the divinely assisted magics.  His tactics had him light on his feet and evenly balanced, where the general fighting style of the order was with heavily planted feet and divine strength in relentless swings of the blade.

The time had come for his class of acolytes to advance into the order as Paladins.  They all had been called to the temple where the entire order had gathered to see the glorious spectacle.  Snafe had done well to hide his lack of divine magics, but this was one point he could not pass without them.  He and his fellow acolytes were lined before the priests of the order in the center of the temple before a grand statue of their god.  The five young men were clothed in robes that would be removed as the holy armor would be placed upon them.  The priest went down the line, helping the squires put on the holy armor for the first time.  This was the ritual of the order.  The armor would either accept or deny it’s wearer.  Once all young men were equipped in the holy armor, the priest turned to the statue of their god and began chanting.  A bright light filled the room, focusing around the line of acolytes.  Snafe felt the armor slowly slip from his body as he was not accepted by the god of the order.  As the light faded in the room, all acolytes were in their armor except for Snafe who was standing in nothing but the cloth under-armor.  He was rejected.

Snafe looked down at his armor-less body and wasn’t surprised.  He was sad about what happened, but he had expected it to turn out this way.  Snafe looked up to see the spot where his father stood was empty.  He was more sad that he was a disappointment to his father than being rejected by his god.  In fact, he wasn’t looking forward to be a Paladin anyways.

When Snafe returned home, he found his father and mother sitting in silence at the dinner table.  Snafe took his usual spot and dished up his food.  He did not look up from his plate for the entire meal.  Finally, after he had finished eating his father spoke.

“Son, I am not ashamed of you, only myself,”  His father spoke in a soft, comforting voice, “I should have known, but I was blinded by my own desires.”

Snafe sat in silence for a time before speaking.

“It’s ok, I learned a lot that I will take with me.  I learned discipline, duty and combat prowess from studying under you at the order.  That is more than I could have ever asked for,” Snafe said with a smile.  He was always charming (He definitely had the charisma to be a Paladin).

“Have you thought about what you are going to do now?” His father asked.

“My desires are questionable, and I do not wish do disappoint.  I will utilize all you have taught me.  Thank you, father.”  Snafe stood and cleaned his spot at the table, hugged his mother goodnight, grabbed his gear and headed to his room.  His father understood and was not disappointed at all.  In a strange way, his father was very proud of his son.  He understood what Snafe was going to do and he hoped that they did not cross paths.  If they were to meet in the future, it would conflict with his Paladin ways and he wouldn’t know how to handle himself in the service of his order and his god.  Snafe returned to his room where he spent his last night under that roof.  In the morning, he would be gone before his father was awake.  He vowed to himself to keep in touch and that he would see his parents again.

The next morning, Snafe walked proudly down the street.  He was no longer dressed in the squire robes that he was so accustomed to wearing on a daily basis.  Instead, he wore dark leather armor with a black hood and cloak.  As he strode down the cobblestone street, he was approached by two men wearing dark armor with red and gold accents.  He stopped and reached for his sword which was strapped to his back.  He didn’t think he would be in trouble this soon after leaving.  It was amazing how they all emerged from nowhere.  Before he knew it, they had offered Snafe a job and he was on his way to the other side of Goldenstep.  Word had spread about Snafe’s abilities, and Dimi wanted him before anyone else got a hold of him.

Snafe worked with the Dark Tide for the next couple years.  He wasn’t actually a member, but Dimi had him as a trainee within the Dark Tide and intended for him to be trained.  Nobody liked Snafe, mainly due to his choice of weaponry in the den of assassins and spies.  A greatsword was not a weapon of stealth.  If Dimi hadn’t insisted on Snafe’s participation in the Dark Tide, he would have been driven away or killed within a week.  Nobody would take Snafe in, so all he could do was mimic what he saw.  Within two years of copying what he saw and combining what was effective for himself, he was far more stealthy than any other member of the Dark Tide.

Snafe was still ridiculed for his combat style, but nobody wanted to cross him because of his amazing combat prowess.  He was alone within the Guild.

…Until Dimi called him and three other’s into his office.