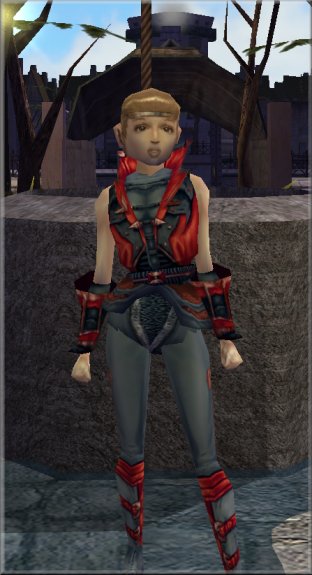 Race: Human
Occupation: Daughter of Salt Vendor
Place of Birth: Elkayjun
Known Relatives: Poppy the Salt Vendor (Mother), Father (???), Katie the Kid (Sister), Craig the Commander (Adopted Father)
First Appearance: Neverending Nights – Episode Thirty One: Side Effects May Vary
History: Born in the run down city of Elkayjun, Hannah’s mother, Poppy the Salt Vendor, promised she would make a better life for her daughters. Hannah was often left to take care of her younger sister, Katie the Kid. Hannah was a young, capable woman who knew how to take care of herself – but she always longed for her mother’s safe return from her various Salt Route Trips around the country side. Hannah’s frequent visits to the wishing well in the city of Elkayjun is how she earned the title of ‘Hannah the Hopeful.’ When her mother discovered Pepper Flavored Salt, which became an instant success she returned to Elkayjun and moved Hannah and Katie to the much cleaner city of Blackmire. Despite Poppy’s success with Pepper Flavored Salt, she continued to travel. Hannah found a well in the city of Blackmire, where she continued her tradition of tossing a coin into the well and wishing for her mother’s safe return.

It was on her way to the Wishing Well that she first ran into Peter and Grayson, who had been “acquiring” money from the well for their own needs. She had explained to them that money taken from the Well undoes the wishes that were asked for – and can often have disastrous results as the wishes become undone. Peter was concerned that Hannah had been right and asked Grayson who blew it off as common superstition. Still, Peter watched as Hannah left the well and returned home, clearly looking sad.

As Grayson returned to the Bar with the gold they recovered from the Well, Peter told Grayson he’d be there in a moment. Instead Peter went to Hannah’s home to speak to her and ask her why she had looked so sad at the Well. Hannah explained that her mother was a Salt Vendor and had been traveling for quite some time. Peter immediately asked if her mother was none other than Poppy the Salt Vendor, whom he had encountered in both Galana and the City of Ator. Hannah was pleased to know that her mother had been fine. Peter reached into his pouch and gave Hannah 300 gold (which he had no idea where he got that from; unaware that once again, he was drawing money from Alan (“The Astounding!”)’s magical pouch). He told Hannah to give that gold to her mother as payment for more Pepper Flavored Salt (in truth, hoping that all that gold would set them for a long time, so that she would not have to be away from her daughter).

Unbeknownst to Peter and Grayson, because they had taken money out of the Wishing Well, it had indeed hampered Poppy’s travels. A mysterious sand storm suddenly appeared and erased all evidence of the path that she had been on. Lost, she ended up encountering all the animals that Peter had previously summoned in the desert outside of the City of Ator.

Commander Craig found Poppy in the Stormpeak Mountains – the supposed home of the Blue Dragon, Cobalt. They safely retrieved her and returned with her to the City of Ator. When it came to collecting the reward from Hannah, Commander Craig refused the award and said that he had done it because someone needed help – not because he had wanted the reward. Poppy the Salt Vendor refused to let Commander Craig leave without accepting something – so, the two of them went on a date where they discovered they had several things in common and bonded very closely.

Before long, Commander Craig became a steady member of their family – finally, officially proposing to – and marrying Poppy the Salt Vendor, and adopting Hannah and Katie as children of his own.

Accessories:
NONE: Hannah uses no weapons.