NOTE: These were originally created a long time ago (dating back to 2004). As such, I have been going through and re-filming them all in 1080p HD and re-releasing them every Saturday. If you’re looking for the 1080p HD versions – please check this page for 1080p HD episodes for Season One. If for whatever oddball reason, you want to download a physical copy of the Original versions, simply email me (obviously remove the “-NOSPAM-“ part out of the email address) and I can make the specific episode(s) you want temporarily available.

You can watch the entire Season One here: 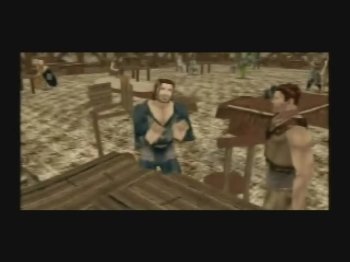 Writer’s Note: This is a tough episode to watch – even for me. This was our first venture into Machinima. To say there was a lot of experimenting happen would be a serious understatement. The first episode was one huge experiment to see if we could even get this to work how we wanted. It’s very flat. And thankfully everything about the series, from the video quality, the animation, sound quality, voice acting and writing all drastically improve as the series continued to progress. 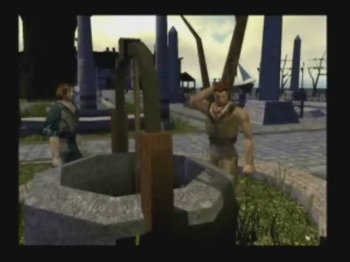 Writer’s Note: Still in the learning process of Machinima and filming within a game environment you can see in this video we switched our filming style from the original episode. Originally we had thought of going widescreen to give it a cinema look – but decided the full screen was much cleaner. This is where the would-be heroes first really get an idea with what they should do for a quest… 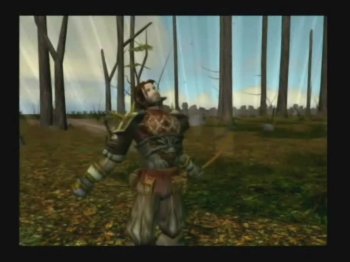 Writer’s Note: This episode may seem like it’s a filler episode, but it really does begin to define what these would-be heroes, Peter and Grayson are really like. Everything from purchasing questionable maps from close friends, to thinking that they could easily handle taking down a dragon – the most epic thing any hero can do! For Peter and Grayson they think it’s an easy short cut to fame and fortune – and being able to open up their own bar! 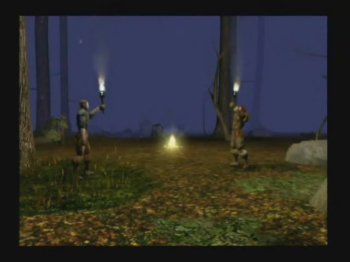 Writer’s Note: Another character defining moment – especially for Peter the Ranger. In this episode, with the entire fiasco with the campfire – you learn that Peter the Ranger isn’t exactly the best of the rangers. The reference to the “one eyed elf” drawing is a personal jab at myself. There’s one thing I can draw. An elf. With one eye. And I put – as we had Grayson say “a wisp of hair” – over the eye because I can never draw parallel eyes without making the elf look like some kind of swamp creature. 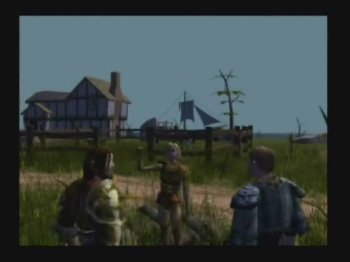 Writer’s Note: This is the first episode we introduced one of our friends and gave them a line. Poppy the Salt Vendor. Like most of the friends we introduce, each character has a quirk – usually based off the person playing them. Poppy has an infatuation for salt. I kid you not. She puts salt on top of her salt. So naturally when we introduced her we wanted to make reference to her obsession with Salt. The whole Salt Vendor joke actually did quite well in the series, which led her to having multiple appearances in later episodes. 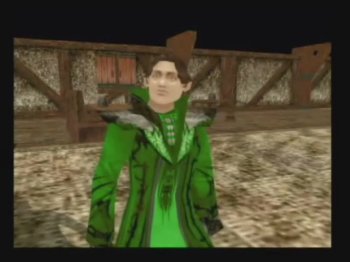 Writer’s Note: Another episode where we have a friend of ours lend a voice. Alan the Astounding is voiced by Chad Yantos. The whole joke with Alan being a drunk wizard is, once again, a reference to a real event. During a (booze) cruise one year on a ship – Alan and Tawmis got into a drinking competition and drank… a lot. Well, while leaving Chad was walking – and suddenly fell forward – no hands out or anything – he just passed out in mid-stride. It was pretty incredible. We had to drag him (he was like dead weight) back to his room. 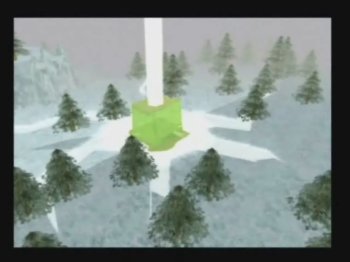 Writer’s Note: This episode was pretty fun. We wanted to make use of the salt the character purchased, and so we used an gelatinous cube to be a “ice cube monster.” Using the salt from Poppy the Salt Vendor to … Well you will see. But the multiple shots of that result is our little jab at Anime and how they show the same explosion from like fifteen different shots. 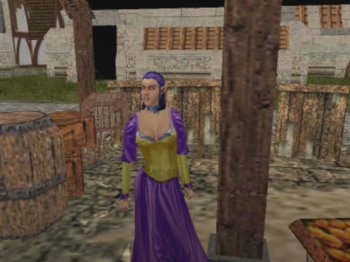 Writer’s Note: This one introduces Tawmis’ wife, Amiee. This is the first time we actually worked close with the person lending a voice. Amiee, who is what we call “A Professional Shopper” – lent all kinds of references (like the Members Only Jacket) to the episode. Unfortunately we experienced some audio problems during this episode which showed up in the final product. A fun episode otherwise. One that sets up something in Season 3… 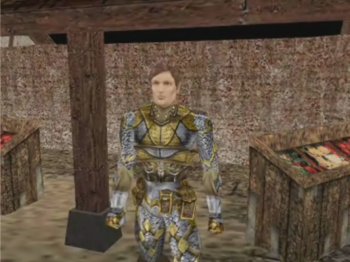 Writer’s Note: This episode is unique in that the vendor shown in this episode was original voiced by another voice actor, who later was removed from the project. A new voice actor, Sean, replaced the actor and redid the entire episode with us. There’s a few out there who are long time fans of Neverending Nights, who have the original release of the episode featuring the voice actor that was terminated from the project. Aside from that interesting fact, this episode is crucial to the series as this is the episode that Grayson gets the fiery sword – which we learn later – is much more than just a fiery magic sword. 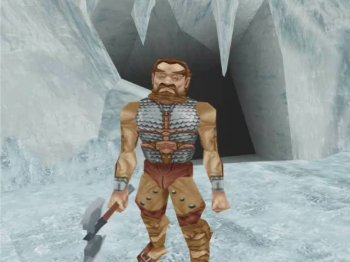 Writer’s Note: This episode is the one where Pawl the Dorf, first mentioned selling the map to Peter is finally seen. Pawl the Dorf becomes a constant member of the series from this point forward. This is the first episode that shows a goblin (Dink the Goblin). The next episode features the goblins who would go on to become one of the most popular things about Neverending Nights. 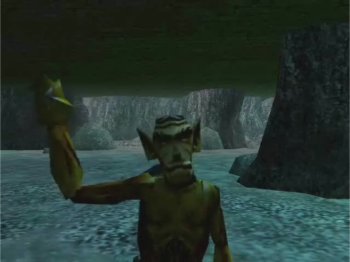 Writer’s Note: The title of the episode is a reference to the video game DDR. Also this is the first episode that features the main three goblins (Albert, Bob and Charlie) who would go on to become extremely popular in the series. Each of them is a representative of Grayson, Pawl and Peter respectively. Also, like the “respective doubles” they begin the naming convention (A, B, C…) 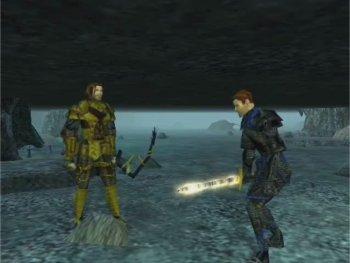 Writer’s Note:What happens when Pawl the Dorf loses the map to the inside of the cave – and things a bugbear (“troll!”) jumped out and surprised him? While being questioned by Grayson and Peter, Pawl the Dorf explains one of his unusual fears (considering he’s a dwarf). And of course, there’s the discussion of whether lighting a campfire in an enclosed space is a good idea. (Who says we never teach you anything watching our episodes?) Then there’s Marshmallows. There’s always got to be Marshmallows. 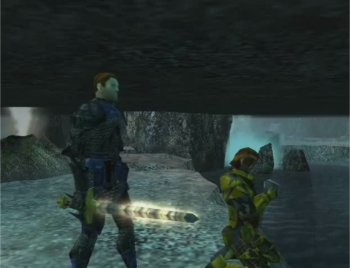 Writer’s Note: Things take a turn for the worse when Pawl the Dorf is nowhere to be found when Peter and Grayson recover from passing out. As if that weren’t bad enough, when Peter and Grayson find a stream to get some water; something begins to happen to Grayson. He begins hearing a voice in his head. Unsure of where the voice is coming from, it continues to berate Grayson about how useless he is. A mystery begins to unfold. And when it comes to finding a way out, Grayson’s not the only one getting strange communications – the fish in the stream apparently talk to Peter. (Watch all the way to the end, Pawl the Dorf continues to wander around the cave!) 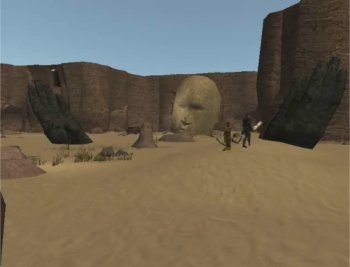 Writer’s Note: Peter and Grayson get lost in the Arreis Dessert. Grayson expresses his frustration with Peter always getting them lost (and there’s mention of the Poison Ivy again). The voice in Grayson’s head continues to berate him – which gives Peter a chance to explain how he’s had a voice in his head before and just ignores it. The voice in Grayson’s head explains how it was once a weapon for a great warrior and an ancient bloodline. Peter begins to deduce that Grayson has a voice in his head – so he communicates with it the only way he knows how to. And Peter earns a new title. 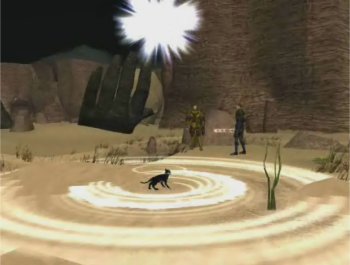 EPISODE 15: “Reach Out With Your Feelings…”

Writer’s Note: As if things couldn’t get worse for Peter and Grayson – well, things do indeed get worse for the dynamic duo. Having run out of food due to circumstances beyond their control – Peter turns to his Ranger Ability to Summon Animals. One of the pets he summons is a cat – a cat that belongs to none other than Alan the Astounding! (Remember him from Episode 06?) Peter continues to summon a number of animals until things get really out of control. 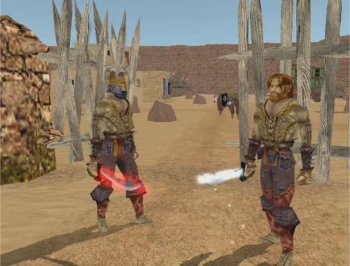 Writer’s Note: The episode begins with the guards, Vern and Douglas, talking about going off on some adventure, and begin talking about the infamous Dragon of Silver Lake. In the middle of their conversation, Peter and Grayson approach the City of Ator. Desperate for food and drink (having lived off on nothing but Pepper Flavored Salt), they meet two vendors selling Crab Juice. Conner and Lady Lorraine talk to Peter and Grayson about their adventures. Watch all the way to the end to see Pawl the Dorf run into the three goblins; Albert, Bob and Charlie. 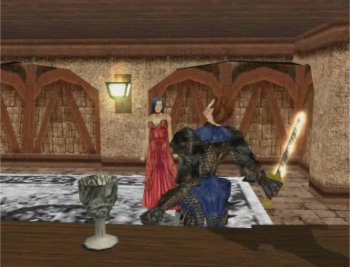 Writer’s Note: Peter and Grayson, still hungry head towards an Inn that serves “Broth.” While talking to the Bartender, Grayson orders some additional entertainment – unaware of exactly what he’s ordering. Peter and Grayson talk to the entertainer for a brief time, before Grayson leaves for the one on one show. Things, once again, only go downhill from there for our would be heroes. 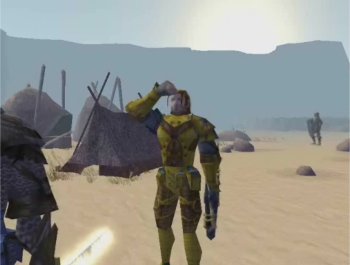 Writer’s Note: Peter and Grayson debate the idea of hiring about someone to be their villain (because every good hero needs a villain). While standing there in the City of Ator, they hear none other than Poppy the Salt Vendor who comments on their flashy armor. Poppy the Salt Vendor reveals that there’s a dragon cave just outside of the City of Ator. Before departing towards the dragon cave, Peter purchases some Pepper Flavored Salt… 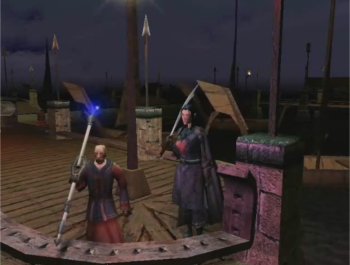 Writer’s Note: This episode doesn’t focus on Peter and Grayson this time! This episode focuses on Andrea the Assassin who takes in a hireling by the name of Daniel the Destructive. Andrea explains that she’s hunting down two men who have wronged her and stolen a magical sword from her. Daniel joins her in the crusade to find the two men and bring the would be thieves to justice. (Andrea communicates with a mysterious voice that she refers to as “Mother” that encourages her to keep Daniel the Destructive as a minion – who is this mysterious “Mother”…? Find out in Season 2, true believer). 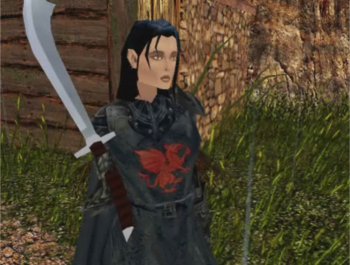 EPISODE 20: “Variety Is The Spice of Life… Death.”

Writer’s Note: The episode returns to the focus of Peter and Grayson, where Grayson continues to discuss how he thinks killing a dragon may not be as easy as they first believed. Peter dismisses the idea that it’s going to be difficult. The episode also focuses on Andrea the Assassin and Daniel of Destructive who are taking a short cut through the City of Desolation, where they encounter a creature who has brought about a foul curse… And be sure to watch past the credits to see Pawl the Dorf’s fate within the caves! 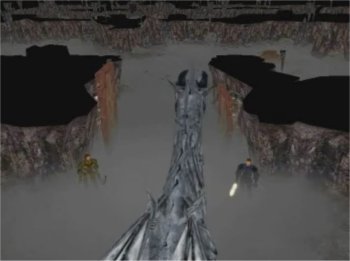 Writer’s Note: The episode has a montage that focuses on a number of characters who have been seen through the series so far; and when Peter and Grayson see the Knights who seem to be following them; they panic and believe the Knights are there to kill the Dragon of Ator before they do and steal their fame! Peter and Grayson rush out of the Bar and race up the Dragon Cave to try and track down the Dragon and finally become heroes. What they find will change their lives … forever.