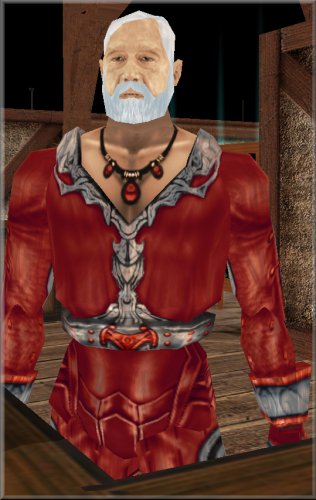 Race: Human
Occupation: Bartender of the Universe
Place of Birth: Tenderbar
Known Relatives: Mother (Unknown Name), Father (Unknown Name)
First Appearance: Neverending Nights – Seventeen: Heroes Bar & Keep
History: There’s much that isn’t known about “The Bartender.” Most speculate that he’s some kind of universal being – that he’s at every single bar, bartending and doing his job – all across the land, all at the same time. Whether he is some form of cosmic being, or he comes from a family of about three hundred known exact twins, remains unclear. And anytime someone asks him, he has a different story every time. (But then, it’s a bartender’s job to serve drinks and keep his clients entertained… so who knows the whole truth).

There are but a few scattered bars, where The Bartender is not actually the same Bartender seen at all the other bars. The reason for this has been endlessly speculated. Some have taken notice that The Bartender bares a striking resemblance to The Gift Giver; a man of legend, who supposedly flies all around the world in a single night, delivering gifts to those that have been good and well behaved. The Bartender, of course, typically declines any form of connection to the legendary Gift Giver; or depending on his patrons, sometimes creates elaborate stories about he has a twin who is The Gift Giver (and sometimes, if they’re really drunk, he will sometimes claim to be The Gift Giver himself).

One thing is certain; whether it’s one person, a hundred twin brothers, clones, or some form of Celestial Magic; the Bartender is always an endless source of information (if you know how to ask the right questions and tip the waitresses nicely). It’s even said, the very moment that the Dragon of Silverlake was defeated – that very second – every Bartender in every bar – raised their mug and claimed that all drinks would be free for the year.

NOTE: “The Bartender” has an unusual accent that has been known to rapidly annoy people. This could be so that clientele don’t keep asking him where he’s from. Or, he simply just had a bad accent.