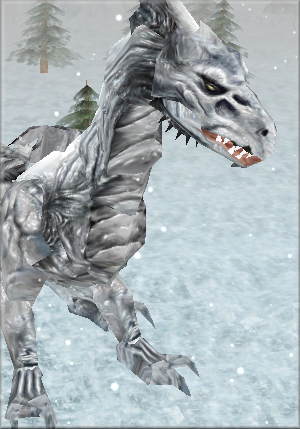 Race: Dragon
Occupation: Ruler of the Northern Wastes
Place of Birth: Unknown
Known Relatives: Ankalagun (The All Father of Chromatic Dragons – Deceased), Skatha (The All Mother of Chromatic Dragons – Unknown), Obsidian (Black Dragon – Sister), Crimson (Red Dragon – Sister), Emerald (Green Dragon – Sister), Cobalt (Blue Dragon – Sister)
First Appearance: Never Appeared In An Episode.
History: When the Platinum Dragon arrived in the World of Mortals, he brought with him light and life to the world. Skatha, the all Mother of Chromatic Dragons, seeking to devour the light, had tried to consume the rainbows that burst through the dark, dank clouds of the world. She tried so furiously to prevent any and all color to enter the world that she absorbed it into herself – in the end, becoming a colorful dragon herself – each head, representing one of the colors of the world – Red, for the fire; Blue, for the Skies; Green, for the grass and tress; Black, for the shadows created by the light; and White, for the pure snow in the Northern Lands.

Frostmourn claimed the Northern Wastelands, covered in endless waves of snow. It was here that she called home – and it was here that she reigned over the lands without mercy. Frostmourn the White was often thought to be the weakest of all the sister Dragons. However, she had a thirst for bloodshed like no other Dragon. She specialized in war, and leading her Frost Armies against any village within the Northern Wastes. Her soldiers knew when the time for war was upon them, because she would rear her head up and boom, “Frostmourn hungers!”

Frostmourn did not hide the rivalry between her and her sister, the Crimson Dragon and when news of her demise reached the Northern Wastes, she began scheming and planning to move her armies south, into the lands once ruled by her now deceased sister.

WEAPON: As a Dragon, Frostmourn’s frozen breath can freeze someone to the point of shattering their bodies like brittle ice.