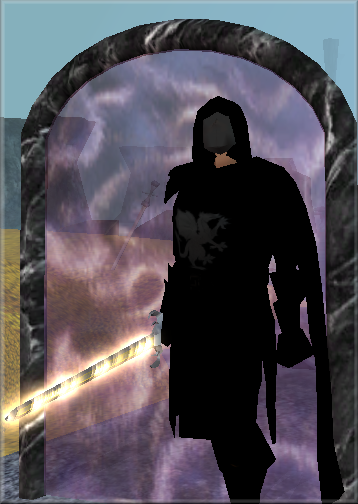 Race: Human
Occupation: Paladin
Place of Birth: City of Neverwinter
Known Relatives: Mother (Unknown Name), Father (Unknown Name), Wife (Human, Unnamed), Grayson (Human, Son), Wife (Elf, Unnamed), Peter (Half-Elf, Son)
First Appearance: Episode Thirty Eight: Mandatory Flashbacks
History: There is very little that’s known about The Mysterious Figure. All that is known is that he was a Paladin for a great King, who served his Lord and Master faithfully. During one of the first missions, he was assigned to stop a raid on an Elven village, where he would meet an unnamed female female elf, and fall in love with her. He left his King’s side, when he discovered that the Elf had become pregnant with his son. He stayed with her until the child was born; they had named him Peter. When Peter reached the age of 5, the mysterious figure returned to serve his King, when the King called upon him to help against marauding bugbears. Involved in a war with the foul bugbears for years, when he returned him, he found it abandoned, with no notification where his wife and son had vanished to. He searched for years, unable to find them, and when he was at his lowest, he met a human female bartender, who took pity on him and began talking to him. The two became very close, sharing similar pain, and eventually found that they had fallen in love. They married and had a son named Grayson, who the mysterious figure said he would be there for, and would not repeat the same mistake he had previously. But when his King called on him and he declined, his nights were restless with visions of the world burning, and so he eventually returned to the King to serve him against the newest threats rising – chromatic dragons! During a battle with the dragons, the mysterious figure was thought to have been killed, his sword – The Blade of Destiny falling into the hands of the villainous fiend. However, squabbling over the sword, let it to it being lost in a deep and vast lake, where it was eventually recovered, many years later (a story yet untold), and eventually came into the possession of his son, Grayson. The Mysterious Figure appeared again, alive, holding a similar flaming sword called The Avenger, when his two sons came face to face with the Crimson Draco Mother. When Grayson attacked the Crimson Draco Mother, it caused a massive explosion, that destroyed her and rendered almost everyone in the room unconscious. Grayson and Peter awoke in the Crimson Draco Prison, the fate of their father – unknown, much like his past.

Accessories: The Mysterious Figure was formerly one of the wielders of The Blade of Destiny – it is believed that it is has been passed down for generations. He now wields a blade called The Avenger.