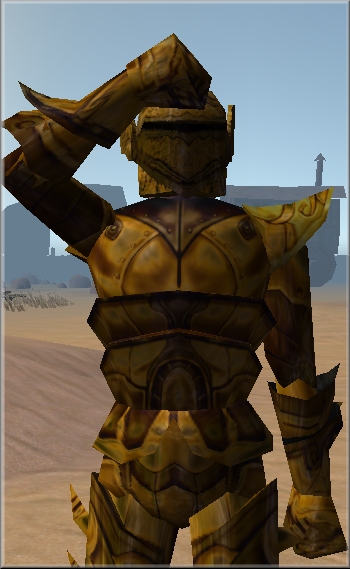 Race: Human
Occupation: Knight of the Bloodhunt
Place of Birth: Enspayne (Supposedly)
Known Relatives: Mother (Unknown Name), Father (Unknown Name), Kabewse (Brother)
First Appearance: Neverending Nights – Episode 1: Heroes?!
History: There are a number of mysteries that surround the Knights, Gariff and Kabewse. Though Gariff has told people that he was born in the distant, beautiful land of Espayne – there are no records that indicate his birth took place there. There is no record of his mother or father having ever lived there.

If one is to believe Gariff’s story, it’s that he and his brother, Kabewse, had always wanted to be Knights when they were older. Day in, day out, they had supposedly sat perched on their patio railing watching the Knights of the Bloodhunt train. Some have speculated that Gariff and Kabewse are not their real names, and that perhaps the Knights are sons to a King in some distant land (who had forbid them to become Knights because of the dangers that it entailed). To add to the ever growing mystery of the dynamic, knightly duo – they have never removed their mask – save for one time, when they had been question by the Captain of the Crimson Draco Legion in the City of Pomtom. Some Bards, such as Dimi, have claimed to have traveled with the Knights, and saw only a shadowed version of their faces, that were so horribly scarred that – for the first time in his life – words had failed him on how to describe it.

On the way to the City of Neverending, Gariff and Kabewse saved a woman who had been kidnapped by a tribe of barbaric trolls. At the Red Dragon Inn, they indirectly inspired (or perhaps intentionally so) Peter and Grayson to seek out their own adventure and become (in)famous – so that they could get free drinks at the bar, as these two Knights had.

Even stranger still, was that – the fact that where ever Peter and Grayson were – the two Knights could usually be spotted nearby. Whether they were walking around the City, or wandering around the various vendors in the City of Ator – the two Knights were never far behind. It was in the City of Pomtom, where the Captain of the Crimson Draco Legion suspected Gariff and Kabewse of being Peter and Grayson, since they wore the same colored armor. This was the first – time, confirmed – that the Knights had ever removed their helmets. Whatever the Captain of the Draco Legion saw in their faces, was enough to give him pause – and in the end, excuse them. Amiee the Armorer had contacted Ann the Armorer, in the City of Ator, to make armor that was exactly like Gariff and Kabewse’s, and was able to easily bypass the Crimson Draco Legion hunting party – who believed it was the two Knights that they had previously questioned.

The mystery of who they truly are, seems as though it will be forever shrouded in mystery. After the defeat of the Red Dragon, Crimson, both Knights seemingly vanished. There are rumors that the two Knights have traveled to other lands to inspire others to rise against the other Chromatic Dragon Orders around the world; but this has never been confirmed.

Accessories:
SWORD: Gariff is equipped with a long bow and sword.