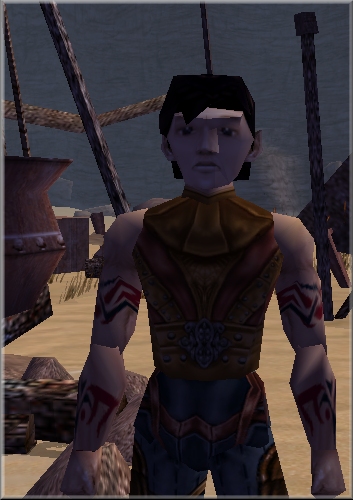 Race: Human
Occupation: Cook
Place of Birth: Florduh
Known Relatives: Lady Lorraine(mother), Father (Unknown Name), Pierce (Brother)
First Appearance: Neverending Nights – Episode 16: Dessert City?
History: Conner is the son of the beautiful Lady Lorraine. When the White Dragon named Frostmourn attacked Florduh, Lady Lorraine and Conner (along with the rest of the population) was forced to flee the land. The reasons for Frostmourn’s attack were never discovered; as Frostmourn was a Dragon of the North and ruled over the kingdom of Snowfall’s Edge. Regardless, having been born and raised in the hot, humid lands of Florduh, when they fled they moved to The City of Ator, whose hot, desert climate was similar to what they were used to. With nothing to call their own, Lady Lorraine, Conner and Pierce learned to make the best with what they had.

Pierce, who was younger than Conner, frequently slipped into the Dragon’s Cave behind the City of Ator, where he had discovered an underwater lake full of aquatic life. He would bring the fish and crabs to Conner, who learned how to cook them. With no (known) large bodies of water around the City of Ator, the citizens marveled at the constant supply of fish and crabs that Lady Lorraine’s sons provided, making this extremely rare delicacy very high in demand – and well worth a pretty gold coin or two! It did not take long for Lady Lorraine and her sons to be well off, with the money they made. While Pierce was in the Dragon Caves acquiring more fish and crabs, was when Peter and Grayson first ventured into the City of Ator. Dubious about the crab juice (that’s all that was left; the watery juices that the crabs had been cooked in), Grayson questioned where they were even getting crabs in this massive desert. Unwilling to reveal the location, fearful that these two would be adventurers would take over – Conner kept a tight lip and ended up convincing the two heroes that they should purchase the “crab flavored water.”

While Grayson was at the Inn getting a show with Madame Marie, Peter the Ranger ventured back out into the town and spoke with Lady Lorraine further; where he learned about the Dragon that had attacked the Kingdom of Florduh. This seemed like a likely place to begin search for the dragon that they would kill to become (in)famous. Peter promised Lady Lorraine that when they killed Frostmourn that he would share his part of the treasure with her so that she might once again live comfortably.

As fate would have it, Peter and Grayson would not go after Frostmourn. While in the City of Ator, they encountered Poppy the Salt Vendor who explained there was a Dragon in the Dragon Caves, just behind the City of Ator (and that’s why those caves were called “The Dragon Cave”). Peter and Grayson ventured into the Caves to seek out that Dragon instead.

But, Peter did not forget his promise to Lady Lorraine. When the Dragon of Silverlake was defeated, Peter sent a messenger to the City of Ator with a message for Lady Lorraine and her children to come to the City of Neverending, where he had purchased a home for her and her children to live in. Conner was hired at the Bar of Destiny to become the head Chef. While visiting the Bar of Destiny, Pierce had run into a man named Jon the Joyful and introduced him to his mother, Lady Lorraine. The two of them began speaking, and a few short years later, were happily married.

Pierce has vowed to one day return to Florduh and find Frostmourn.