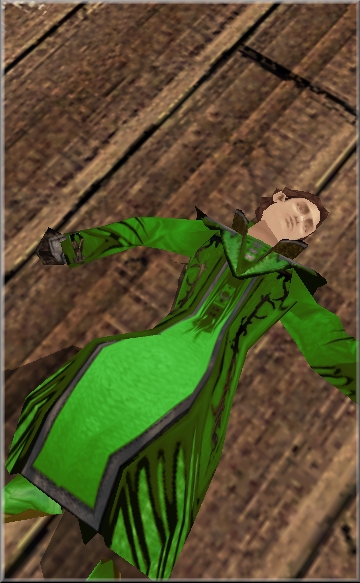 Race: Halfling
Occupation: (Would Be) Wizard, Entertainer
Place of Birth: Green Hills
Known Relatives: Mother (Unknown Name), Father (Unknown Name)
First Appearance: Neverending Nights – Six: He’s A Magic Man!
History: Rugged is the life of Alan the Astounding. Growing up in Green Hills, Alan was always very secluded, very much to himself. During this recluse behavior was when Alan discovered his father’s books of magic. His father had been a well known wizard, throughout the land! (Or at least known throughout Green Hills).

Alan became obsessed with magic, swearing that he would be the best known mage in all the land! (He would settle for Green Hills, first, however). By the age of sixteen, he was doing simple magic tricks that were often done at kiddy birthday parties. He swore that this was a start, just to help fund his magical career as a wizard.

Unfortunately, Alan never got past that. He actually became “the most well known wizard” – for kiddy parties. There wasn’t a family out there that wanted Alan the Astounding to amaze their kids with his simple magic tricks. After years of doing this, and realizing he was never going to be anything more than that, Alan turned to drinking.

Alan began drinking rather excessively (it would seem everyone in Neverending Nights drinks excessively!). One day, Alan was recruited for a kiddy birthday party – and he took the job. However, Alan was still extremely drunk.

While intending to merely light the candles on the cake, Alan’s magic went out of control and ending up burning down the home of a very rich client. The word about Alan got around, and soon enough he wasn’t even getting jobs for kiddy parties.

But Alan lived in a world of denial. He still considers himself to be the greatest wizard ever! (And he will actually deny ever doing kiddy birthday parties – rather, he has big tales of single handedly killing dragons while the rest of his party members ran around in the cave, utterly feared by the dragon)!

Alan the Astounding met Peter the Ranger and Grayson the Fighter in one of the many bars he had frequented (and near the tail end, where he had already drank so much that standing on his own two feet was more difficult than stopping the world’s rotation – which, to Alan the Astounding – was rotating far quicker than he had remembered). When he lapsed into unconsciousness, Peter the Ranger took Alan the Astounding’s pouch, with the intent of one day repaying the Halfling the money that was inside of it. (After all, according to Peter and Grayson, they were going to kill a Dragon and split 50,000 gold between them – which, according to their math – gave them each 20,000 gold).

To add insult to injury, while desperate for food, Peter had accidentally summoned Alan the Astounding’s pet Cat familiar. Alan (“the Astounding!”) was already hunting them down (with many frequent stops in every bar along the way) – but now he was Hell bent on Vengeance. (After just ONE more drink…)

When Alan the Astounding finally caught up to Peter and Grayson, they had their own bar – The Bar of Destiny – in which Grayson offered Alan a life time of free drinks (after discovering that Alan’s pouch that they had taken had been a magical pouch that produced an infinite amount of coin – which was how Alan the Astounding was able to pay for all of his drinks!) Alan (“the Astounding!”) accepted Grayson’s offer and now does part time tricks in the bar (only when sober, under very watchful eyes).

FAMILIAR: Alan the Astounding does have a feline familiar whom he named “Cat.”named “Cat.”