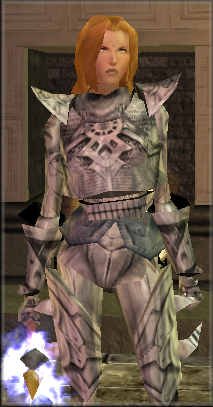 Race: Human
Occupation: Smith, Forger of Weapons and Armor
Place of Birth: Deeaygo
Known Relatives: Madame Marie (Mother), Awyer the Astral Traveler (Father), David the Delinquent (Brother), Jake the Journeyman (Husband)
First Appearance: Episode Sixty-One: ‘Reunited And It Feels So Good (Wait, didn’t we use that last season?)
History: Sam grew up with her mother, Madame Marie, one of the wealthiest and most respected women of Deeaygo. Sam’s father, Awyer the Astral Travel, not only traveled the Astral Plane gaining incredible knowledge and insight, but also traveled the world, sharing the knowledge he had discovered. It would seem that the entire family was blessed with skills of some kind, because Sam became one of the most respected and skilled forgers; capable of forging magic weapons without the actual use of magic; simply through skill alone. Most however, have made the mistake in assuming that Sam was male, because of the name and not a nickname for “Samantha.” As such, many were astonished – and the arrogant, often offended – that a woman was forging weapons – and forging them better than any man throughout the world.

She would play a key role in helping the world be rid of the Dragon of Silverlake, once and for all, when Pawl the Dorf, Peter the Ranger, Grayson the Fighter, and Amiee the Armorer came to her. She was able to teach Pawl the Dorf, who was the destined one to repair the Blade of Destiny – how it was to be done. With the blade reforged by Pawl, Peter and Grayson were finally able to put the Dragon of Silverlake down, once and for all.

Sam would eventually meet Jake the Journeyman and the two would fall in love. Sam tracked down Peter and asked if he could be the one to marry them. Honored, Peter returned to Deeaygo and performed the wedding ceremony (having taking classes from a local Cleric to become certified).

Accessories: At any given time, Sam can have a magical weapon, of any kind, at her ready.