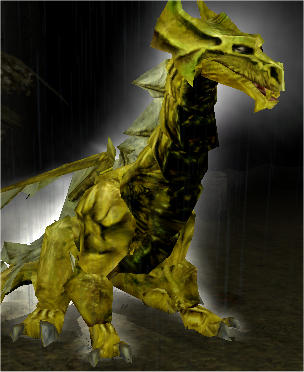 Race: Dragon
Occupation: Guardian of the Sands
Place of Birth: The Sands of Sottamine
Known Relatives: Auric (Gold Dragon – Brother), Stoneclaws (Bronze Dragon – Brother), Skywing (Copper Dragon – Brother), Argent (Silver Dragon – Brother), Platinum (Platinum Dragon – All Father)
First Appearance: Never actually appeared in the series – yet…?
History: Thousands of years, the Order of the Dragons – Chromatic (Black, Blue, Green, Red, and White) and Metallic (Brass, Copper, Gold, Silver, and Bronze) swore that they would not influence the World of Mortals. However, the Chromatic Dragons were deceitful in their promise to leave the Mortal World and soon returned to it.

Furious with his brother, Sandscale followed shortly after – and sought his brother out, but could not find him. (Unaware that Auric had taken up a human form to help nudge those who had the Blade of Destiny – Grayson and Peter).

Eyes: Brass
Hair: None, Scales made of Brass

Accessories: Sandscale, like all dragons, has a powerful dragon breath.