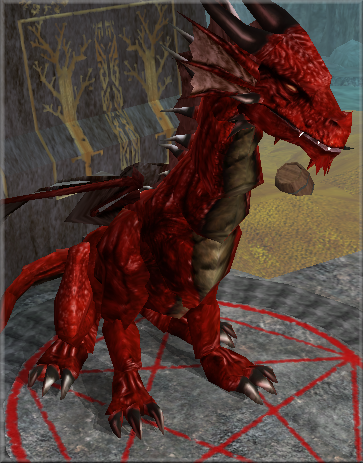 Race: Dragon
Occupation: Red Dragon, Leader of Crimson Draco Legion
Place of Birth: Realm of Dragons
Known Relatives: Ankalagun (The All Father of Chromatic Dragons – Deceased), Skatha (The All Mother of Chromatic Dragons – Unknown), Obsidian (Black Dragon – Sister), Cobalt (Blue Dragon – Sister), Emerald (Green Dragon – Sister), Frostmourn (White Dragon – Sister)
First Appearance: (Voice Is Heard) Episode Nineteen: ‘The Hunt’, (In Human Form) Episode 38: Mandatory Flashbacks, (In Dragon Form) Episode Fourty-Two: ‘Oh Mother Dearest’
History: Over two thousand years ago, Dragons roamed the world. During this time, the Chromatic Dragons (Black, Blue, Green, Red, and White) was at constant war with the Metallic Dragons (Brass, Bronze, Copper, Gold and Silver). The resulting War of Dragons changed the land so much, that both sides realized that soon there would be nothing to fight over. The Dragons made the agreement to leave the Realm of Mortals and return to the Realm of Dragons.

For one thousand years after this peace treaty, Dragons had become a thing of myth. However, the Chromatic Dragons had been deceitful in their agreement. They had returned to the World of Mortals, in the guise of humanoids (pretending to be humans). Disguised as humans, they began creating Legions of Soldiers that swore to their Order. The idea had been to create one large Legion to challenge the Metallic Dragons and destroy them; but the Chromatic Dragons in their greed, could not even trust one another – and thus factions were created. Crimson, the Red Dragon, created her legion – The Crimson Draco Legion.

Of all the Chromatic Dragons, Crimson was clearly the most powerful as well as the most deceitful. She purposely sought out those who felt spurned by other humans, and like her fiery breath – she forged that hatred into loyalty to her cause, as she promised the one thing each of them always wanted – revenge. One of those people was a sweet, young woman by the name of Ruth. She sensed much anger simmering in Ruth’s heart and used it to make her loyal. Ruth quickly rose through the ranks of the Crimson Draco Legion. The only person to hold a higher position was The Crimson Captain.

Crimson entrusted her with the mission of finding the Blade of Destiny – said to be forged by the Dwarves when Dragons still walked the world. Rumor had it that it could kill Dragons, in the hands of the ‘Bloodline.’ Ruth, who had changed her name and appearance (to look and sound more menacing) to Andrea the Assassin – had tracked the blade down to a vendor named Ronald, within Stonefrost City. She questioned him about the blade, and once she learned that he had sold the blade only a few weeks ago – she killed him.

Andrea sent a message to Crimson, who then informed her to seek out Daniel the Destructive. Together Andrea and Daniel tracked down the new owners of the blade. However, in a twist of fate, Grayson – who happened to be a part of the Bloodline – found courage in his heart and struck the blade deep into Crimson’s chest, causing a massive explosion.

Crimson had been slain.

WEAPON: As a Dragon, Crimson was capable of ancient magic. She also possessed a fiery breath weapon that was said to be hotter than any known fire.