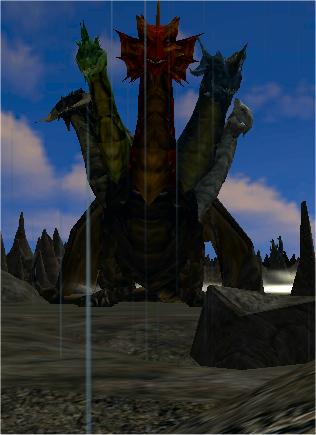 Race: Dragon
Occupation: Chromatic Mother, Would Be Destroyer of the World
Place of Birth: Realm of Dragons
Known Relatives: Ankalagun (The All Father of Chromatic Dragons – Mate, Deceased), Crimson (Red Dragon – Daughter), Obsidian (Black Dragon – Daughter), Cobalt (Blue Dragon – Daughter), Emerald (Green Dragon – Daughter), Frostmourn (White Dragon – Daughter)
First Appearance: Never Appeared In The Series
History: There are as many legends as there are as many years since her sighting about Skatha – the Chromatic All Mother. The most common legend speaks of an Age before Mortals, in which Skatha roamed the would. She was said to be made of only darkness and evil, with no light to her soul. When the Platinum Dragon arrived, he brought with him light and life to the world. Skatha, seeking to devour the light, had tried to consume the rainbows that burst through the dark, dank clouds of the world. She tried so furiously to prevent any and all color to enter the world that she absorbed it into herself – in the end, becoming a colorful dragon herself – each head, representing one of the colors of the world – Red, for the fire; Blue, for the Skies; Green, for the grass and tress; Black, for the shadows created by the light; and White, for the pure snow in the Northern Lands.

With them, she was able to throw the Platinum Dragon unto the world, where he struck with such force that he was buried in stone. But it was there, as he bled, that he gave life to his own sons – the minerals of the world sought to heal him, sensing the life he had brought with him – so the world gave him The Silver Dragon, The Copper Dragon, The Brass Dragon, The Bronze Dragon and the Gold Dragon – all of which rose from the world and released him from his stone prison.

The Dragons waged a war so violent that it began to tear the very fabric of the world apart. The Platinum Dragon and Skatha took their battles to the Heavens, where in an explosive bright flash – their climatic battle, supposedly came to an end – sending their remains out through the skies – their scales, becoming individual stars that light the night – always looking down upon the world.

WEAPON: as the Chromatic Mother, her Gift was Death.