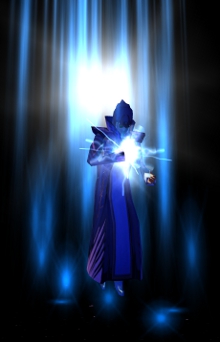 Alred was born and raised in Goldenstep.  His mother was a wood elf, and abandoned him and his father shortly after birth to return to the forest.  His Father raised him until maturity, when he sent him to live and work at the local mage’s school as a laboratory assistant.  His father left after Alred’s 25th birthday and went in search of his mother in the Elvenwood as was culturally acceptable.

Alred was clumsy.  He started a fire in the south chamber of the mage school in the alchemy wing when disposing of some chemicals that should not have been mixed.  His master was fed up with Alred’s clumsy nature and as punishment, sent him to work as the illusionist’s assistant.

His new master, the school’s illusionist, was a cranky old half-elf woman who always had a thing for those youngsters working under her.  The only thing she did not count on was getting a assistant who wasn’t much younger than she was.   Alred was a “teenager” in elf terms, even though he was just younger than the illusionist who was in the end of her half-elf years (both were around 175 years old).

Alred had a knack for knowledge.  He would consume information night and day and because of this, he was socially awkward.  With his knowledge consumption, he had gained as much knowledge as the old illusionist he was studying under.  What started as an awkward and flirty treatment toward Alred grew slowly into genuine respect for Alred and his amazing retention of knowledge.  After twenty years, the illusionist had taught everything she knew to Alred, as well as her amazing sense of wardrobe color.  Due to monetary issues, the school was closed down and the building was bought by the Goldenstep Library and converted into the library’s Western Branch.  Alred was on the street for the first time in two hundred years, though he adapted very quickly.

Alred got hired on with a subsidiary of the Dark Tide as a scribe for a mapping project of the Palace District of Goldenstep.  Unless sanctioned with a permit from the Office of the High Lady, mapping is illegal, especially mapping of the Palace District.  A local guard unit was on an unscheduled round of the city wall where the subsidiary unit was located.  Alred took immediate action, casting an illusion over the walls of a nomadic barbarian tribe charging the wall.  This illusion was so realistic that the guard was fooled and a full unit was called to attack the forthcoming barbarian charge with the guards finding themselves cutting through nothing but air.  Having caught Dimi’s attention, Alred was immediately told to report to Dimi’s personal chamber where he met his three newest companions.