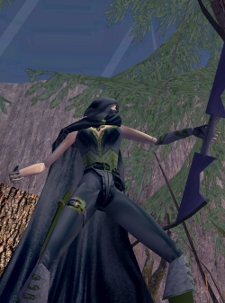 Not much is known of Ensign by the general public.  She has removed herself from any records available and keeps a low profile to avoid attention.  The few people who do know of her and her existence merely know her as “Ensign.”  Those that don’t know her see just another ranger in the northlands passing by.  Nothing about her stands out except for her brilliant blue-green eyes which are far more beautiful than any other, including other elves.

Ensign’s history is not too interesting.  Her reasoning for keeping a low profile is that it prevents anyone in any capacity of know who she is or where she is at giving her the upper hand in any situation, but in all honesty, she just wants to be left alone.

Ensign was raised by an older human couple; She never knew her real parents.  Her human parents purchased her from a nomadic tribe who intended on selling her into slavery.  The elderly couple was sympathetic to the baby elf and desired her to serve a life as she wished, not one of slavery.  As to where the nomadic tribe acquired the elven infant, nobody knew.

Her father was a seasoned veteran who had retired and opened up a small blacksmith in a mining village in the Mountains just north-west of Goldenstep.  He spent most of his time re-shoeing horses and fixing wagon wheels.  After his service in the Goldenstep Guard, this simple life was all he wanted and it gave him and his wife peace of mind.

As Ensign grew in the small mountain village, she would spend all of her play-time in the wilderness surrounding it.  Her parents discouraged it at first, but they eventually realized it was in her blood and the wilderness is where she belonged.

Her Father, being a retired military man, always called her “Ensign” instead of her real name.  Ensign in turn would call him “Captain.” This father-daughter exchange was so common between them that most people only know her as “Ensign.”  People now only know her as Ensign, where she is often made fun of for the name and its military reference.

She hides a certain part of her life, one that nobody will ever know.  As a result of this hidden portion of her life, she came out of it with a vengance against the city of Goldenstep.  It was this time in her life that caused her to constantly keep a low profile.  Although, not even a highly skilled ranger can hide from the eyes of the Dark Tide.

Dimi caught sight of her one evening on his evening stroll through the city.  Ensign was pulling small pranks on the local on-duty guards.  This intrigued Dimi, so he watched for her every evening on his stroll.  Dimi was impressed by her cunning tactics and amazing escapes.  She would never get caught and the guards would have no idea what was going on.  This could prove useful for Dimi and the Dark Tide.

Dimi approached Ensign several times, but Ensign would always disappear before Dimi got to her, or she would simply avoid him in a large group of people.  Finally, Dimi trapped Ensign.  She was perched on a rooftop, waiting for the guard to walk beneath.  After she accomplished her mission (prank), she turned and there Dimi was standing on the roof between her and her only escape route.  Admitting defeat and admiring Dimi’s enduring attempts at getting hold of her, she agreed to meet with him in his private chamber the next evening.