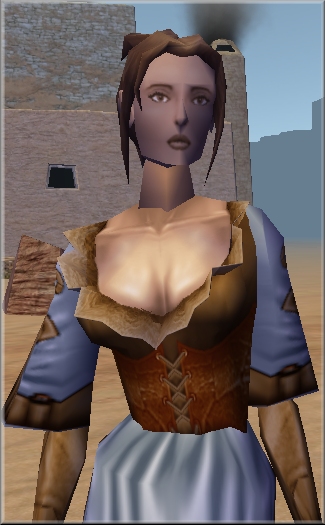 Race: Human
Occupation: Writer, Cook
Place of Birth: Florduh
Known Relatives: Mother (Unknown Name), Father (Unknown Name), Conner (Son), Pierce (Son), Jon the Joyful (Husband)
First Appearance: Neverending Nights – Episode 16: Dessert City?
History: Lady Lorraine was one of the premiere scribes in the city of Flurduh, where she penned such stories as World at War, Falling off the Edge of Darkness, I Will Stand And Die With You, and A World Beyond This. She was penning the final pages of her latest novel, The Death Knight Cycle when her entire life was drastically changed forever.

Though Flurduh was a large, humid land, with swamps all about – it suddenly found itself under attack by a White Dragon named Frostmourn. Though dragons had not been seen in the lands for several thousand years; there were always stories about the return of the Chromatic Dragons to the world of mortals. What marked this more unusual than siting a dragon to begin with; was the fact that the White Dragon was a Northern Dragon, preferring a land filled with snow and frost. Lady Lorraine watched as men, dressed in armor with a white dragon crest, known as The Legion of Frost, marched into the city and began to ransack it. Lady Lorraine quickly gathered her two sons, Conner and Pierce, and along with the rest of the population of Flurduh, fled.

The trio eventually took up residence in the City of Ator, when their money ran out and they could no longer afford to travel onward. Pierce, who was still extremely young, ventured into the caverns behind the City of Ator, to see if they could take shelter and live there, since they could not afford a home in the City of Ator. What he discovered was a massive underground lake full of various aquatic life. He managed to catch some fish and crabs and brought it down to his mother and brother so that they could eat. When they began cooking the fish and crabs, they got the attention of other citizens who had never smelt such food. Curious to purchase it and try it, they began paying large amounts of money for it.

This eventually provided Lady Lorraine and her sons with enough money to purchase a small home in the City of Ator, where they continued their business, never sharing the secret of where they were getting the fish and crabs from.

While Pierce was in the mountain getting more fish and crab to sell, Lady Lorraine met Peter and Grayson who – like the other citizens of Ator – had been drawn by the smell of something being cooked. However, Lady Lorraine had just sold the last bit of fish and crabs only minutes before their arrival. Conner, thinking quickly, offered Crab Juice as an alternative (which was merely the steamed water that the crabs had been boiled in). Peter and Grayson accepted, eventually and departed.

However, while Grayson was being entertained in his room by Madame Rainbow, Peter returned to Lady Lorraine to speak to her again. That’s when he discovered that she and her sons had been displaced by the arrival of a white dragon named Frostmourn in her city. This, Peter had thought, was the lead that they needed. They now knew where to go and find a dragon. Peter had promised Lady Lorraine that he would find Frostmourn and kill the dragon, however, as fate would have it – they also discovered that a dragon apparently resided in the mountain behind the City of Ator.

Lady Lorraine was pleasantly surprised, when several months later she received a message from Peter the Ranger that the Dragon of Silverlake had been defeated and that he had purchased her a home in the City of Neverending, for her to continue her work as a scribe. She accepted Peter’s offer. Conner was hired at the Bar of Destiny to become the head Chef. While visiting the Bar of Destiny, Pierce had run into a man named Jon the Joyful and introduced him to his mother, Lady Lorraine. The two of them began speaking, and a few short years later, were happily married.

Pierce has vowed to one day return to Florduh and find Frostmourn.

Accessories:
NO WEAPONS Though Lady Lorraine wields a pen, and as they say – the pen is mightier than the sword.