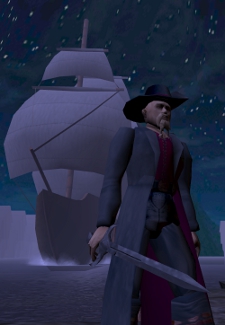 When it comes to history, Herald’s past is not very important at all.  In fact, it isn’t even that exciting.  Herald is a human who has just recently passed “over the hill.”  He is an average built man using an average weapon with an average style… though his profession is where his life is truly interesting.

Herald found his way to the city of Bucsden nearly ten years ago.  He had the desire to live a more exciting life than he had been up to that point.  He was an accountant in his early life, teaching people how to spend their gold and saving it for them as well.  He would spend most of his day working behind a desk or in the vault in his city’s local bank.  Every evening he would return to his home in the top floor of a small tavern just across the way from where he worked.  His place had a nice cozy bed with a small desk under the window.  He would hang his clothes in the small armorie behind the door into his room.  Other than that, his room was empty.

Herald grew tired of doing the same thing every day and getting paid very little for what he did.  He would spend hours devoting his time to helping others spend more gold than herald would get paid in a year’s time.  The gold was the only thing he enjoyed about his life.  Every time he would walk into the bank vault, he would dream of grand adventures where the spoils could double the size of the bank’s gold storage.  So, one day, Herald decided he would leave this life and pursue a life of excitement.

He purchased passage on the first ship he could find sailing from the local harbor.  He carried a small bag at his side which was full of gold and even a few platinum pieces.  This pouch was filled with the gold of the bank’s vault.  It was his first excitement in his life.  Carrying stolen gold from a bank, gold that he stole, made him feel alive.  Overhearing the crew, he caught wind of town called Bucsden, the second stop on their way North.  The two crewmen discussed the city, describing it as the a scum town filled with pirates and adventure seekers.  The two went on and on about how awful the place was, all the while intriguing Herald.

The ship pulled into the Bucsden Harbor, dropped their goods and stored fresh water for the three day, non-stop, trip ahead of them.  Though, when they left the Harbor, they were short one passenger.  As Herald walked through the city of Bucsden, he saw his adventure unfolding in front of him.  He took in the sights and sounds as one would consume candy.  He had found his place, now he just had to find himself.

His stiff and proper suit made him stand out in the crowd.  The relentless, sarcastic cat calls were embarassing.  If he wanted to fit in here, he would have to lose who he was and forge a new persona.  He found the nearest tailor and fitted himself to the most authentic “pirate” garb he could find, but it still wasn’t complete.  After spending several nights in a local tavern, he found a trench coat left inside after it’s occupant was thrown out the window.  Yet, it still needed something else.  Finally, after walking down the main boardwalk, something caught his eye.  It was a hat in the window of an armorer shop, and Herald the Pirate was born.

Herald purchased a large ship with his stolen bank money and hired on what he thought was an exquisite crew.  This was his ticket to the world.  With his new ship, that he adequately named the “Doom Thingy,” he was now able to do what he desired most:  Look for treasure and adventure.

Herald and his crew were quite successful for many years.  They had found many treasure coves and abandoned ruins with rare artifacts.  Though, even through all his success, nobody considered him a real pirate.  Herald didn’t have the heart to senselessly plunder and loot as most pirates would.  Instead, he prefered to use tactics of intimidation, cunning strategies and devices, and pure luck.  Herald was determined to impress the others and make his name known as one of the great pirate captains.

Herald decided to pursue a myth of a great city of ruins of the Civilization of Old which is claimed to have unspeakable amounts of treasure and artifacts.  If he were to find this place and bring back all he could carry on the Doom Thingy, then perhaps the others would start treating him like a true pirate (or he could just pay them to  respect him as a pirate).

His adventure took him up the River Rowlvin, beyond the city of Goldenstep deep into the Elvenwood.  Herald found what he was looking for, though it changed him.  He saw his crew, whom he had known for many years, perish before his eyes at the hands of an evil lich who ruled over the ruined city of treasure.  If it wasn’t for Herald’s genius and crafty nature, he wouldn’t have escaped to tell his tale.  He barely managed to steer his ship back to Goldenstep, where he was approached by a member of the Dark Tide with an invitation to meet Dimi in his private chambers at the White Feather Tavern.