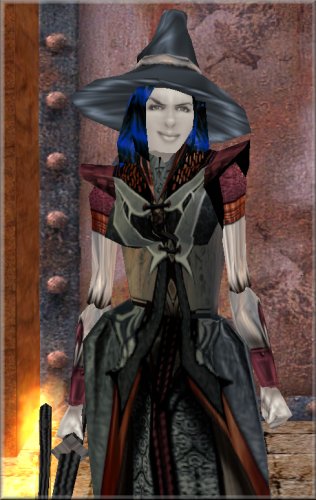 Race: Human (Supposedly)
Occupation: Most, Evil, Vile, Malicious, Treacherous, Conniving Person Alive
Place of Birth: Jahina
Known Relatives: Mother (Unknown Name, Deceased), Father (Unknown Name, Deceased), 9 Sisters (Unknown Names, Deceased), 1 Brother (Unknown Name, Deceased)
First Appearance: Neverending Nights – Thirty Two: Employment Opportunities
History: Born on the distant lands of Jahina, Evil Foo grew up in an Oriental Culture that favored boys over girls. As such and being the tenth child to be born a female – the family believed they were cursed and named her “Evil Foo.” Like her other sisters, Evil Foo was not cared for. When her father and mother finally had a son, the rest of the daughters were literally forgotten and expected to fend for themselves. Evil Foo was filled with so much rage that she turned to Kazakistan – The Dark Magic. She summoned a Demon, who appeared to be man; with a face full of horns, and facial expressions that were extremely exaggerated and twisted in horrifying ways. Still, this did not discourage her. She voiced her anger about her family with the Demon, and struck a deal. The Demon gave her a whip, whose tip was doused in Hellfire. The Demon explained that those she killed, would have their souls ripped from their body; and the Demon would snatch their souls as quickly as he could and punish them in Hell.

Evil Foo first went into her brother’s room and used the whip to strangle the life from him. She then killed each of her sisters, one by one, sending their souls to Hell. Then she went to her parents – and unlike how she had killed her siblings in their sleep – she woke up her parents, explained how she had killed her brother and sisters – and explained the deal she had made with the Demon – and then proceeded to kill her parents with the whip as well.

When she was done, she summoned up the Demon once more to close the bargain. However, at the last minute, she changed her mind and betrayed the Demon by killing it as well – condemning the Demon to Hell. Now broken free of the Demon’s contract, Evil Foo burned the house down and let people assume that she and her family perished in the fire.

Unaware that the whip has a ‘soul’ of its own, it fed off the ‘darkness’ within Evil Foo’s soul. Traveling across the land and sea, she committed heinous crimes. When she arrived in Blackmire City, she saw a job posting for hiring a villain. All too eager to continue her atrocious crime spree, Evil Foo applied; only to discover it was two would be heroes named Peter and Grayson, looking to hire a villain to stop. As it turned out, it was the easiest job Evil Foo could ever take – simply going around spreading the word about Grayson and Peter and their heroic deeds.

This drew the attention of Andrea the Assassin, who had been tracking down Peter and Grayson for several months. Andrea the Assassin pressed Evil Foo for information, which she was unwilling to give – and, in one swift move – killed two of Andrea’s goblin assistants – Dink and Ellen. Andrea, in turn, tired of trying to get information from Evil Foo – killed her.

In a twist of fate, the whip – who had a ‘soul’ of its own – ensnared Evil Foo and drew her into the very Hell that she had created to murder her family and the Demon. The Demon informed her that she had been fortunate that he could no longer capture the souls of those she murdered after his demise.

The Demon, still the ruler of the Hell that had been created, enslaved Evil Foo so that she was bound against a burning wall of flame forever to see how she had murdered her family – for all eternity.

Eyes: Blue
Hair: Dark Blue (Some Call It “Anime Blue” in her homeland of Jahina)

NOTE: Her primary weapon is a fiery whip which housed a fiery demon within it that she could unleash and command – and that only her powerful will keeps this demon in check. With the demon slain however, the whip’s evil continues to corrupt those who use it. Previously when chained to the Demon, souls that had been killed were collected by the Demon to torture. However, when Evil Foo killed the Demon, it broke the Demon’s ability to collect souls of those who met their demise by the weapon.