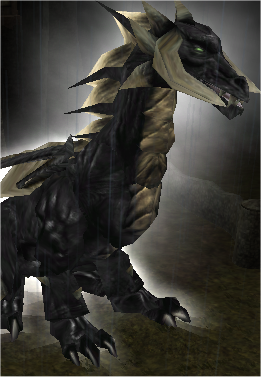 Race: Dragon
Occupation: Terror of the Tenacious Swamps
Place of Birth: Avas
Known Relatives: Ankalagun (The All Father of Chromatic Dragons – Deceased), Skatha (The All Mother of Chromatic Dragons – Unknown), Emerald (Green Dragon – Sister), Crimson (Red Dragon – Sister), Cobalt (Blue Dragon – Sister), Frostmourn (White Dragon – Sister)
First Appearance: Never appeared in the series
History: When the Platinum Dragon arrived in the World of Mortals, he brought with him light and life to the world. Skatha, the all Mother of Chromatic Dragons, seeking to devour the light, had tried to consume the rainbows that burst through the dark, dank clouds of the world. She tried so furiously to prevent any and all color to enter the world that she absorbed it into herself – in the end, becoming a colorful dragon herself – each head, representing one of the colors of the world – Red, for the fire; Blue, for the Skies; Green, for the grass and tress; Black, for the shadows created by the light; and White, for the pure snow in the Northern Lands.

Emerald claimed the Evergreen Forest as her domain; a land, prior to her arrival that had once been ruled by Elves. Emerald attacked and destroyed the Elven cities within the woods, and earned the name ‘Emereth’ among the Elves, which translated meant ‘Green Death.’ With Emerald within the Evergreen woods, the very forest around her began to die and become as tainted as her evil heart. Her very breath contaminates and changes the plants; from a vibrant green, to a murky, almost swamp like life – dubbing the lands The Dark Woods. The Elves who survived Emerald’s attack have sworn to one day retake their home; but for now, they have fled to the City of Neverending, where they have been forced to adapt to living like humans.

Eyes: Black
Hair: None, Scales Black (as if made of shadows)