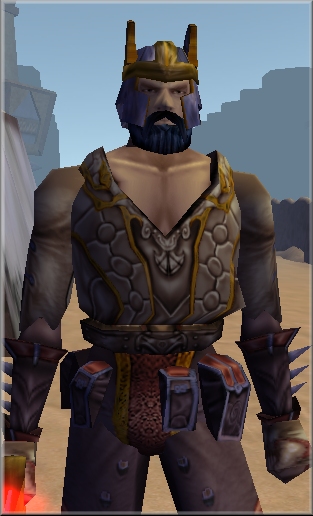 Race: Human
Occupation: Protector of Ator, Guard
Place of Birth: City of Ator
Known Relatives: Mother (Unknown Name), Father (Unknown Name), Douglas (Brother)
First Appearance: Neverending Nights – Episode 16: Dessert City?
History: Vern was born and raised in the City of Ator. He has a older brother named Douglas, whom he is quite different from. Where as Vern enjoyed the peaceful life, having a wife and kids, Douglas was the one who was scaling the walls of the Atorian Caverns, venturing out past the Gates of Ator, and into the dry, humid desert land for days on end, surviving on only his wits.

When an old man, with silver eyes and silver hair, named Dean came to the City of Ator and warned them that a blue dragon, by the name of Cobalt was near by, none – save Douglas – listened to what the old man had to say. Vern on the other hand thought the old man was suffering from Dry Madness – a madness that sweeps those who have been lost too long in the desert without proper food and water. After all, there had been no dragons seen for thousands of years upon the World of Mortals. Still, this inspired Douglas’ imagination, that he might one day fight and defeat an evil dragon, like the ancient stories once spoke of. When Douglas asked Vern if he thought the story could be true, Vern scoffed and said, “That wizard is just a crazy old man.”

However, a few short years later, the blue dragon Cobalt made its attack on the City of Ator – none were ready. It wasn’t until Dean, the silver haired, silver eyed wizard changed into the form of a silver dragon and roared – that it startled the Blue Dragon enough to drive it away. The City of Ator immediately enforced a draft, led by Commander Craig, to help protect the City. The Wizards of Ator, worked feverishly now – rather than seeking ways to improve their powerful spells – to crafting magical items against such magnificent and terrifying beasts. Douglas was one of the first soldiers to rise in the ranks under Commander Craig’s leadership.

Cobalt has yet to attack the City of Ator again; but Dean had warned them that Cobalt nearly succeeded the first time, because Dragons have been gone from the World of Mortals for so long, that Mortals became complacent. Now was the time to be ever vigilant.

While not one for adventure, or even fighting, Vern also joined the City of Ator Army, if for no other reason than to protect his family. Now, more often than not, Douglas and Vern are the Guardians of the Gates of Ator – the first line of defense against any attacking force.

When Peter and Grayson ventured to the City of Ator, they were greeted by Vern and Douglas and cleared to enter the City.

Accessories:
SWORD: Vern, as all guards of Ator, was provided a magical weapon. Vern’s blade is able to burn an opponent with its searing blade.