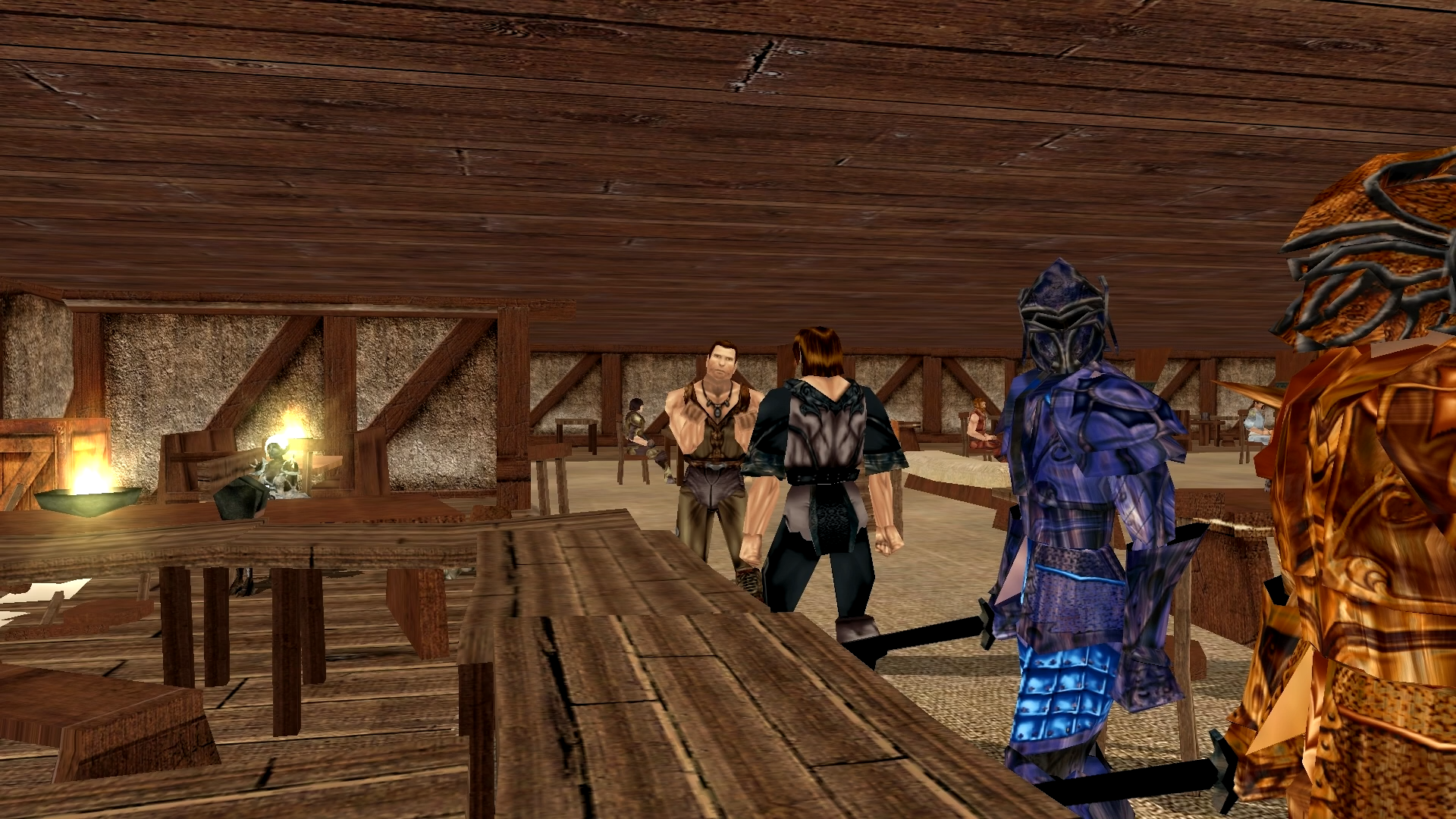 EPISODE 01: HEROES?! – Peter and Grayson sit at the bar that belongs to Peter’s Uncle, pondering the purpose of their lives, when two adventurers in full armor, come in and talk about saving a damsel in distress – which inspires Peter and Grayson to try their hand at becoming heroes… Well, that is until they take another drink, and decide that the idea of becoming a hero is entirely too dangerous. 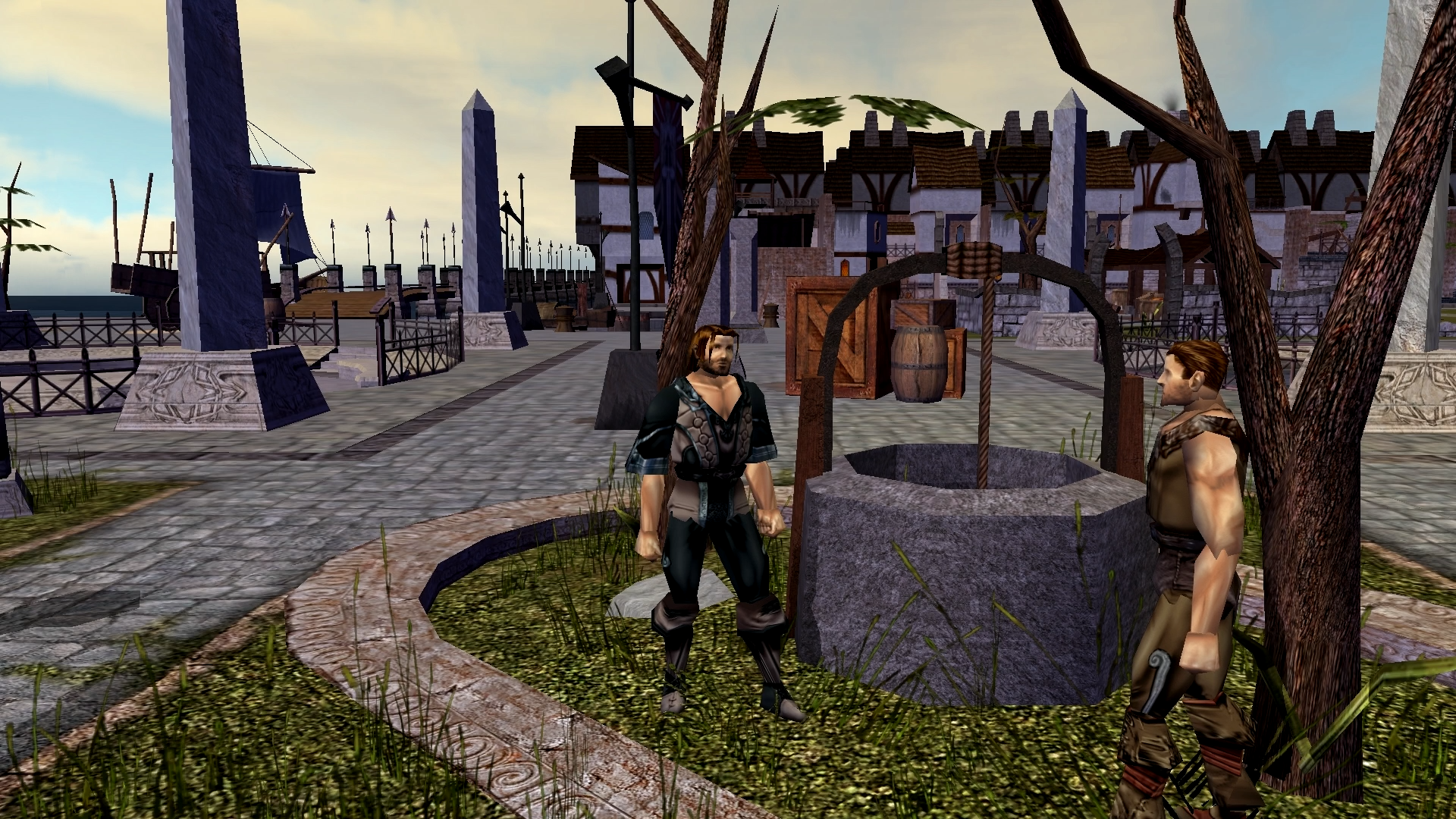 EPISODE 02: 20k?! – Having run out of money (and run their tab entirely too high), Peter and Grayson are forced to fetch money from their “treasure chest.” While doing so, a pair of Gnomes walk by and discuss how they had seen a dragon up on a hill. This, once again, inspires Peter and Grayson to think about becoming heroes. They discuss the stories they’ve heard about the hero who killed the Dragon of Silverlake and how much money they had gotten from the Dragon’s treasure. The idea of so much gold, meaning so many drinks – Peter and Grayson believe they have what it takes to slay a Dragon and become heroes themselves! 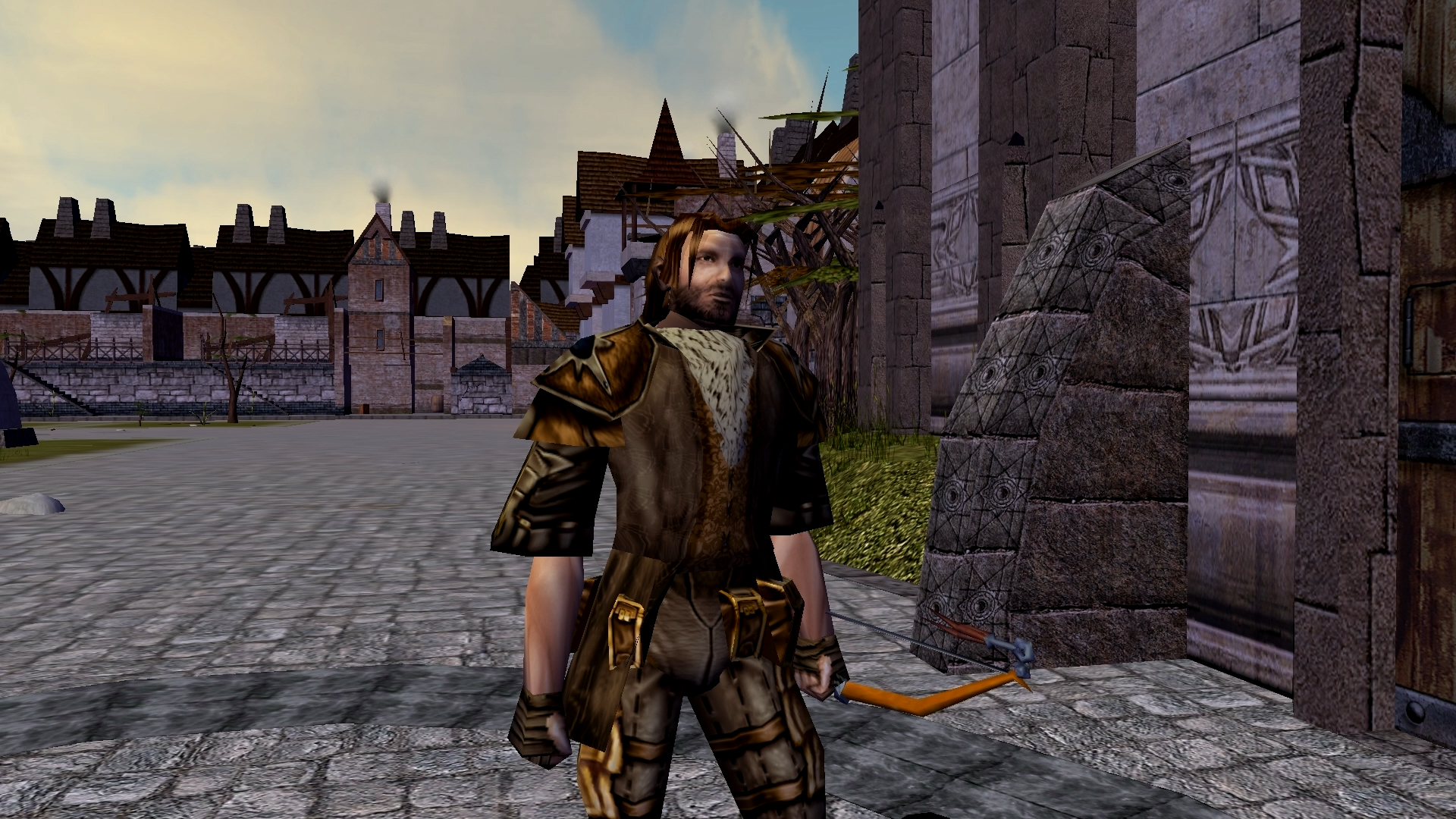 EPISODE 03: COME ON BABY, LIGHT MY FIRE – Gathering what they have for armor and weapons, Peter and Grayson meet at the front gates of the City of Neverending to begin their adventure. Following a map purchased from Pawl the Dorf’s “cousin” they venture forth into the woods and begin what they believe is their legacy as heroes… Now, if it were only so simple as that! 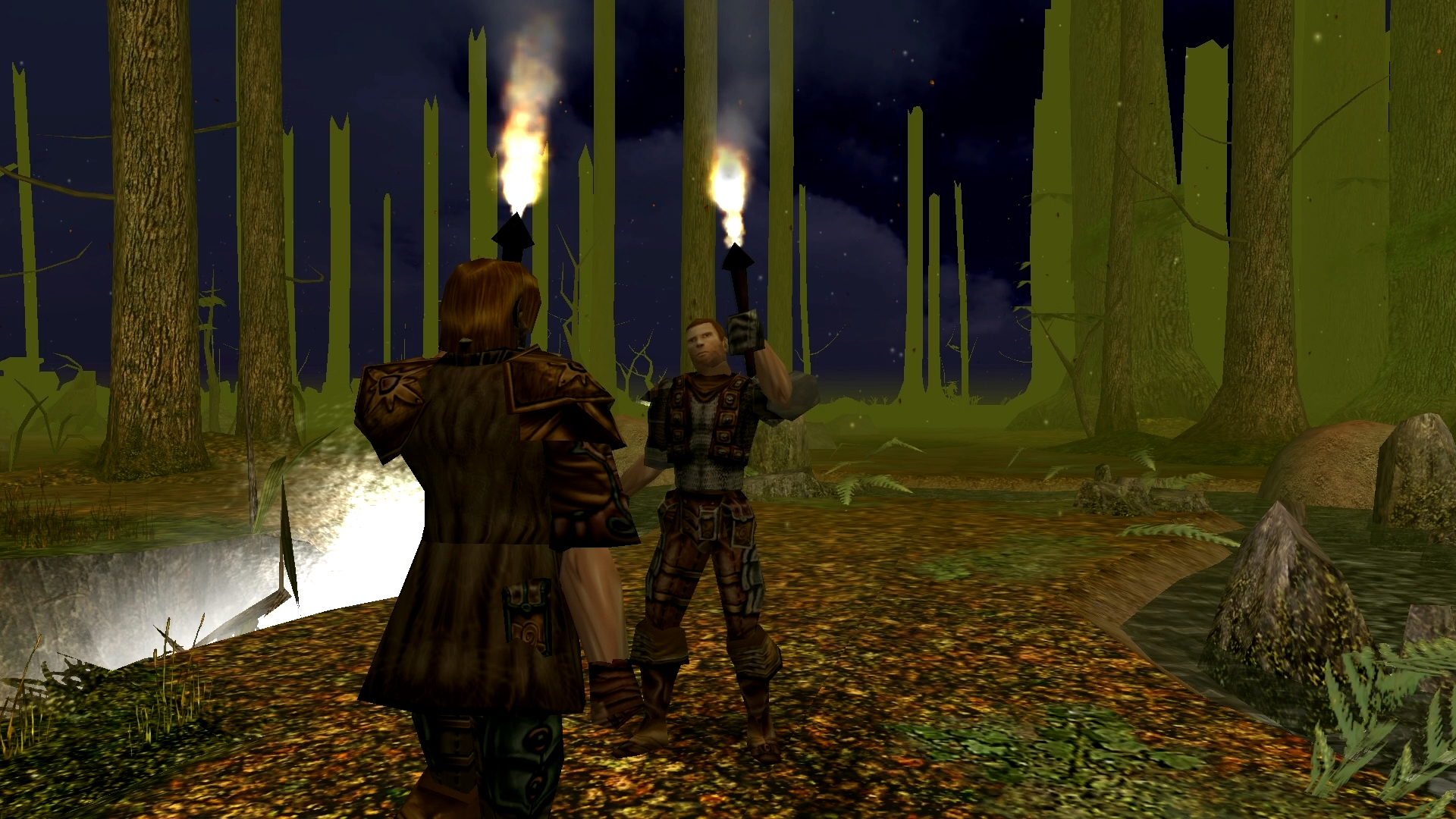 EPISODE 04: A WALK IN THE WOODS – Following the map from Pawl the Dorf’s “cousin” proves to be a bad idea, as Peter and Grayson soon find themselves lost in the woods, following Peter’s directions… 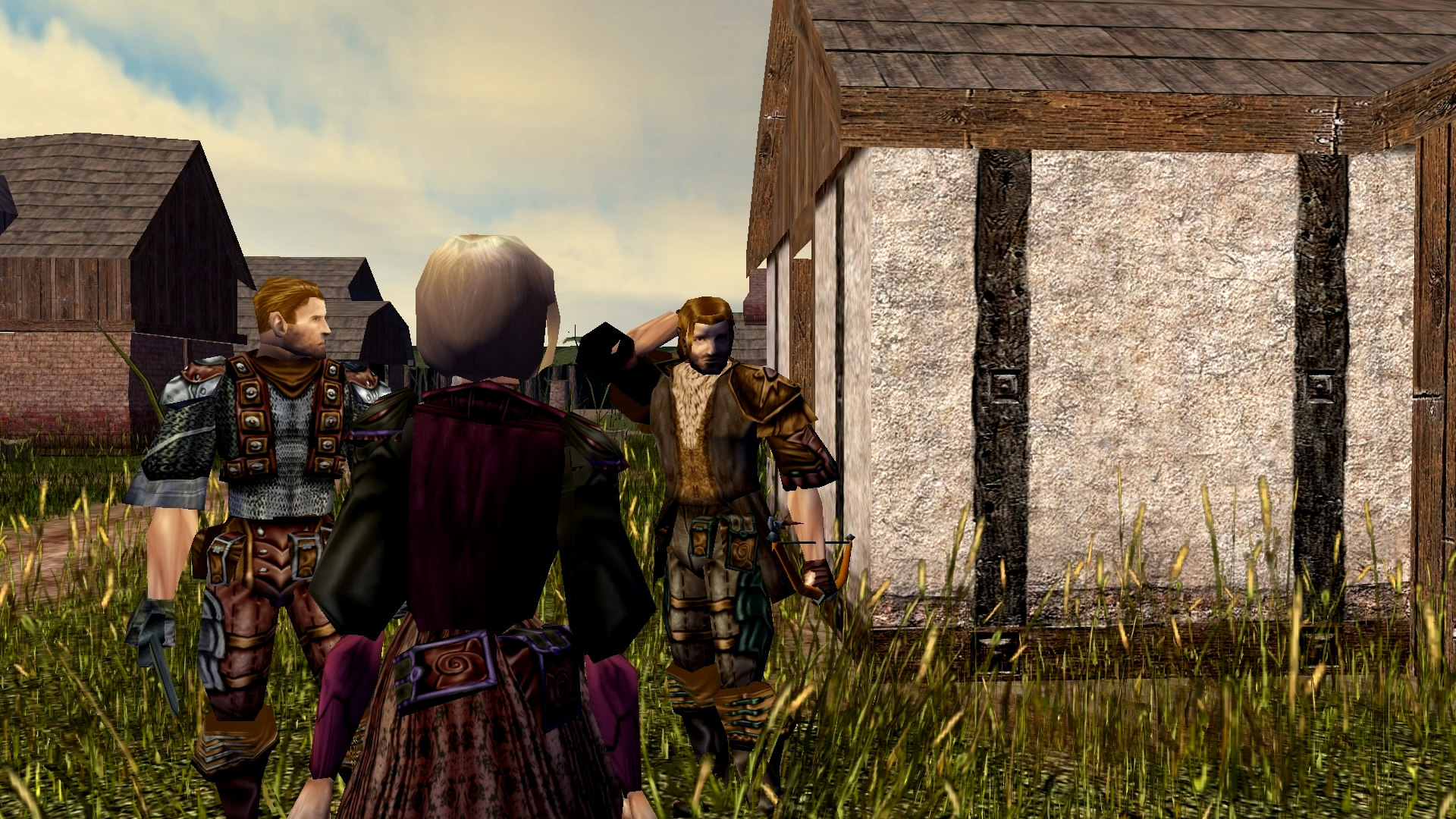 EPISODE 05: YE SALTY DOG – Peter and Grayson manage to find their way out of the woods, and enter the city of Galana, which Grayson recognizes and shares a story about a broken-hearted woman he met in Galana. Here, they also meet Poppy the Salt Vendor, who sells them bags of salt. Because everyone needs salt, right? 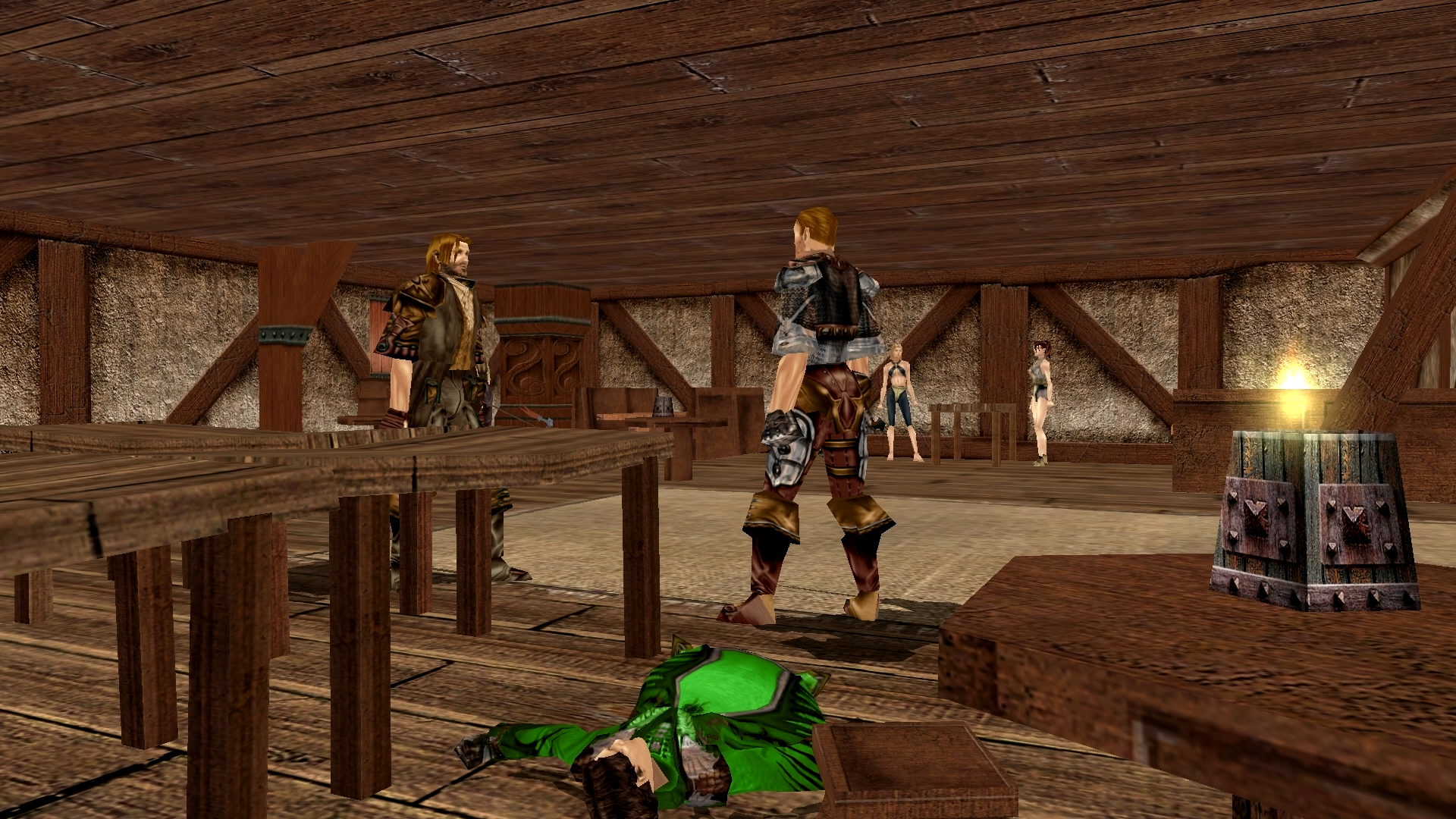 EPISODE 06: HE’S A MAGIC MAN – Inside the tavern of Galana, Peter and Grayson spot a Wizard named Alan (“The Astounding!”) and approach him to ask how Wizards make so much money doing Magic Tricks… 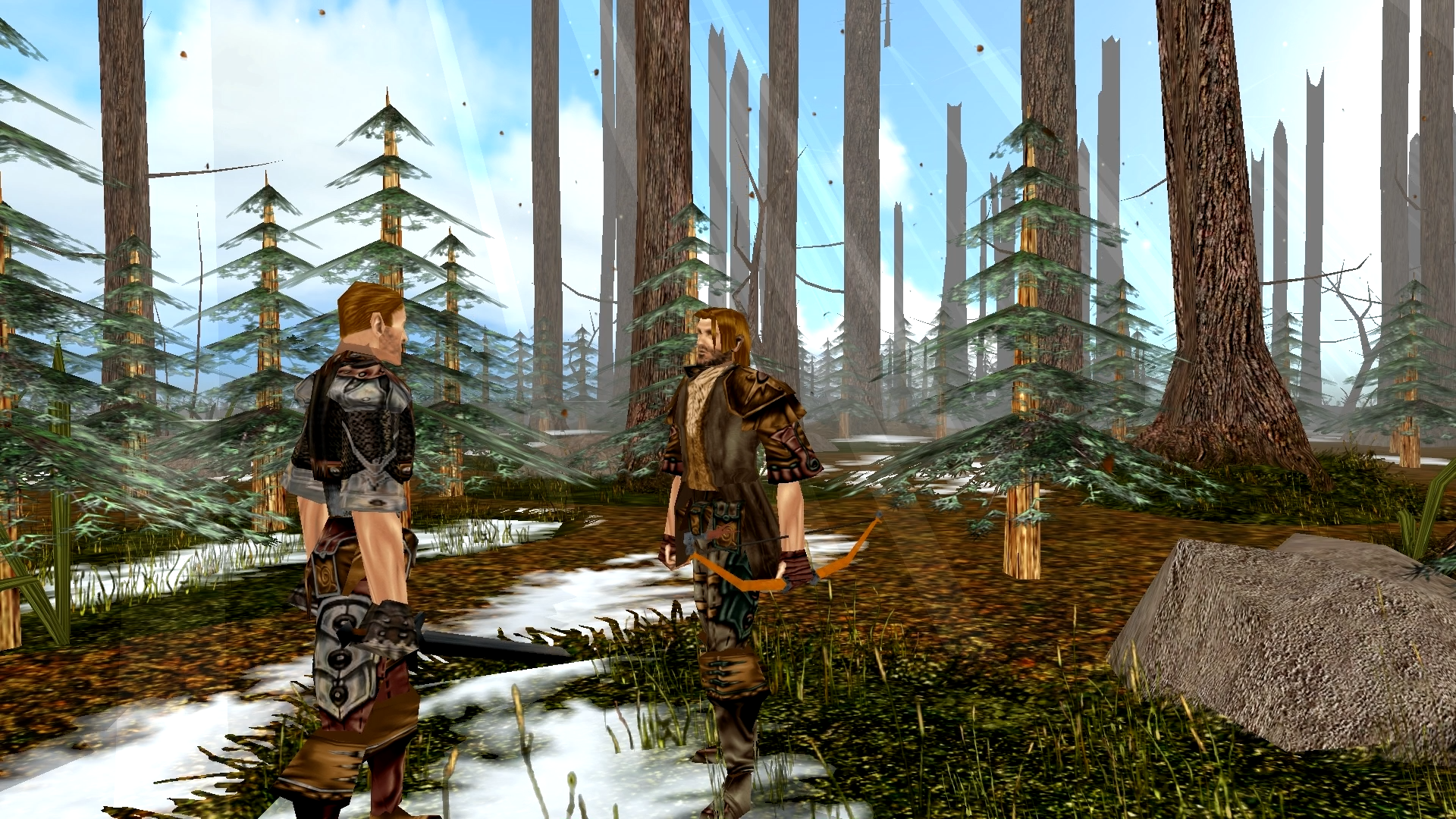 EPISODE 07: THINGS THAT MAKE YOU GO… BOOM? – Peter and Grayson leave the town of Galana and continue their quest to become heroes – they go from a forested area to a frozen tundra – and Peter begins explaining the dangers of falling snow – because that’s when… The Ice Cube Monsters come out…! 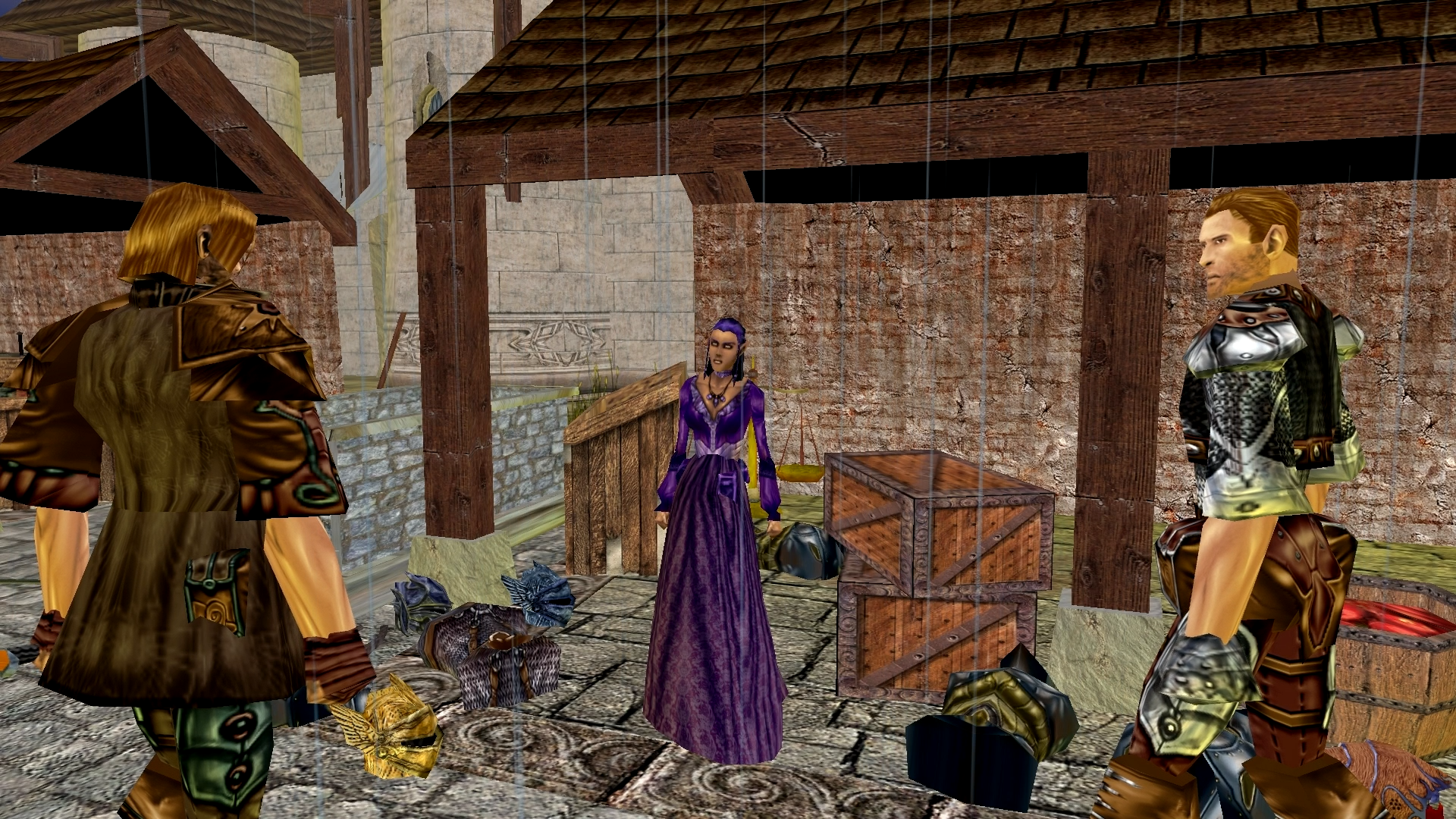 EPISODE 08: ON BORROWED GOLD – In this episode, Peter and Grayson stumble into Stonefrost City and meet with Amiee the Armorer who makes a deal with them and may just have some armor for these two would-be heroes to purchase!

NOTE: This episode was one of the episodes that had audio issues when it was originally recorded. I tried to correct it as much as possible, but it’s still, unfortunately, noticeable. 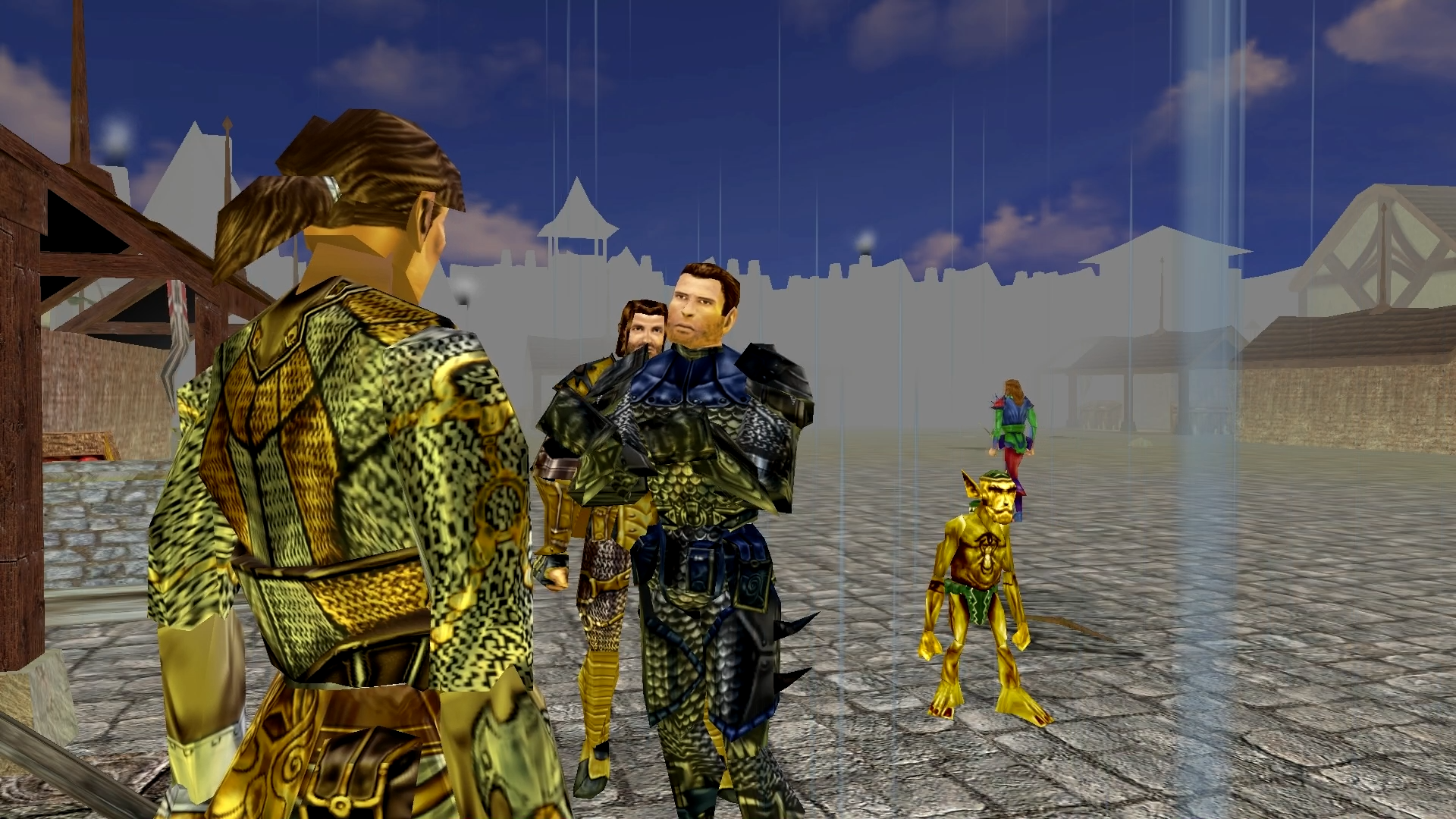 EPISODE 09: IT’S NOT THE SIZE THAT MATTERS…: Peter and Grayson have just gotten some armor to look a little more “flashy” and a little more hero-like. Now all they need is some weapons! Grayson needs to replace his rusty sword, which was lost in the epic battle with the Ice Cube Monster, and Peter needs some real arrows, rather than those Velcro tipped arrows he’s been using (although, it did just save their lives against said Ice Cube Monster!) In Stonefrost City, there’s bound to be a weapon vendor somewhere, right? And they do find him – he just happens to be a little… creepy. At the very end of this episode – guess who they run into? Watch and see. 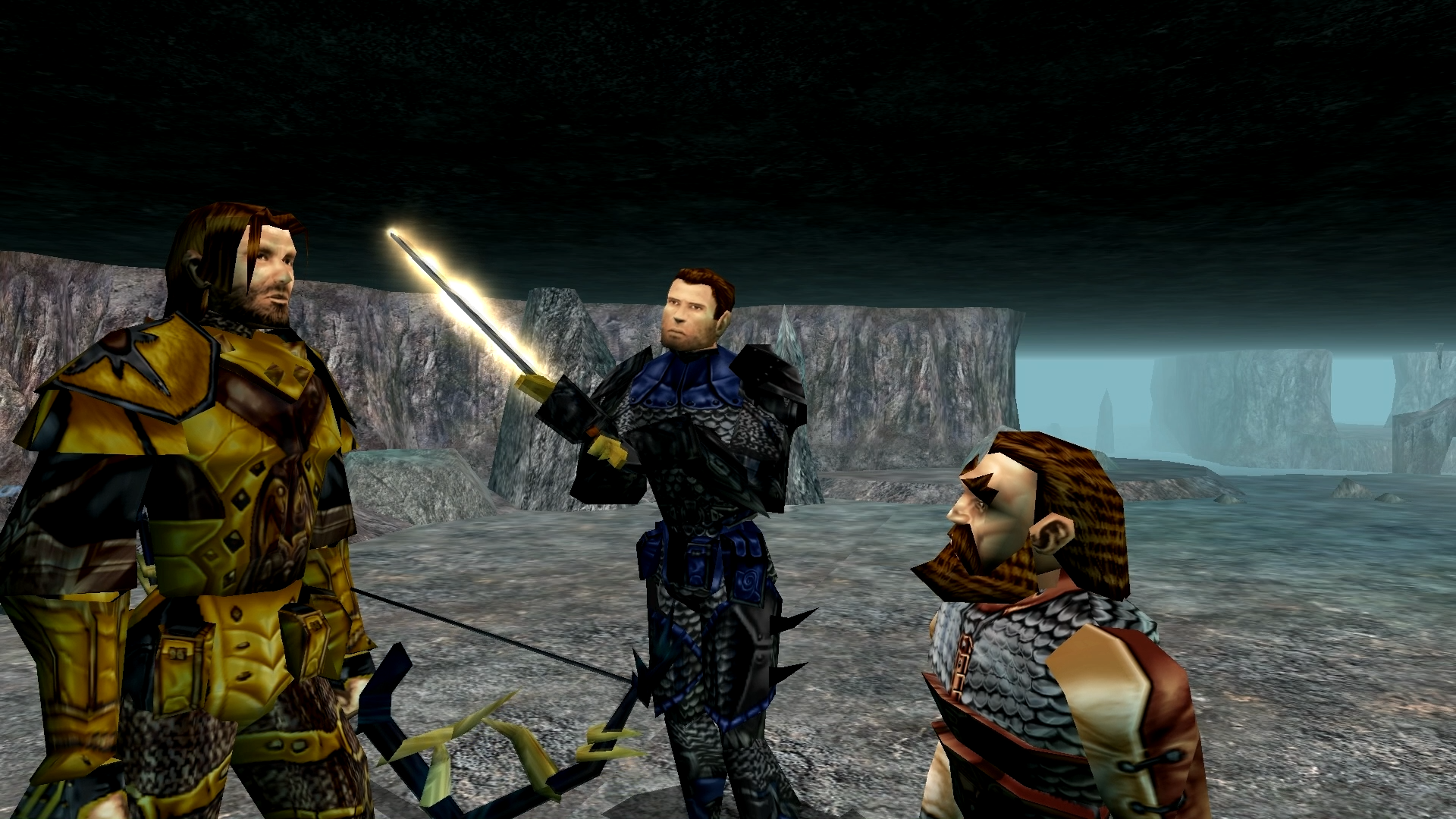 EPISODE 10: RACIAL BENEFITS: Having left Stonefrost City, after acquiring some new armor and weapons, Peter follow the map into the frozen tundra where they encounter, none other than their good friend Pawl the Dorf. Standing outside of a cave, Pawl the Dorf pleads with our would be heroes, to go with him and help him explore the cave. Once inside, the unlikely trio encounter something – and debate just what it is! What is it they find? Well, click one of the links below and watch the episode! 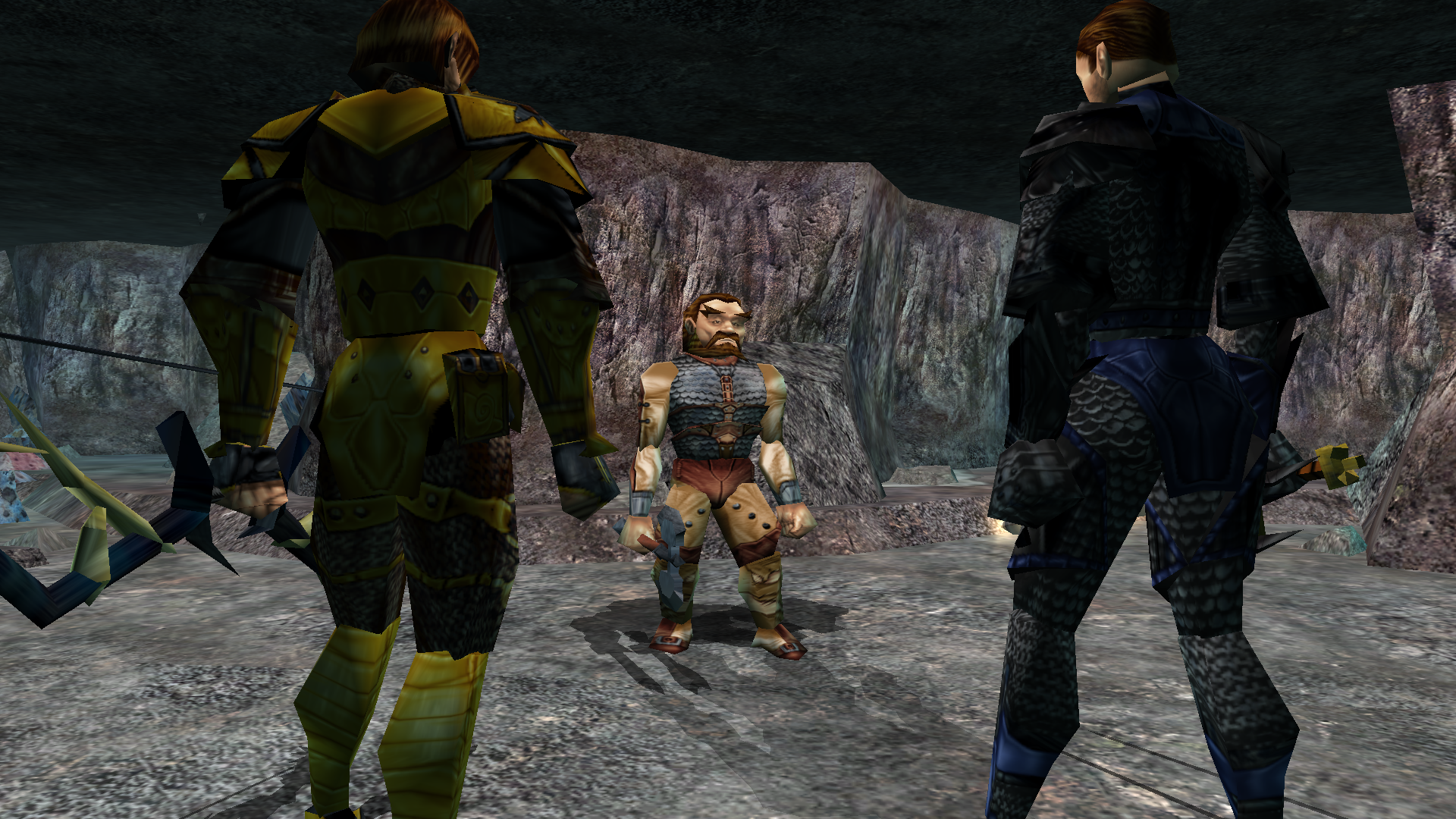 EPISODE 11: DEEP, DARK, REVENGE: Lost in the Goblin Caves of Stonefrost, our unlikely trio of would-be heroes, Peter, Grayson and Pawl try to find their way out of the caves without Pawl’s map. Meanwhile, that very same map of the caves, has fallen into the hands of three unlikely goblins – Charlie, Albert and Bob – who have found that Dink (who was supposed to be guarding the bridge from bugbears – trolls! – has passed out from dancing too much!) Now, the three goblins are trying to track the ones who have danced with Dink and see if they pose any danger to the rest of the Goblin community… 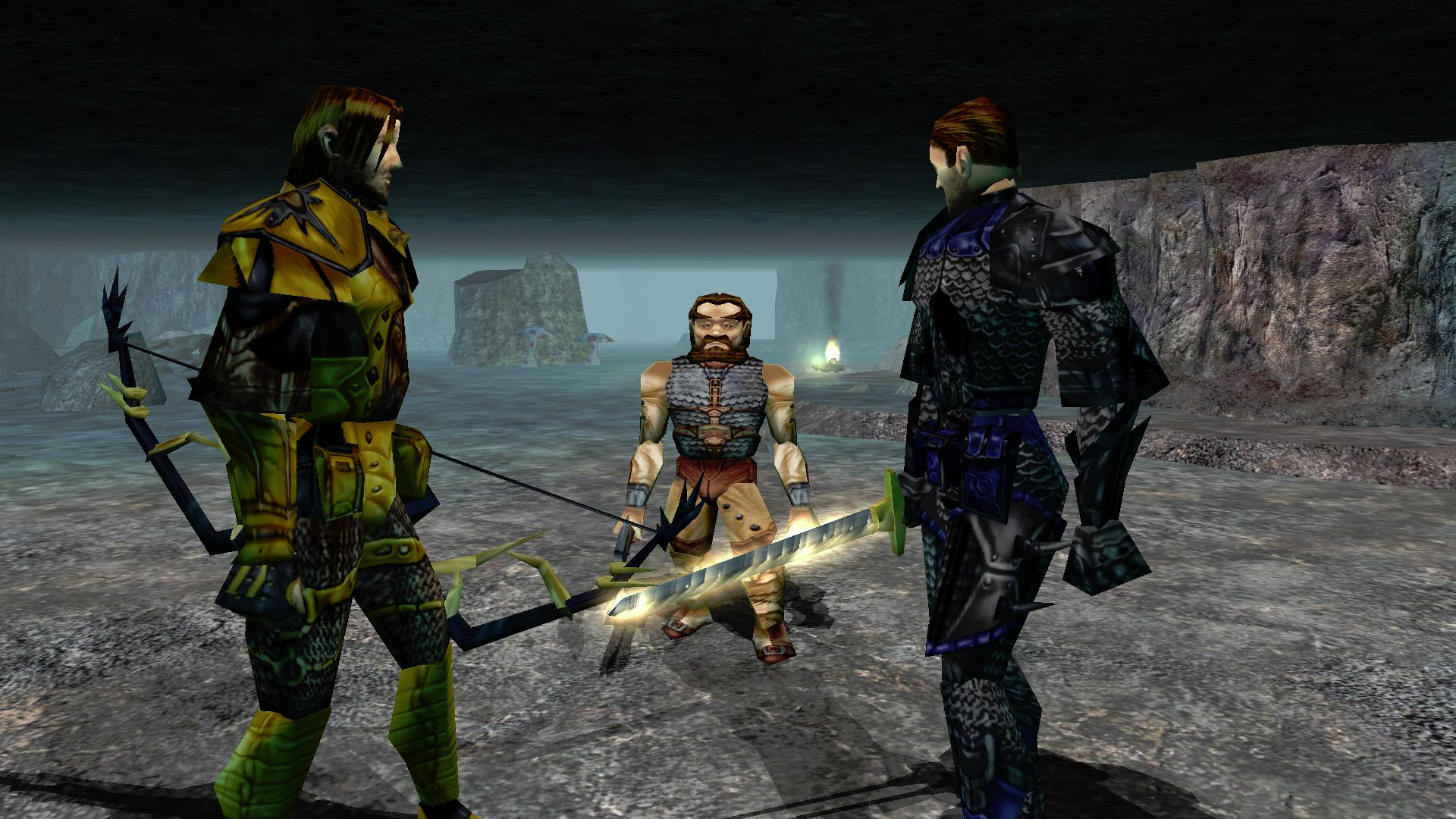 EPISODE 12: WHERE THERE’S SMOKE…: Peter, Grayson and Pawl – still lost within the Stonefrost Caves, begin discussing what their next move should be. During the debate, Pawl the Dorf mentions that they should make a campfire – and rest for the night – and resume their attempts to get out of the caves tomorrow. This sparks (no pun intended!) a discussion about the dangers of such an idea (starting a campfire in a cave!) to the wonderful idea of toasting marshmallows! What could possibly go wrong, right? With this trio… just about anything! 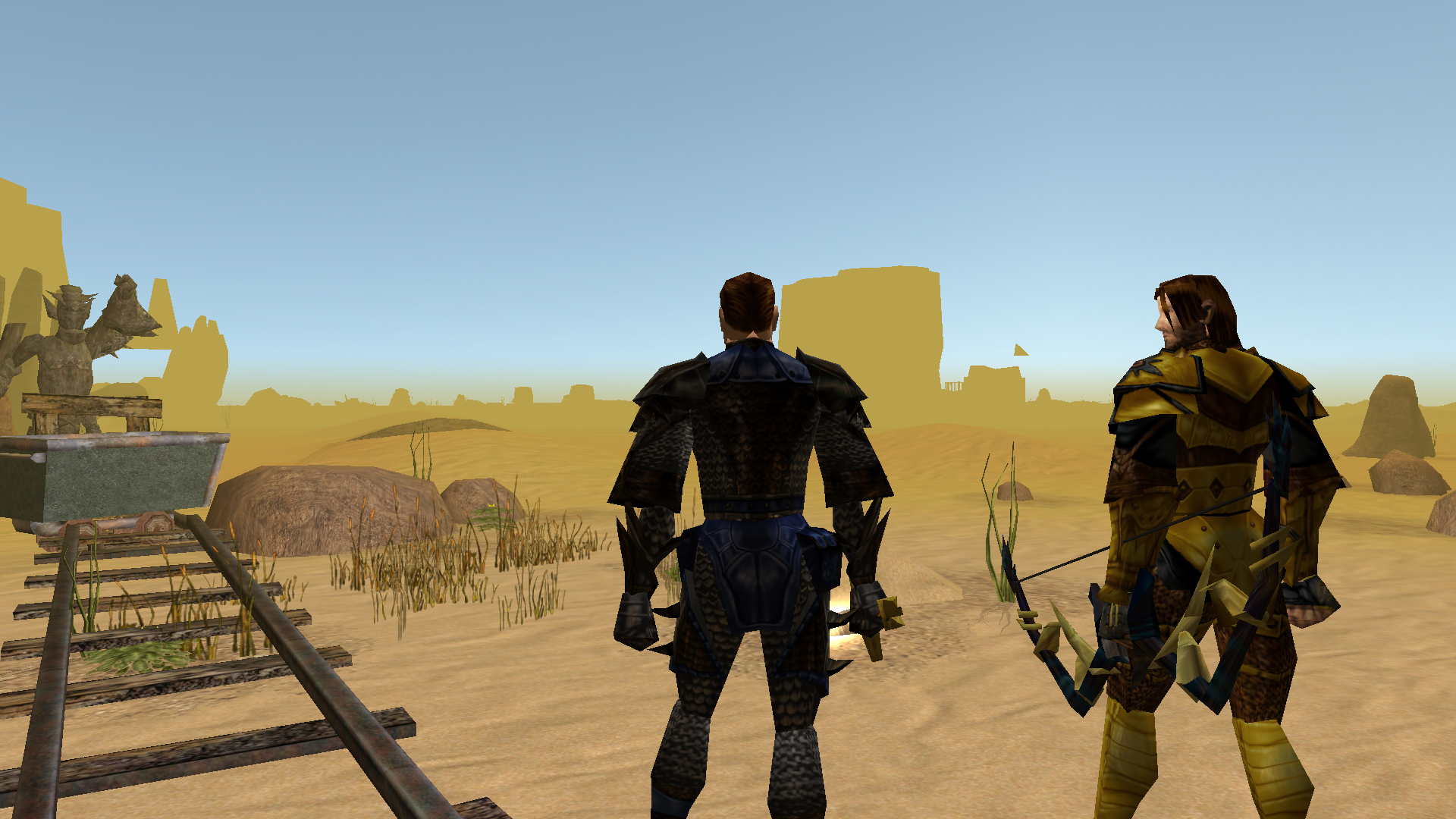 EPISODE 13: IN & OUT, A HERO’S TALE: Peter and Grayson wake up from being rendered unconscious from the smoke in the cave… And wake up, to find that their good friend Pawl the Dorf still hasn’t returned! Peter and Grayson go and fetch some water, where Peter begins to “talk to the fish” – but stranger than that – a mysterious voice begins to speak directly to Grayson’s mind! As Grayson struggles to determine where the voice is coming from, Peter and Grayson decided that they need to seriously find their way out and resume this “hero business.” Will Peter and Grayson find their way out? Will they find their good friend Pawl the Dorf? This episodes answers those two questions, but begins the story of the voice in Grayson’s head… The mystery begins! 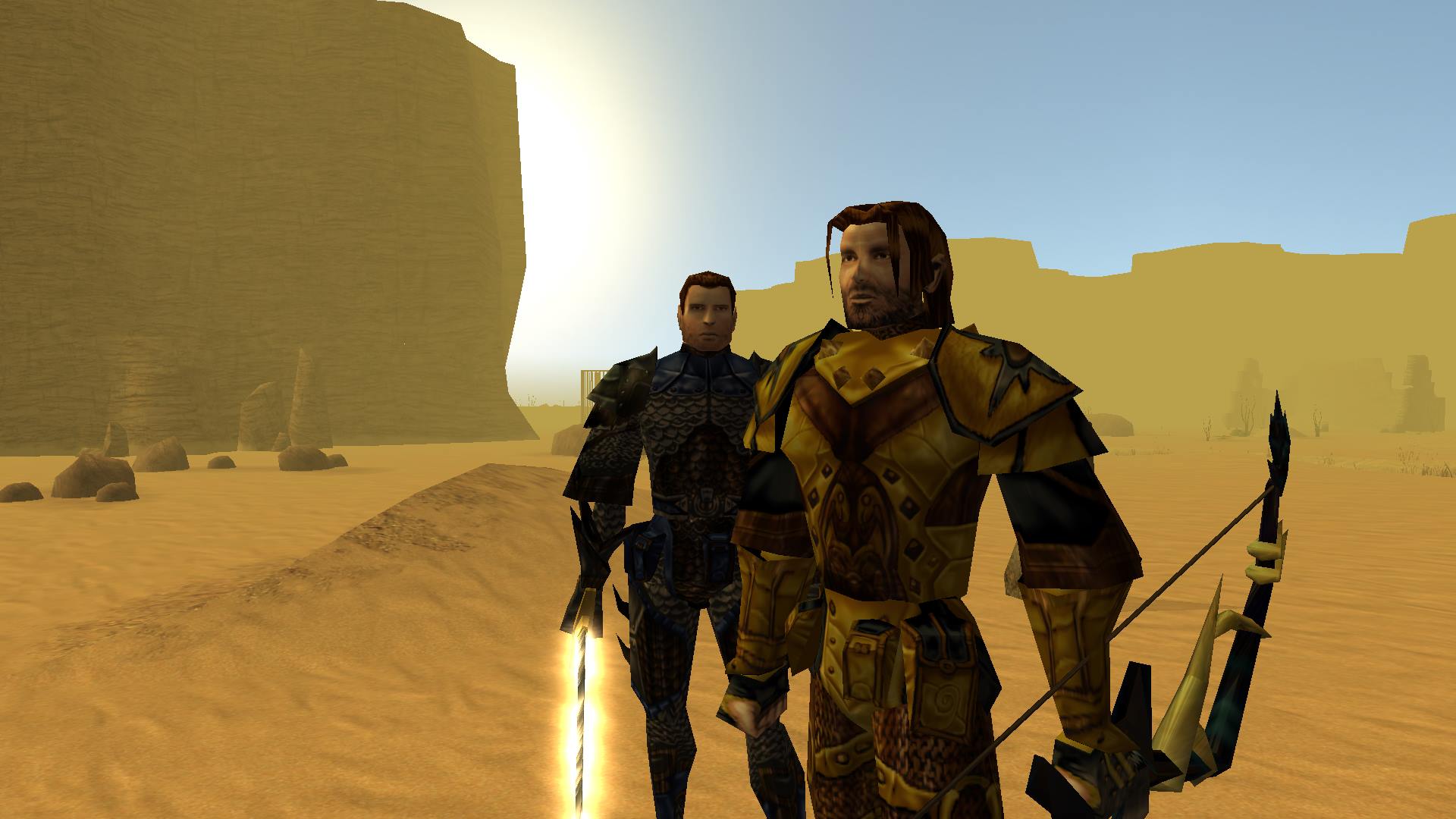 EPISODE 14: HERE COMES THE SAND AGAIN: Peter and Grayson are still lost in the endless dunes of the Arreis Desert. Peter’s pretty confident that they can find the City of Ator (better known, in Peter’s mind, as the “Dessert Village”). However, as the hours pass, and our heroes are without rations, the dehydration begins to take effect, and Grayson – aside from hearing that voice in his head again – begins to hallucinate and begins “drinking” sand… Only Peter’s quick wit (or lack of understanding the Common Tongue) saves Grayson. We also see a little more of Pawl the Dorf as he wanders those deep, dark, halls within the cave… Will he find his way out? 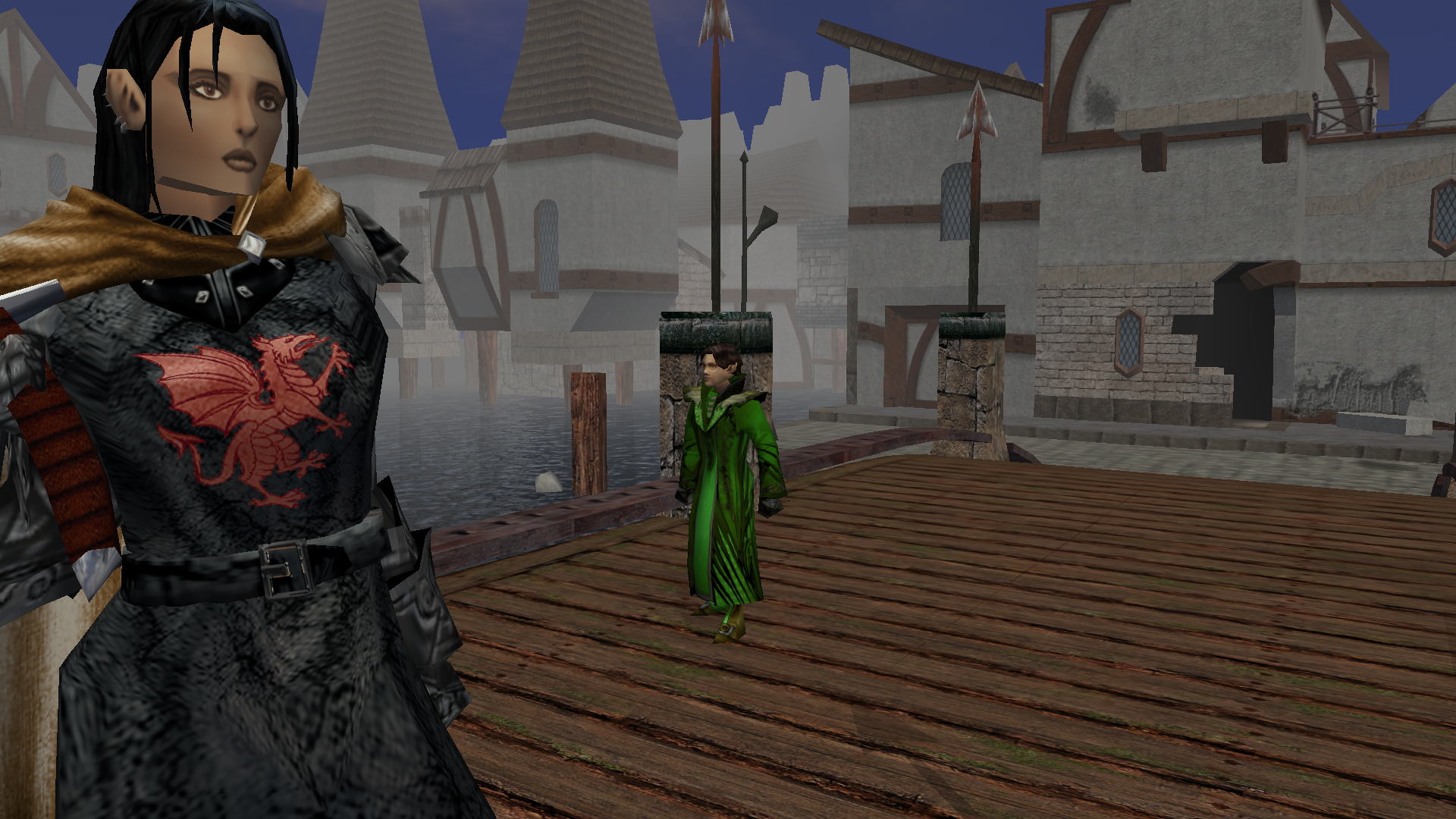 EPISODE 15: REACH OUT WITH YOUR FEELINGS: As if matters simply couldn’t get worse for Peter and Grayson – well, it does! As it turns out, those wonderful Marshmellows that Peter was hoping to roast over an open fire have gained sentient life after the gunk from the Ice Cube Monster explosion got mixed with it. But, fear not – because Peter the Ranger has just come up with a new plan to help them out of this mess! He’s going to use his Ranger Skills and summon… An Animal Companion. What could go wrong? 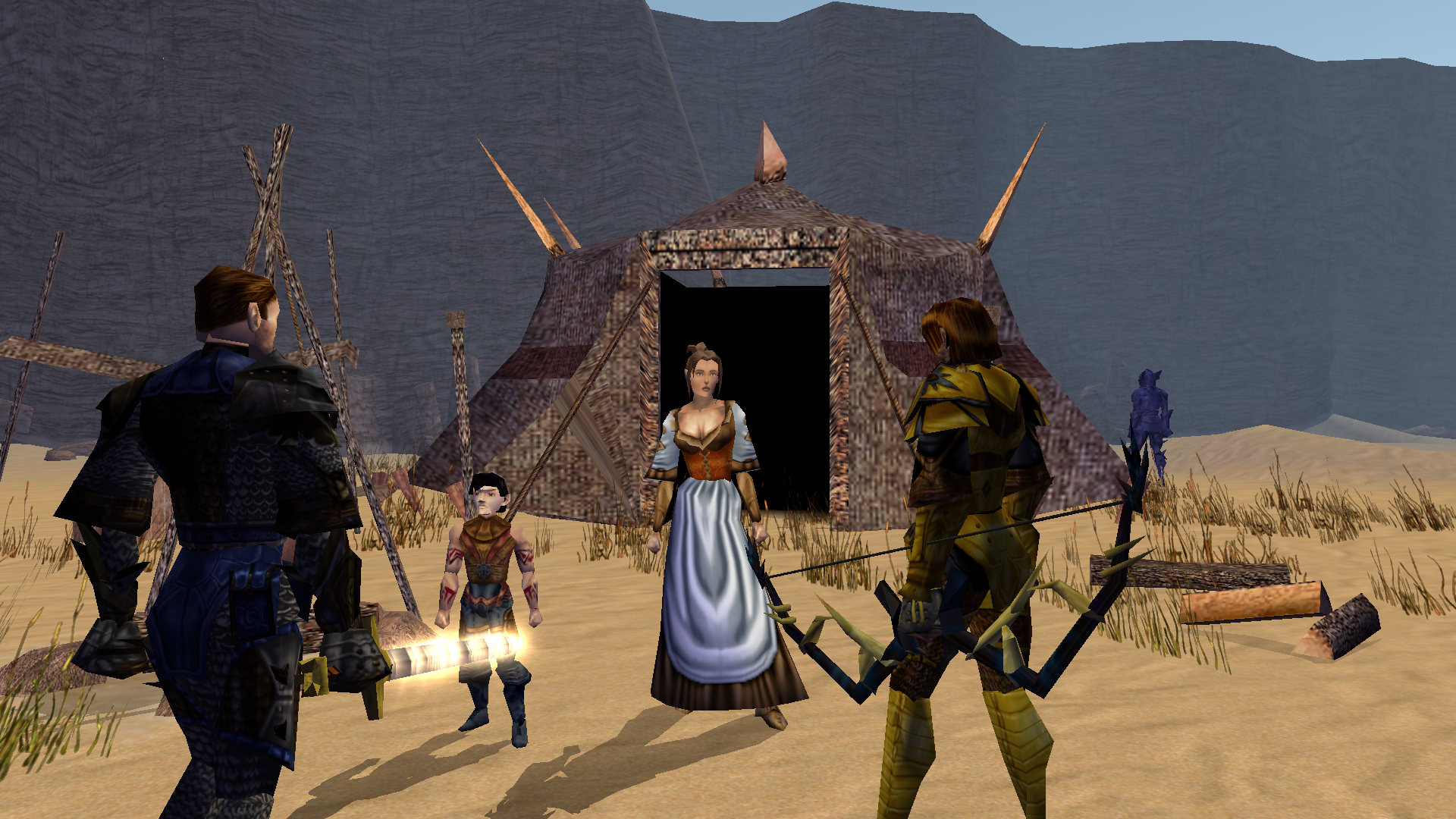 EPISODE 16: “DESSERT” CITY: Surly Peter and Grayson’s luck has to take a turn for the better, right? Well, finally – in this episode – it does, indeed, take a turn for the better! Finally, Peter and Grayson come across what Peter has affectionately called “The Dessert City” – which, the citizens of the city, simply refer to as the City of Ator. This episode introduces four new characters (two guards) and two merchants! The guards give Peter and Grayson some advice, while the merchant’s son gives Grayson some lip about their heroic deeds! This episodes also swings back around to Pawl the Dorf and where he’s at in all of this! 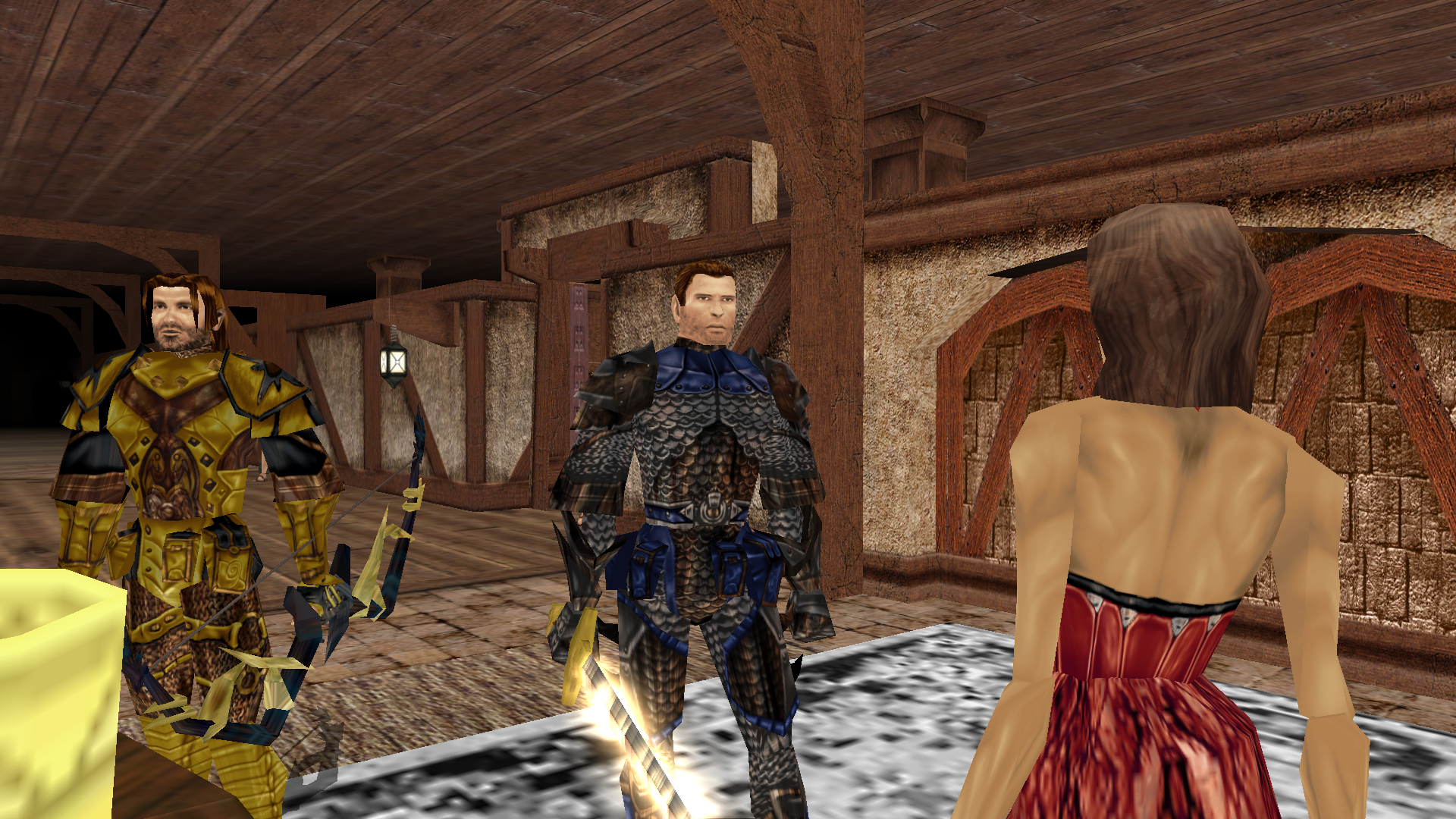 EPISODE 17: HEROES BAR & KEEP: Peter and Grayson make their way to the Heroes Bar & Keep – and learn there’s more to it. Apparently this bar also provides a form of… entertainment of some kind. Feeling confident (and perhaps grateful) to be at a real bar (a scene that both Peter and Grayson are wholly familiar with), Peter and Grayson order up some drinks – and Grayson even orders up some of this “legendary” entertainment that the bartender speaks of. This issue also brings in, Andrea the Assassin, who we previously glimpsed at the docks when Alan the Astounding passed out! So we see her – and how does she tie into the lives of our would be heroes? She could spell some serious trouble… 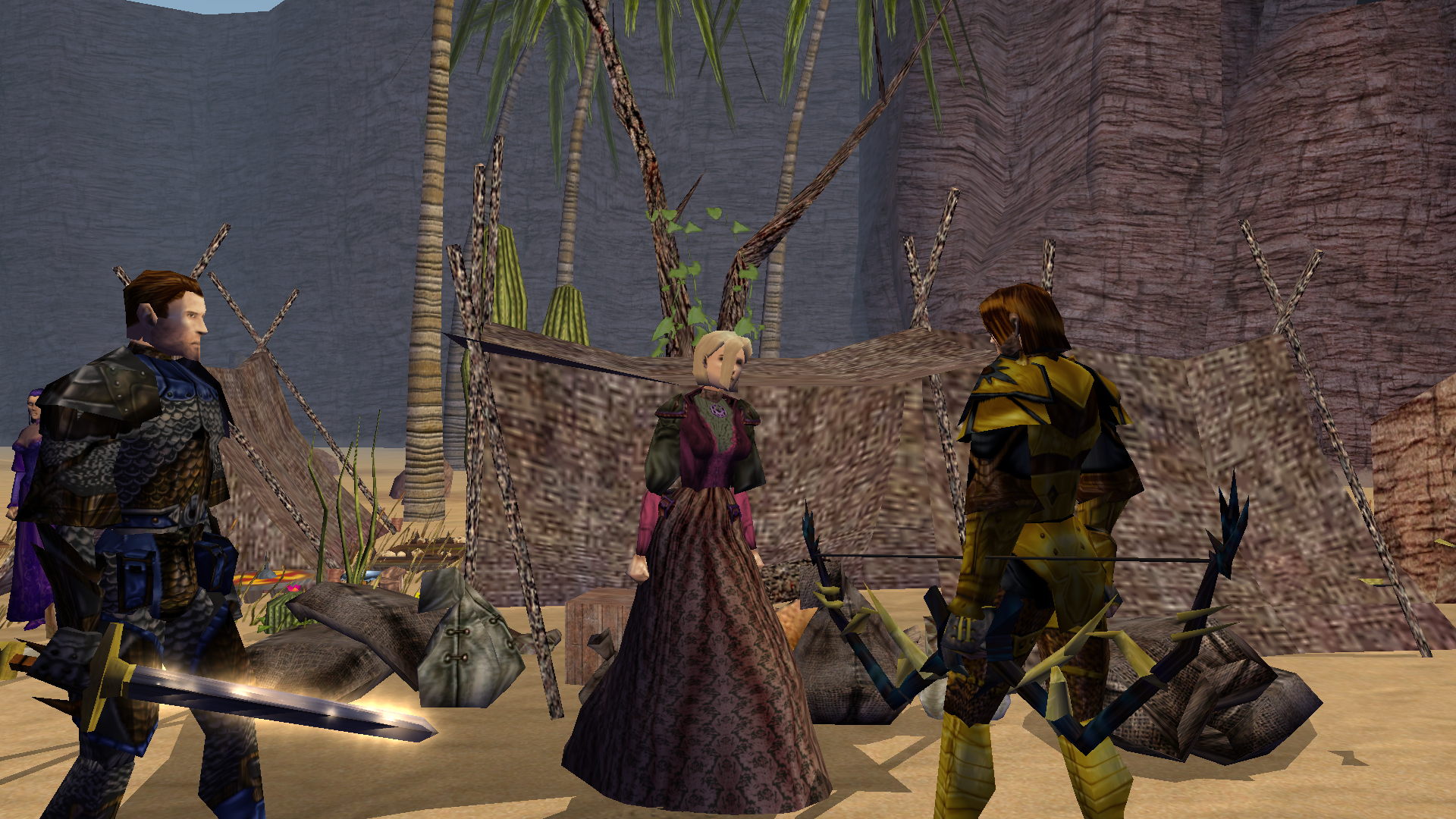 EPISODE 18: PEPPER FLAVORED: Peter and Grayson leave the Hero’s Bar & Keep (And Brothel) in the City of Ator and roam around, until the hear an all too familiar sound of a very special vendor. Out of salt (having used it on the Ice Cube Monster), Peter and Grayson make their way to see Poppy the Salt Vendor who happens to be in the City of Ator. While talking to Poppy the Salt Vendor, our two heroes learn that they’re much closer to finishing their quest than either of them dared hope! What do I mean? Watch the episode and see! And if you enjoyed it, please share the video far and wide! 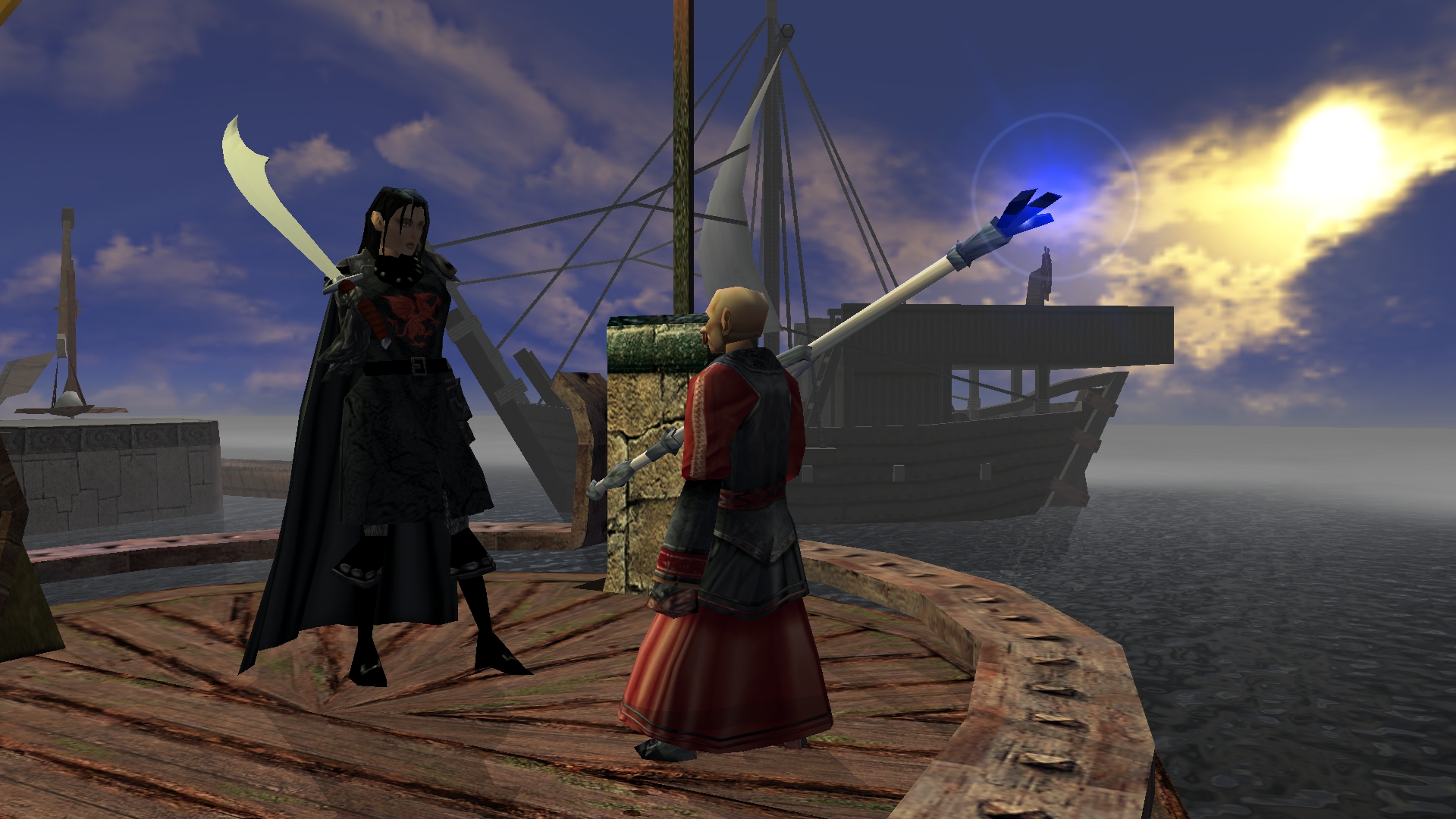 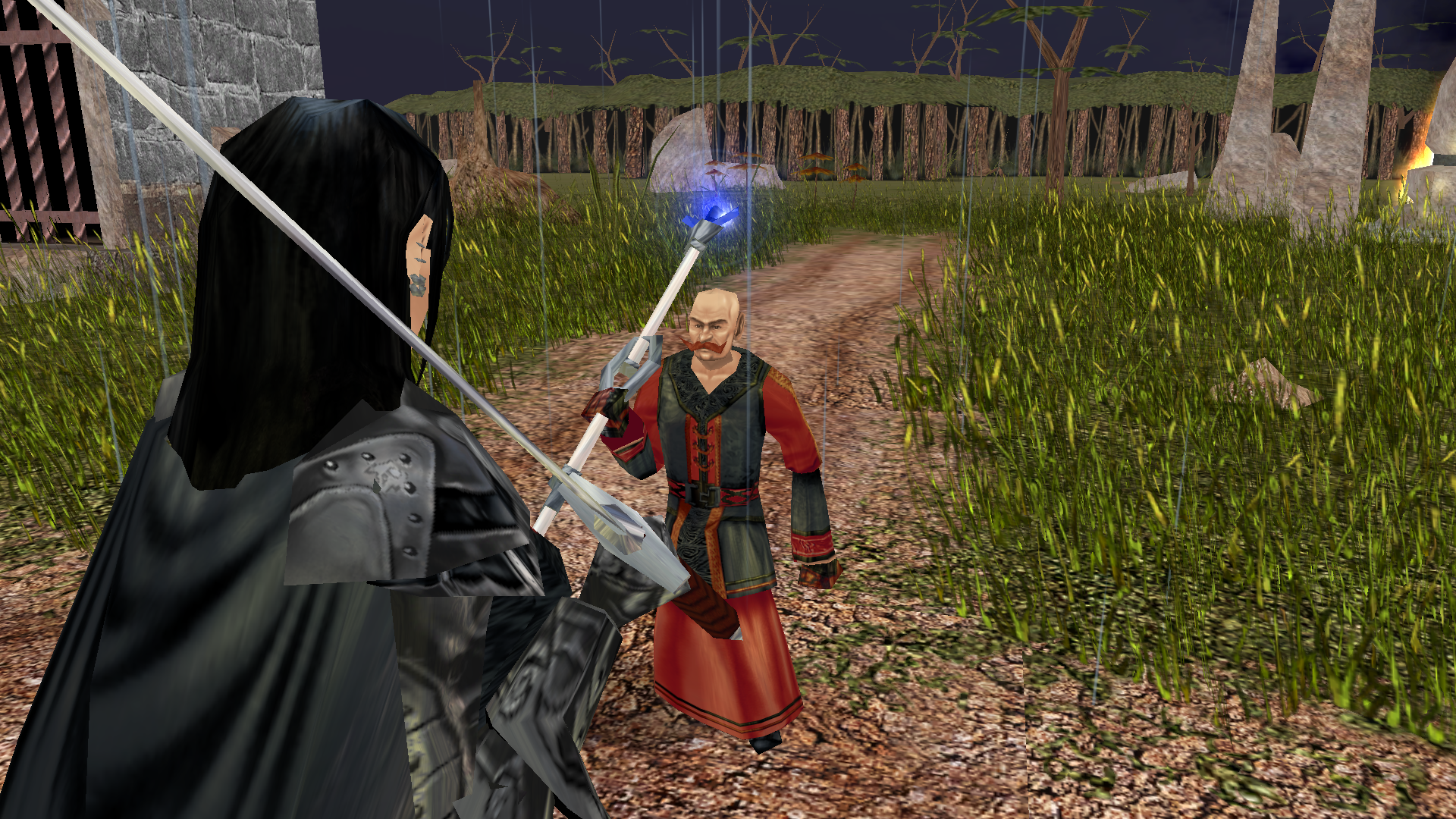 EPISODE 20: VARIETY IS THE SPICE OF LIFE… AND DEATH: This episode, Grayson begins to doubt his own heroic abilities, and Peter seems to grow increasingly more confident about confronting the Dragon that lives within the caves just behind the City of Ator. The episode also follows Andrea the Assassin and Daniel the Destructive, as they continue to track down both Peter and Grayson; taking a short cut to the fabled Plains of Desolation. And finally, we return to see where Pawl the Dorf is at in those goblin caves… having been wandering around so long… he’s actually gone much deeper than he ever expected… but that should be fine, because lo’ and behold, he finds other Dwarves. What could go wrong? 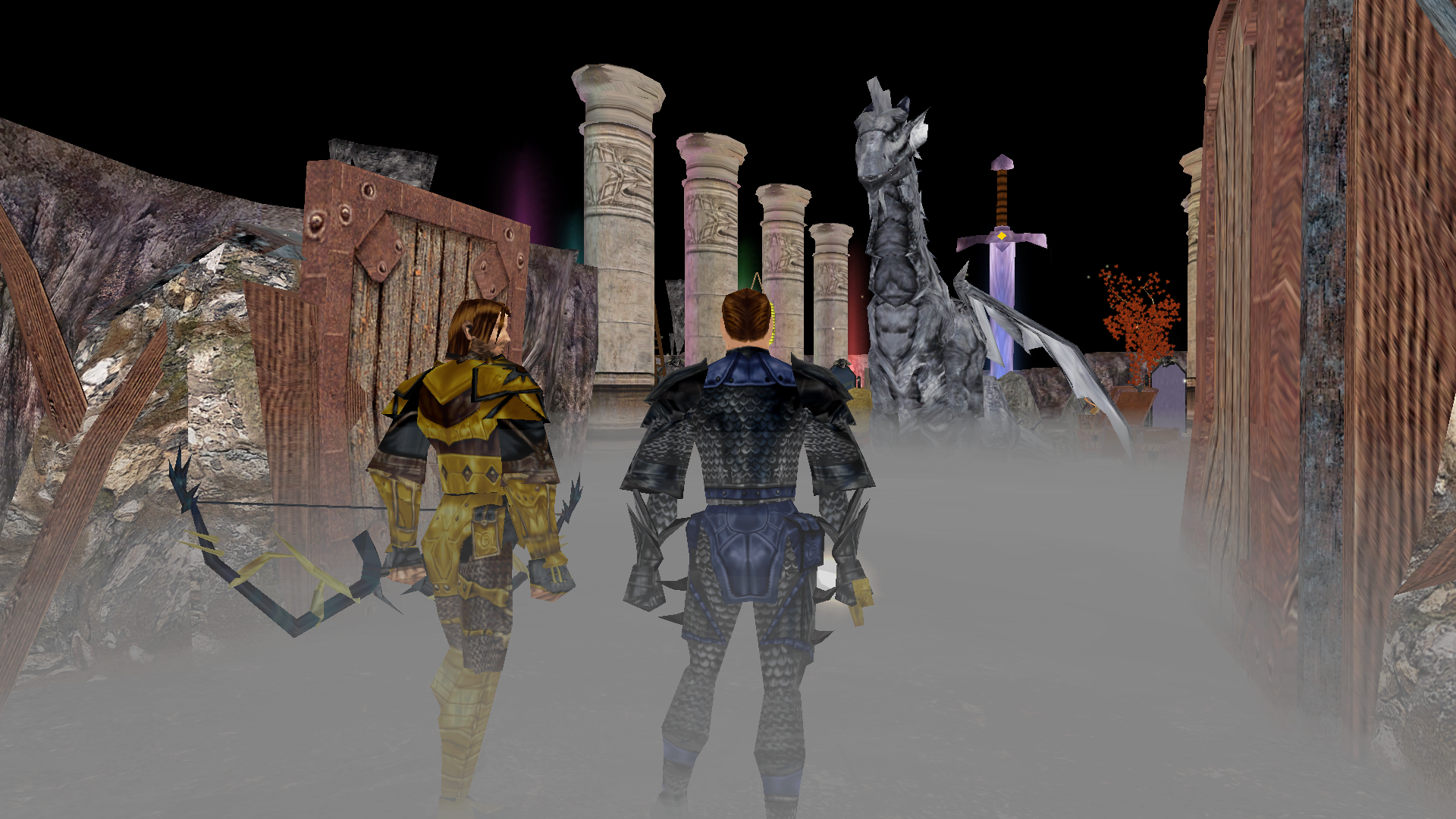 EPISODE 21: ACCUMULATION: Peter and Grayson finally build up the courage to face the Dragon of Ator! But not before they decide they need to solidify their courage with a little bit of Liquid Courage… However, when Peter and Grayson arrive – they take notice to the two heroes in the Yellow and Blue armor that they saw back at the City of Neverending – and ponder if these two heroes are here to kill the dragon that they’re going to slay, to become rich and famous! Things unfold quickly, and we get to see several other characters – including the fate of Pawl the Dorf after meeting his mysterious (and extremely violent) “Mountain Cousins.”