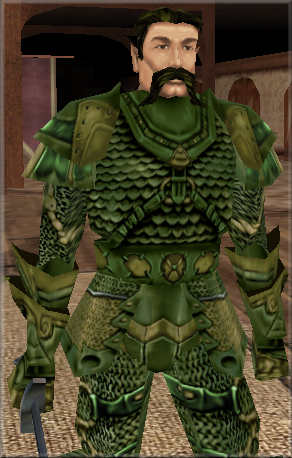 Race: Human
Occupation: Bar Tender
Place of Birth: Scara Coast
Known Relatives: Mother (Unknown), Father (Unknown), Diane the Drinker (Wife), Reade the Rocker (Son), Remy the Rambunctious (Son)
First Appearance: Never actually appeared; appeared only as a mention in the final episode credits of the original release
History: Rudy the Ravishing (called so, for his stylish mustache) hails from Scara Coast (which connects to the often violent and haunted, Scara Sea Oceans). Desperate to leave the small island and find out what the world was like, Rudy the Ravishing took a chance and sailed across the Scara Sea Oceans and made landfall on the main land. He traveled between cities for quite some time, before he realized, while sitting at a bar – that bartenders meet some of the most interesting people and hear some of the most interesting stories. Applying as a bartender, there was none who could deny the Ravishing factor Rudy exuded, so he was hired. There he met a beautiful redheaded woman named Diane, who found herself falling in love with Rudy each and every day. So she frequently made her way to the bar (and even though she sipped one drink all night, she got the reputation of being a drinker). Rudy and Diane soon officially began dating, and soon after, both confessed their love for one another. Together they have had two sons, Reade and Remy.