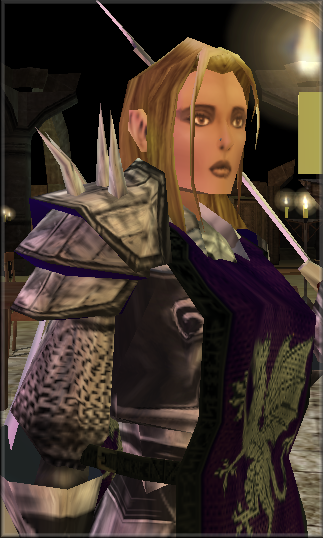 Race: Human
Occupation: Former Waitress, Assassin
Place of Birth: Galana
Known Relatives: “Evil Queen” (“adoptive” mother), Father (Unknown Name)
First Appearance: Neverending Nights – Episode 17: Heroes Bar & Keep
History: As Andrea the Assassin, there was very little known about her origin. It wasn’t revealed until much later, that she was actually known previously as Ruth before being recruited by the Crimson Draco and her army.

As Ruth, she had worked as a waitress in the city of Galana, where she first met Grayson. She was immediately enchanted by his tales of bravery and heroics (all of which was made up to impress her, because he had been drawn to her as well). Though Grayson was not from Galana himself, he had made the trip there several times, simply to see Ruth, each time returning with more grand (and fabricated) tales of heroics. One day, she brought out a dessert for Grayson, on the house, to thank him for all the heroics. She then sat with him and said she had wanted to run away with him and be with him and witness all these great things he did in the world.

That was the last meal Ruth ever severed Grayson, and the last time she ever saw him again.

For a very long time.

She had no idea what she had done to drive Grayson away (in truth, he was scared of revealing that he wasn’t the great hero he had painted himself to be, so he avoided Galana at all costs). Ruth, being broken hearted, was easily swayed by the Crimson Draco who found Ruth crying. She sensed great potential within Ruth, and great sense of revenge. The Crimson Draco took that and fed upon it and recruited Ruth. She changed Ruth’s appearance to be more sinister looking and changed her name to Andrea the Assassin.

She quickly rose in the ranks of the Crimson Draco army and was hand picked by the Crimson Draco herself to seek out “The Blade of Destiny” – a sword forged specifically to slay dragons. She followed a series of leads that eventually led her to the city of Stronefrost where she met Ronald the Wreckless, who had just sold the very sword she sought to two “would be heroes” (Peter and Grayson, though she did not know it was the same Grayson she knew). She struck down Ronald the Wreckless, as well as his guard, for good measure, and left them both dying on the frozen floor.

By order of the Crimson Draco, she met a gnome by the name of Daniel the Destructive, who was to assist her in tracking down the magical blade. Though she and Daniel did not get along (more so, she did not get along with him, due to his constant rambling), they did manage to finally track down Peter and Grayson and catch up with them. This is where she learned that the one who had the sword was none other than Grayson – the same man she had fallen in love with in Galana. She found that she could not strike down Grayson and take the sword. She had told Daniel to teleport herself and Daniel back to the Crimson Draco and report that they could not find the blade. However, due to Peter having Pepper Flavored Salt, which has been known to impact spells – it was actually Peter and Grayson (along with Pawl and Dean the Silver Dragon) that were teleported before the Crimson Draco.

She would eventually make her way back to the Crimson Draco camp and discover that the Crimson Draco had been slain by Grayson. She could not believe it – Grayson had done a heroic feat – but not only that, she now had no one to turn to. Dean the Dragon appeared before her and explained that her soul was not yet lost – that she could make a difference. Peter and Grayson had been imprisoned by the Crimson Draco Guards until they figured out what to do now that their leader had been struck down. Andrea took up her original name, Ruth just as Dean the Dragon said she could redeem herself – she now called herself Ruth the Redeemed. She immediately went to the prison level and discovered, somehow, Peter and Grayson had escaped – but they had (unknowingly) left Pawl the Dorf behind. She freed Pawl and together they sought to catch up with Peter and Grayson. When they finally did, Pawl learned how to reforge the Blade of Destiny (which had lost its charge after killing the Crimson Draco). Now they fought hordes of armies under the command of the Dragon of Silverlake – who, they discovered – was an undead Dragon! Peter and Grayson had successfully killed the Dragon and opened the tavern they had always hoped. Ruth the Redeemed and Grayson the Fighter talked and cleared things up, realizing both of them had changed, and that their paths now went separate ways. Grayson remained as the owner of the new bar, while Ruth went on to help others against the other Dragon armies of the world.

SWORD: Ruth wields a sword – it is unknown whether it is magical or not, though she’s made it very clear she knows how to use it well.