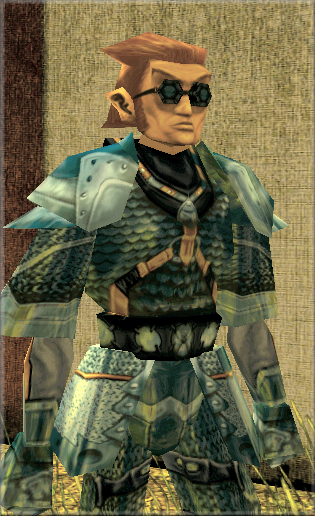 Race: Human
Occupation: Thief, Journeyman in Training
Place of Birth: Stonewall
Known Relatives: Mother (Unknown Name), Father (Unknown Name)
First Appearance: Neverending Nights – Sixty: But I’m A Lover, Not A Fighter
History: David the Delinquent was only an infant when his parents, both of them adventurers, had gone in search of the fabled Dragon Ball, which would allow the owners to control dragons. With his parents slain, David grew up on the streets, feeling as if he was born to emptiness. He survived by stealing out of necessity, for this was how he survived. One day, he had tried to steal from a man who had come to Stonewall – the man’s magical, green sword, had caught David’s attention. The man was none other than John the Journeyman, a renowned fighter known far and wide. John the Journeyman captured David just as he was trying to steal his pouch, but rather than turn David over to the authorities, he offered the choice of training David to become something better, something more.

David trained under John the Journeyman, spending many days and nights, doing meager tasks – which he often grew frustrated with. But John the Journeyman always told him, that everything happens for a reason – and doing meager tasks will allow David to hone his skills, if he concentrated on the task at hand, not whether it was meager or beneath him. Once he mastered the notion that nothing is ever beneath him, John the Journeyman began training David properly. With John’s guidance, David began to rapidly change his ways. He began growing up with a pure heart, wanting to become Stonewall’s greatest defender. He led a small group of other young street thieves, much like himself, that he called the “Stonewall Fighters” and began sharing what he had learned. He now spends his days, training, striving to be the greatest warrior possible, while at the same time using his skills and knowledge to uphold peace.

He has told John that one day, he, like his parents, would like to seek out the Dragon Balls, and rather than control the dragons – destroy the Dragon Balls, because no one should have that kind of power, for it would surly corrupt them.

WEAPON: David the Delinquent has a non magical sword given to him by John the Journeyman, who claims it was once his first sword as well.