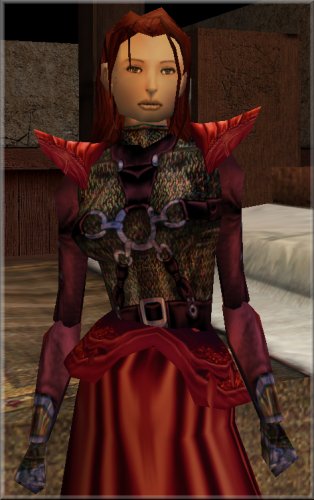 Race: Half-Elf
Occupation: Formerly Chambermaid at the Blackmire Inn, Currently Waitress at The Bar of Destiny
Place of Birth: Klantea
Known Relatives: Mother (Unknown Female Elf), Father (Human Male, Name Unrevealed), Ex-Husband (Unknown Male Name), Chance (Son), Garette (Son), Conner (Son)
First Appearance: Neverending Nights – Thirty Three: There Be Pirates!
History: Daughter to a Human King, Christine was sent to Blackmire City to marry a man her father had arranged for her. Venturing to Blackmire City, she married the man and the two of them had a son by the name of Chance. She named her son “Chance” because she disliked the idea of royalty – everything was always planned out to the very last moment – even her own marriage. Her son, she hoped, would symbolize something that was not always determined.

She voyaged back home, with her son, so that he might meet his grandfather and see the land that he would one day rule over. As she suspected, her father already had laid out plans for his grandson, the heir to his throne. She sighed, and wondered if Chance would not have the freedom she had so desperately wanted, because he would one day be King. On the voyage back to Blackmire City, sailing across the Scarasea Oceans, her ship found itself under attack by an infamous pirate ship – The Black Sparrow. With no way to fight the undead crew of The Black Sparrow, the ship soon found itself boarded. Knowing a fate worse than death would befall her and her son if she remained aboard the ship, she took Chance and jumped off the ship and began treading water. The Black Sparrow destroyed her ship, letting it sink to the ocean depths below. Christine managed to use some of the ship’s remains to cling to, where she floated for several days. She and her son were eventually picked up and rescued by another ship that had just left Blackmire City. It immediately returned to the City, recognizing Christine as royalty.

After a day of recovering in the City, she ventured forth to meet the man she had married; only to discover he had married another, having heard the news of her ship being sunk and the entire crew perished; he believed she was dead. She realized, she now had the chance to truly be free. She returned to the ship that rescued her and paid the crew with what little gold she still had on her to keep her secret – then went to an Oracle to change her appearance slightly. No longer blond, now Christine sported a fiery red hair to match her passionate personality.

She provided for her son, Chance, by taking a job at the Blackmire City Tavern as a Chambermaid. It was here that she met Peter and Grayson, who told her about their own tales (though quite fictional) of sailing through the much dreaded Scarasea Oceans and encountering their own undead pirate crew. She enjoyed their story (though she immediately suspected it was false, because of the inconsistencies between the two of them telling it). Believing Peter to be a Bard of some kind, she kept in touch with Peter (hoping that he might come around and tell such stories to Chance as Chance grew older).

After the defeat of the Dragon of Silverlake, Peter contacted Christine and asked her to come work at their bar – The Bar of Destiny. He promised that he would pay her a great amount of money, knowing that she was providing for her and her son in Blackmire City. Christine accepted the job, and became the highest paid employee at The Bar of Destiny. It took only one week for her to have enough money to live comfortably and never need to work again – she knew what Peter was doing. He was paying her enough money so that she could spend time with her son and never need to work again. But she continued to work at the Bar of Destiny, to be an example for her son – that everyone should work hard in life, even if they have everything they ever needed. As fate would have it, she would meet a man at the Bar of Destiny, whom she would grow to care for. Together, they had a two sons named Garrett and Conner.

NOTE: Christen is a strong, capable woman that none – male or female – would do wise to mess with.