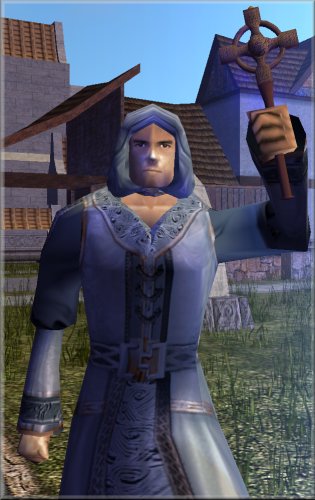 Auric took up the guise of a Mortal by the name of Zoe-Din. Fearful that the would be Bloodline would be hurt or worse – Zoe-Din took on Priestly abilities. As fate would have it, and as his visions had predicted – The Bloodline came to him. It was not Peter or Grayson that had been injured however – it had been Pawl the Dorf. Auric sensed something within Pawl’s bloodline – something he tried to trace back, but could not. Pawl had explained that he had been raised by humans, but that did not seem right. There was more to Pawl the Dorf. Auric agreed to ‘reincarnate’ Pawl since the adventurers could not afford a full resurrection (Auric still felt compelled to not completely over step his bounds by the Oath he had made).

Pawl the Dorf perished a number of times, returning back to Auric’s temple for another attempt at reincarnation, until he finally perished – and by this time, Auric had discovered that Pawl the Dorf came from the long line of Mysticforge Bloodline, responsible for making the Blade of Destiny thousands of years ago, to fight Dragonkin (namely the evil and overly greedy Chromatic Dragons). Auric had come to realize that Pawl’s parents feared that the Chromatic Dragons would come seeking him out and that it was better to hide him among the humans, where he might be safe. The Dwarf’s birth name was not Pawl – that had been given to him by the humans – it was truly Taylor. Auric, against his own Oath, reincarnated Pawl as a Dwarf and reunited him with Peter and Grayson to nudge them along Destiny’s Path.

Auric has enjoyed his time among the mortals, and even after the defeat the dragons Crimson and the Dragon of Silverlake; Auric remains in Blackmire City, under the human guise of Zoe-Din, where he had often assisted the citizens against battles against the undead armies that have marched against it.

NOTE: Zoe Din carries a wooden cross at all times, since Blackmire City has often been marched upon by the Undead Pirates, namely of the Black Sparrow crew, since it is so close to the Scarasea Oceans.