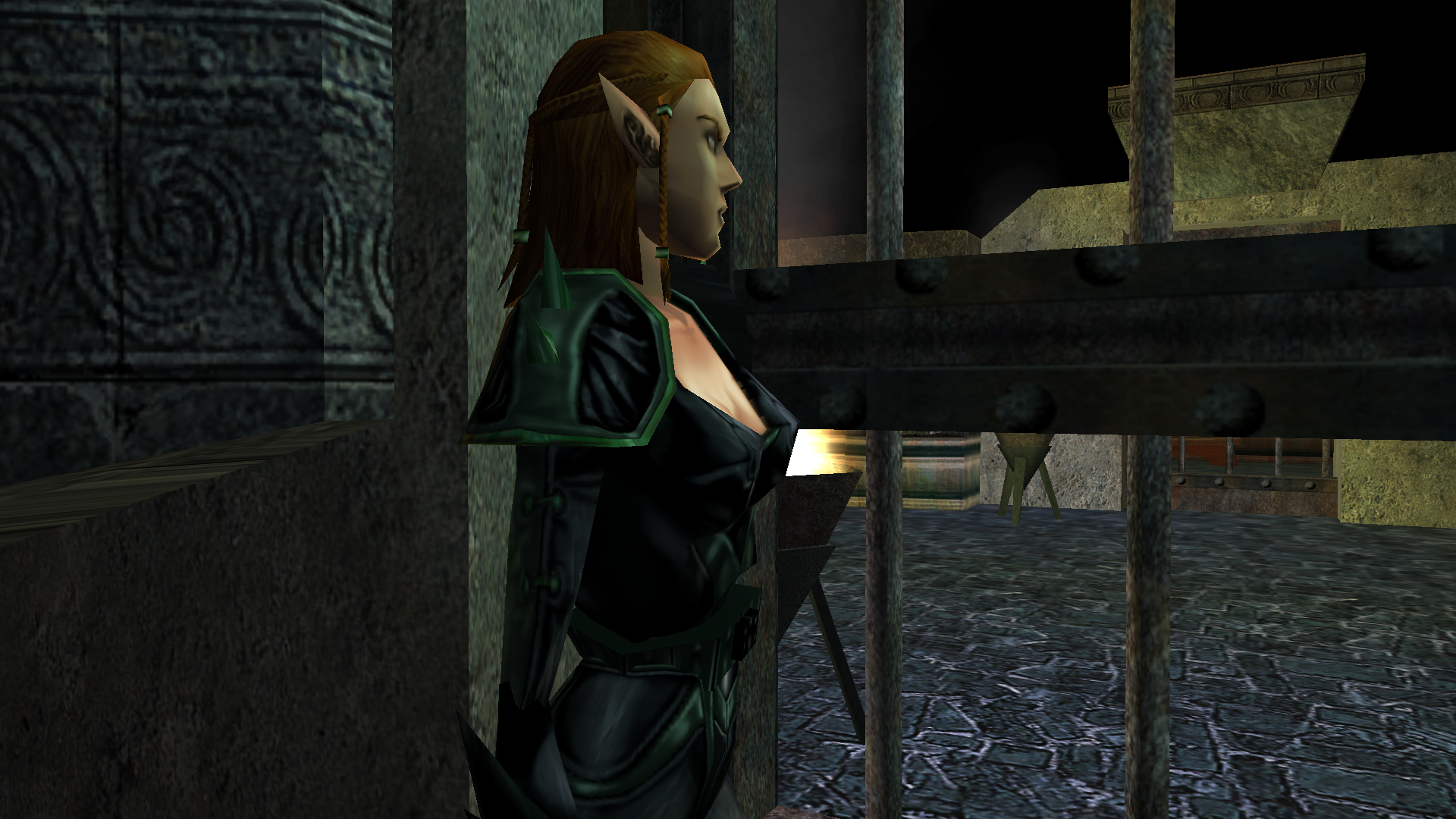 EPISODE 43: GOT TIME TO KILL: Episode 43 marks the beginning of an end; Episode 43 is the first Episode of Season 3, which is the final season of our beloved show. So where do we pick up considering the cliff hanger from almost a year ago? Peter and Grayson awaken to find that their situation has not gotten any better… and there’s some gaps to fill in their memory… can a mysterious guest help them fill those time gaps? Find out in this episode! Please share! Like! Subscribe! It helps us out tremendously! 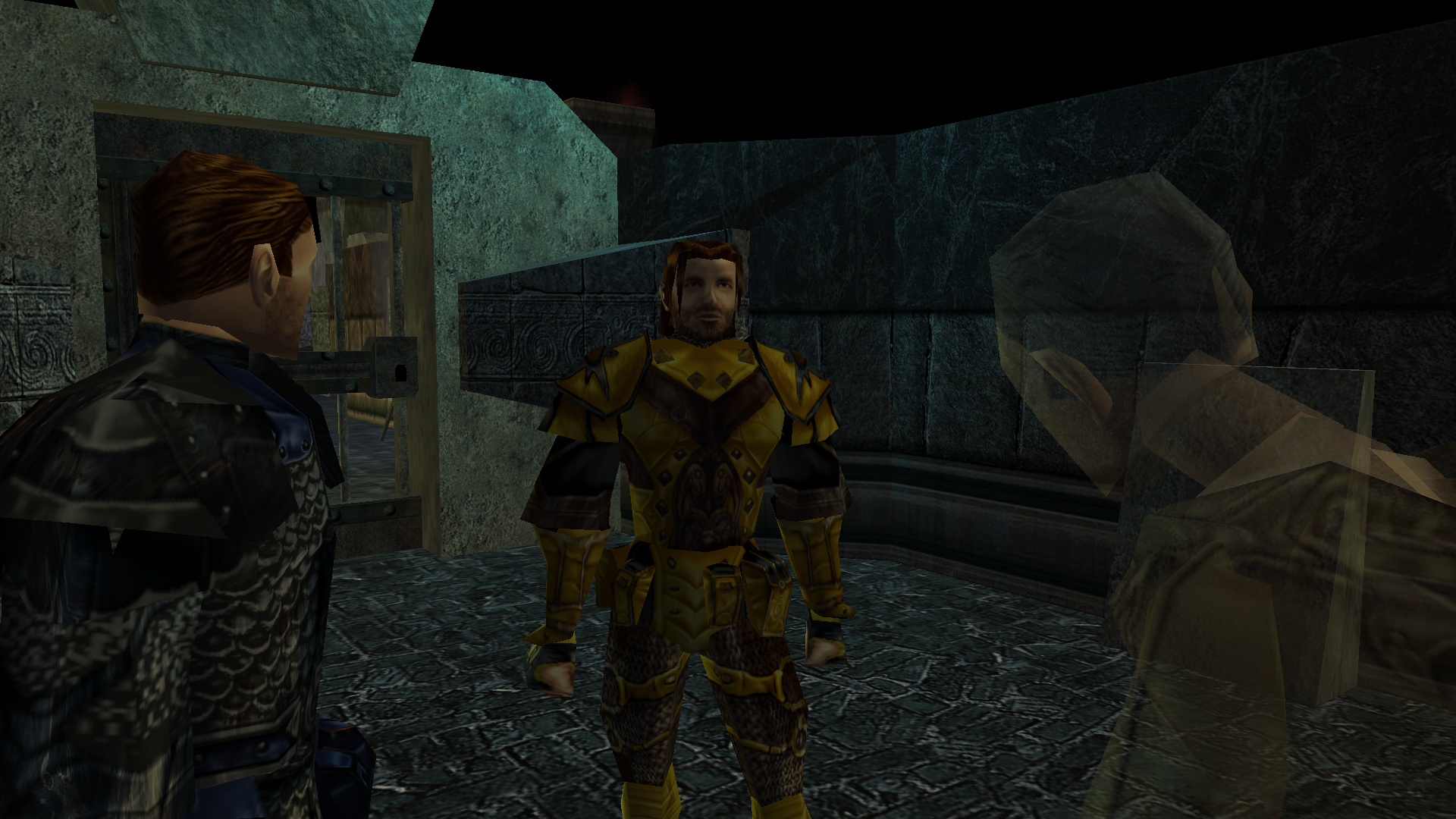 EPISODE 44: SEEING THE UNSEEN: Peter and Grayson make a startling discovery – that they’re not alone – in their own prison cell! (For those of you who thought you were seeing something weird in Episode 43 every once in awhile; that ‘ghostly figure’ finally reveals itself!) But – who or what? – is it – and what can it mean for our dynamic heroes?

Oh, also – you might want to hang out during the credits on this one for some out takes. 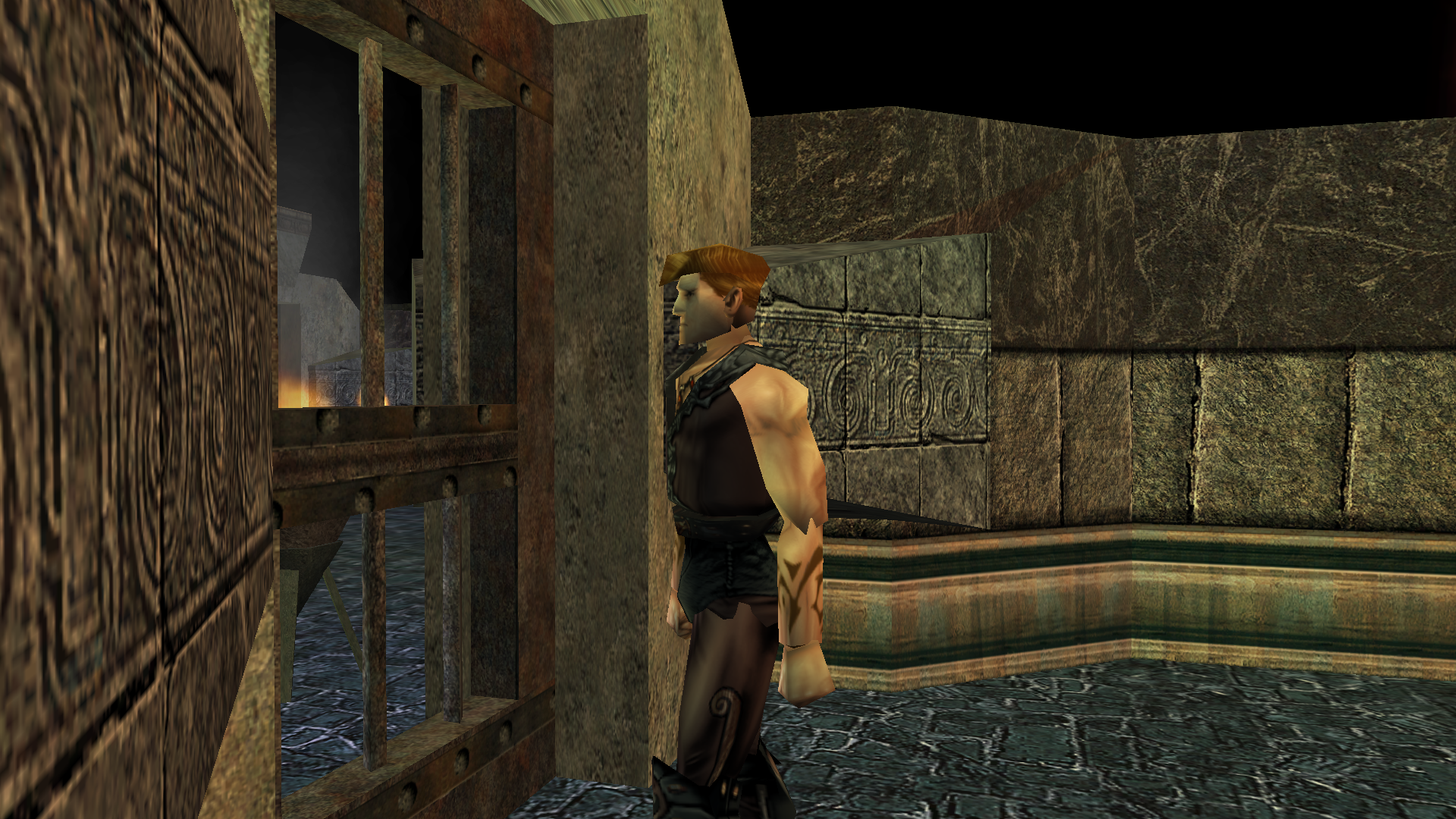 Oh, also – you might want to hang out during the credits on this one for some out takes. 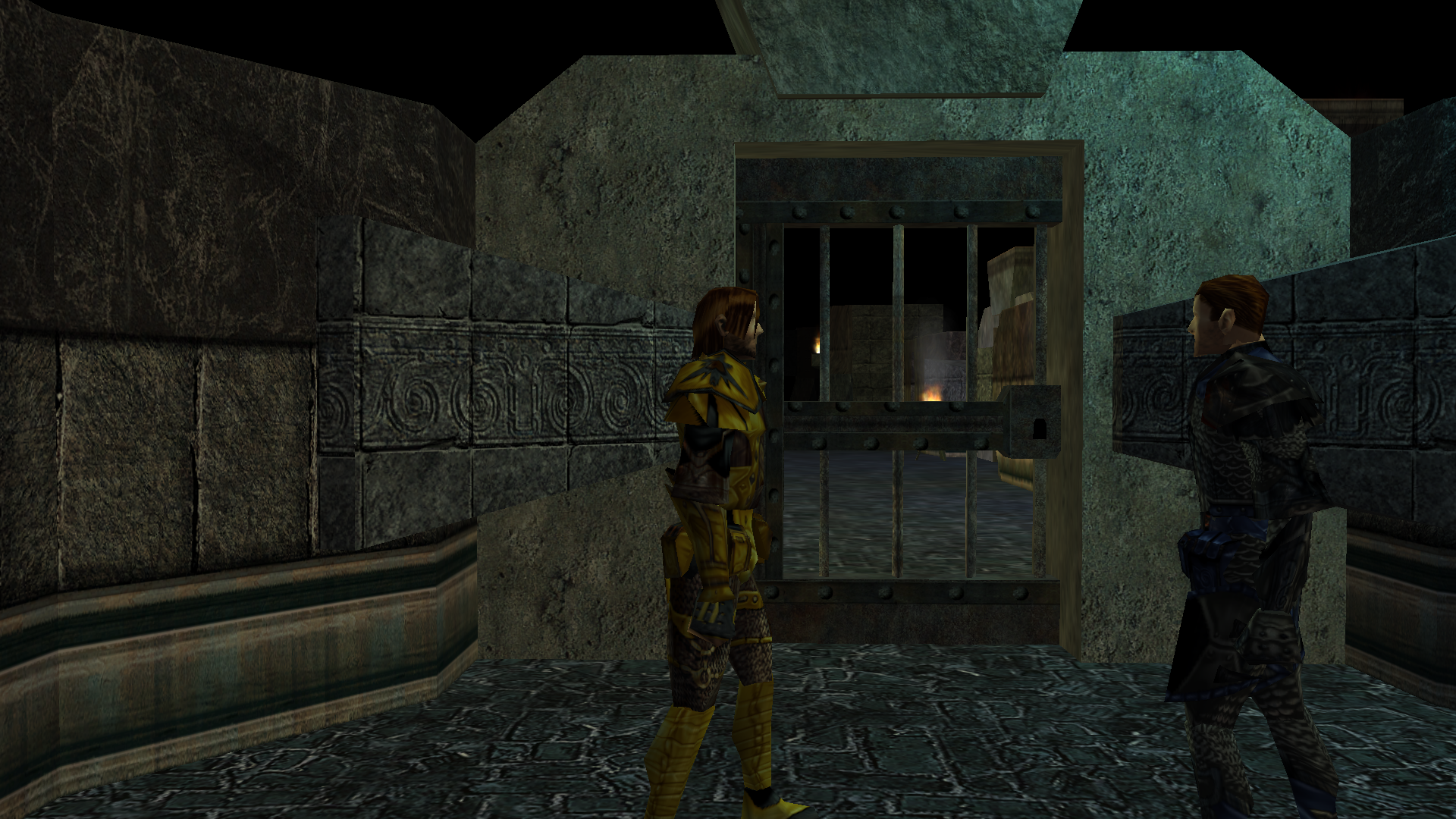 EPISODE 46: DUDE, WHERE’S MY SWORD?: #NeverendingNights Episode 46 (HD) – Grayson awakens and realizes, perhaps after all this discussion about his sword from the last episode… that he doesn’t know WHERE his sword is! Peter and Grayson try to piece the last fragments of their memory to try and figure out just what may have happened… 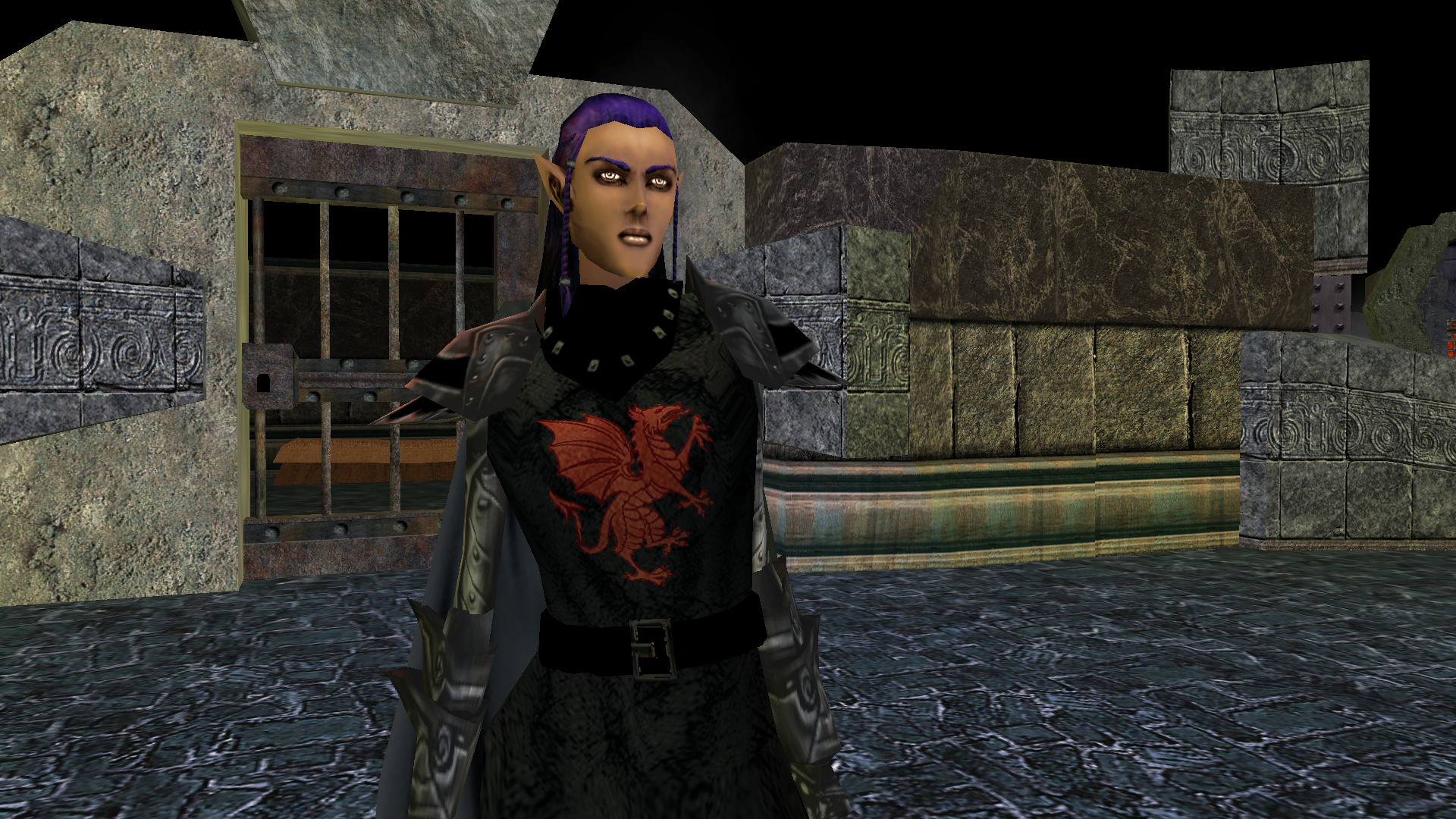 EPISODE 47: A NEW HOPE: #NeverendingNights Episode 47 (HD) – Peter and Grayson (and their Invisible Stalker friend) have spent a long time locked up in that cell together… when suddenly a member of the Crimson Draco Legion appears… but things may not be as they appear to be as this episode takes a turn… but is it for the worse?
Episode 47 (HD) 1080p – (614 MB) NEW!
Episode 47 (HD) Youtube NEW!
Episode 47 (HD) Facebook NEW! 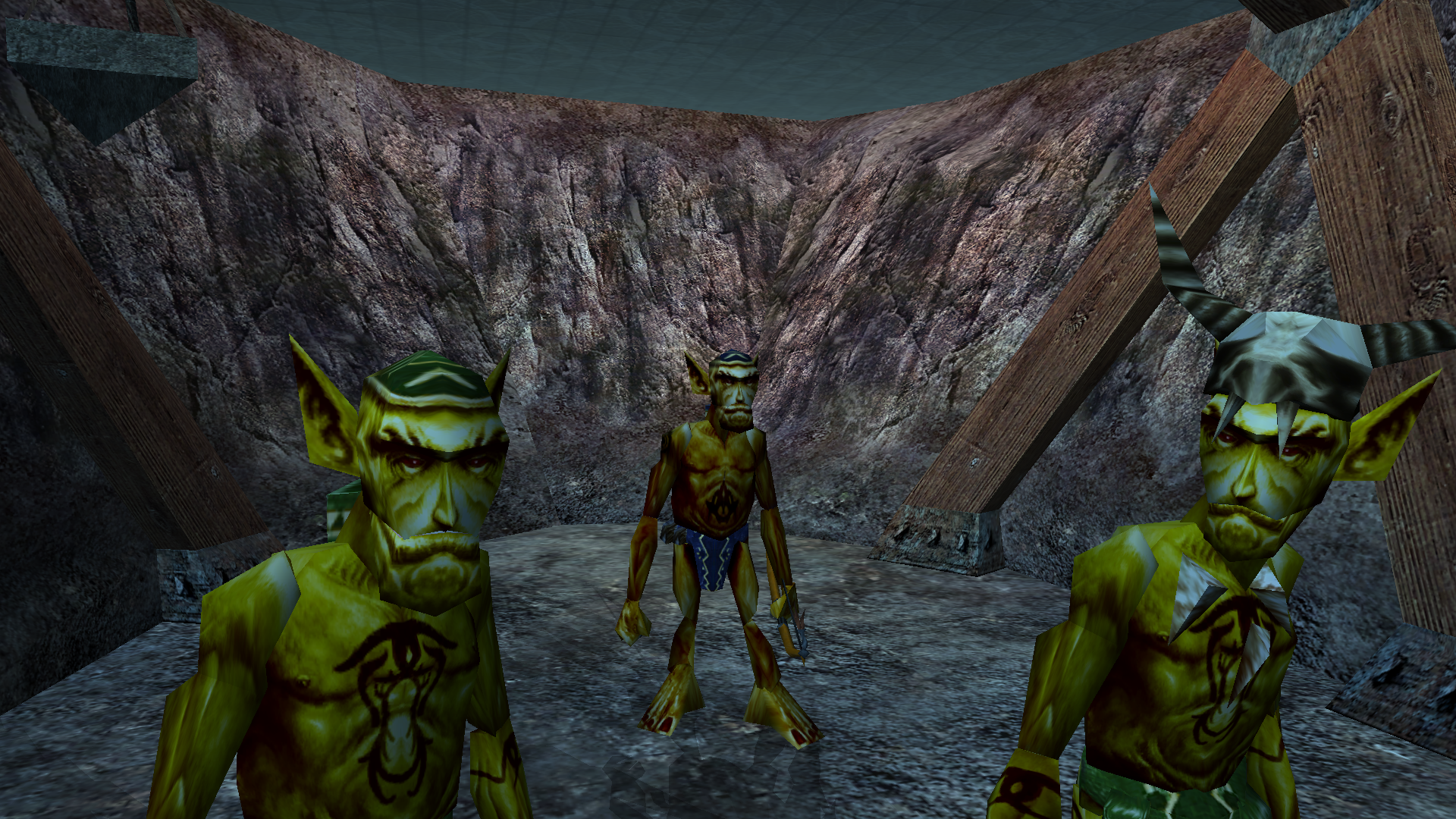 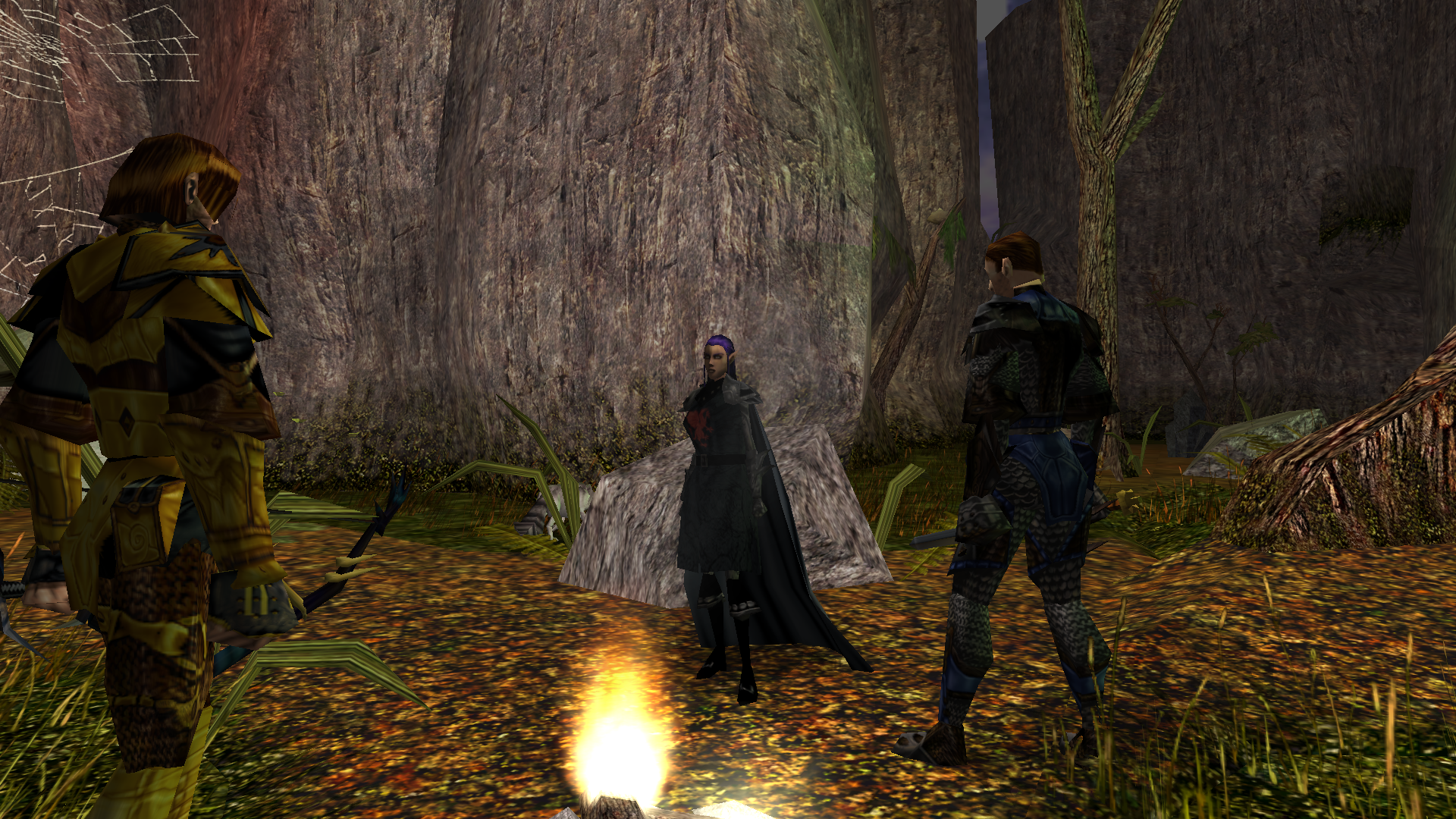 EPISODE 50: DESTINY OR CHANCE?: #NeverendingNights – Grayson and Peter have escaped the Crimson Draco Prison thanks to Amiee the Armorer’s help – and she lays down some heavy information about Destiny and Dragons (D&D?)… but is Peter right about what he said in this episode? What did he say? Guess you will have to watch it!
Episode 50 (HD) 1080p – (271 MB) NEW!
Episode 50 (HD) Youtube NEW!
Episode 50 (HD) Facebook NEW! 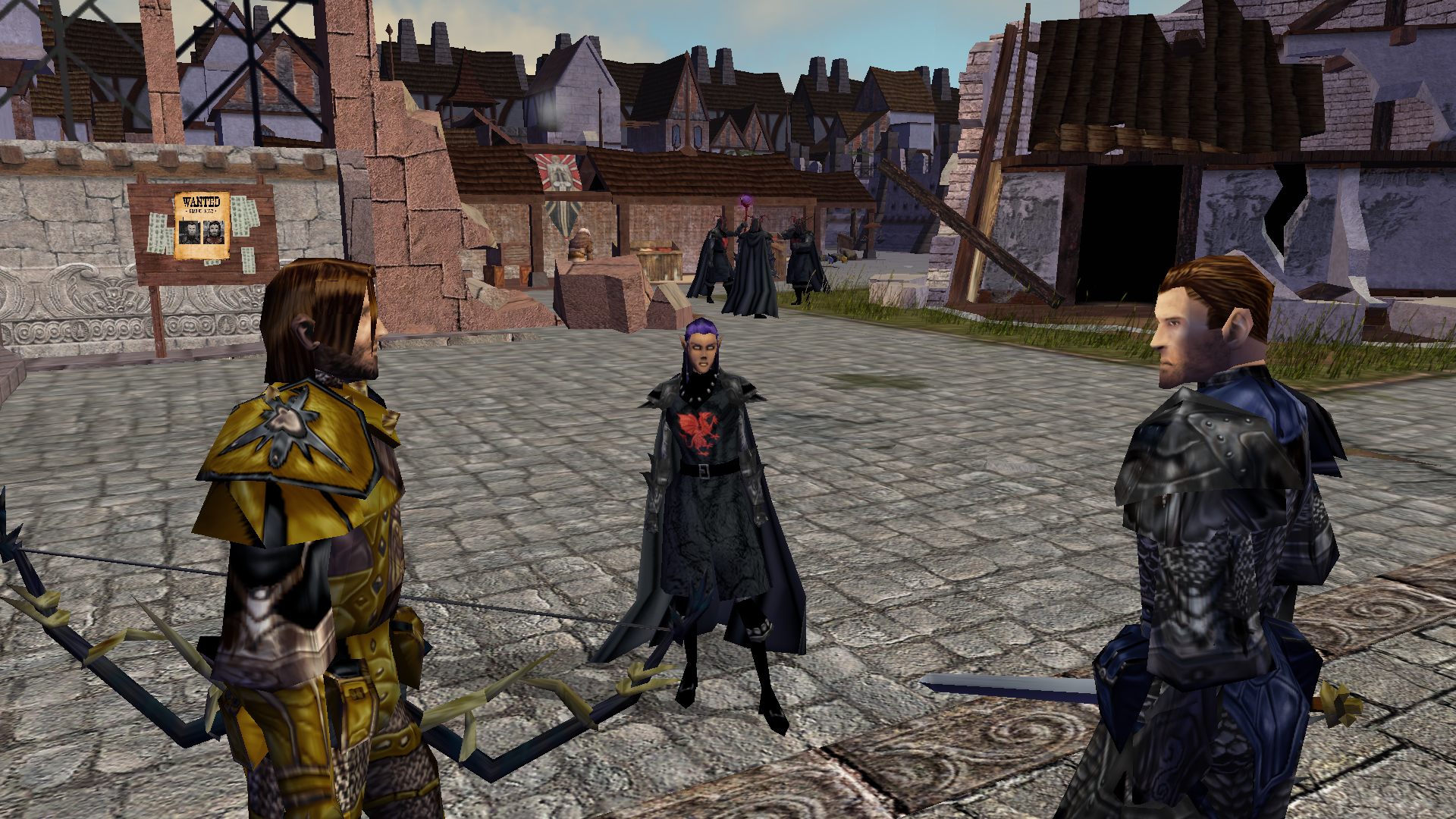 EPISODE 51: WANTED: DEAD OR ALIVE: #NeverendingNights – Peter & Grayson, along with Amiee the Armorer, enter a new town and discover that the Crimson Draco Legion have wanted posters of our would be heroes… and suddenly, Amiee the Armorer finds herself with a very, very difficult choice… 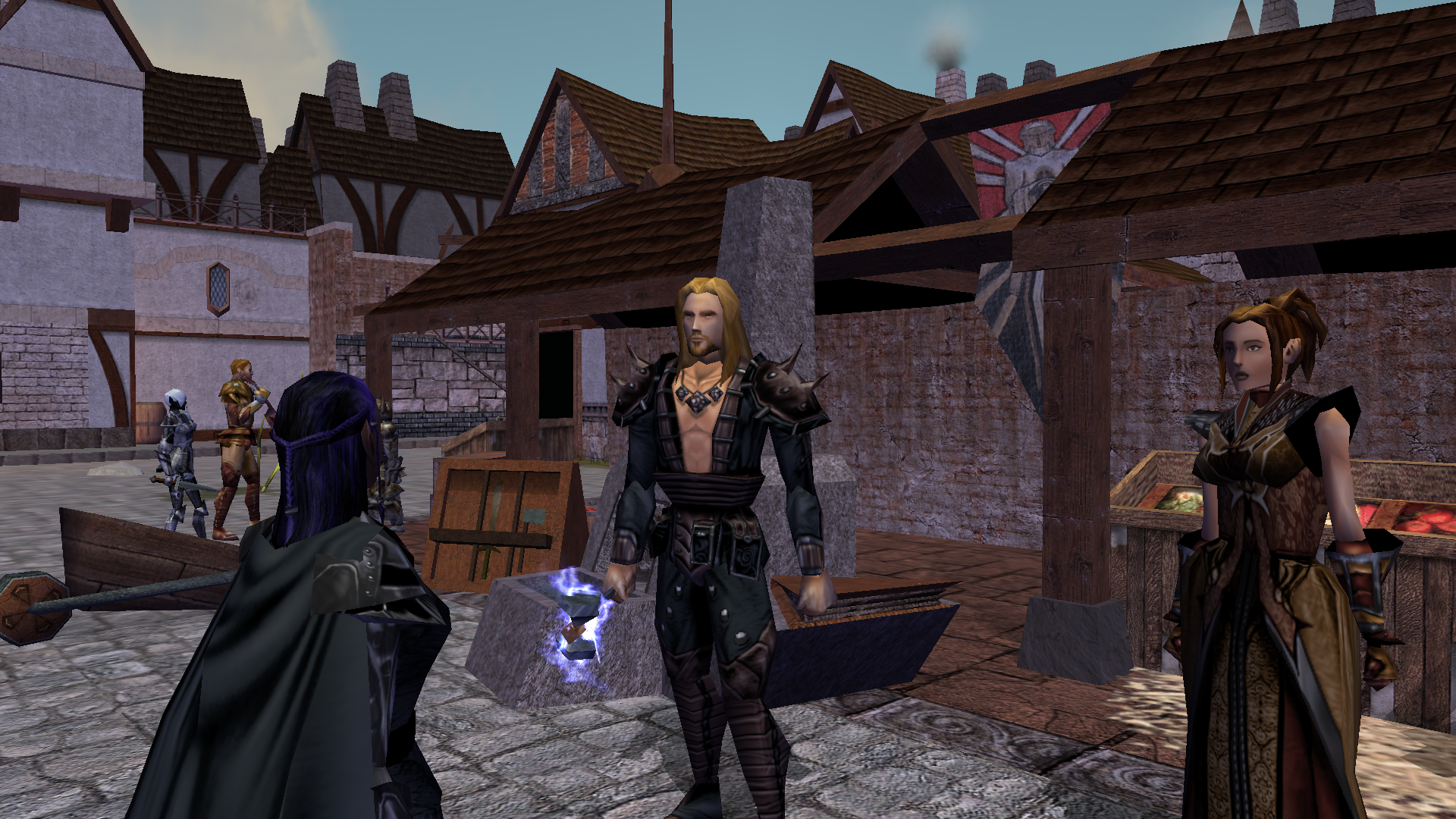 EPISODE 52: THESE AREN’T THE HEROES WE’RE LOOKING FOR: #NeverendingNights – Peter & Grayson, along with Amiee the Armorer, enter a new town and discover that the Crimson Draco Legion have wanted posters of our would be heroes… and suddenly, Amiee the Armorer finds herself with a very, very difficult choice… 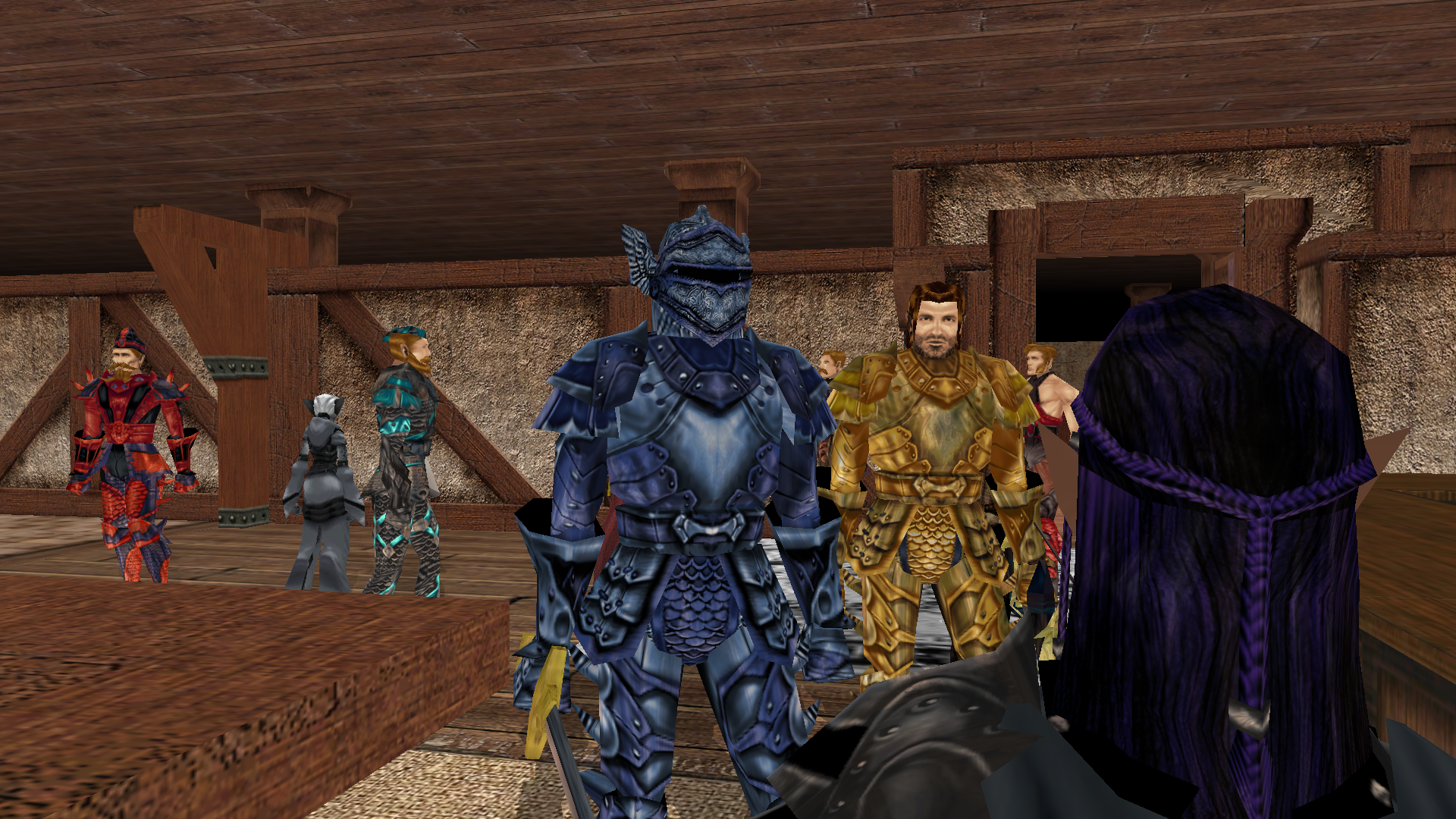 EPISODE 53: FORGING DESTINY: #NeverendingNights – Amiee the Armorer has gathered some… potentially?… useful information from the local bartender at the Pomtom Inn. But what could it mean? (You may want to hang out after the credits this time!) 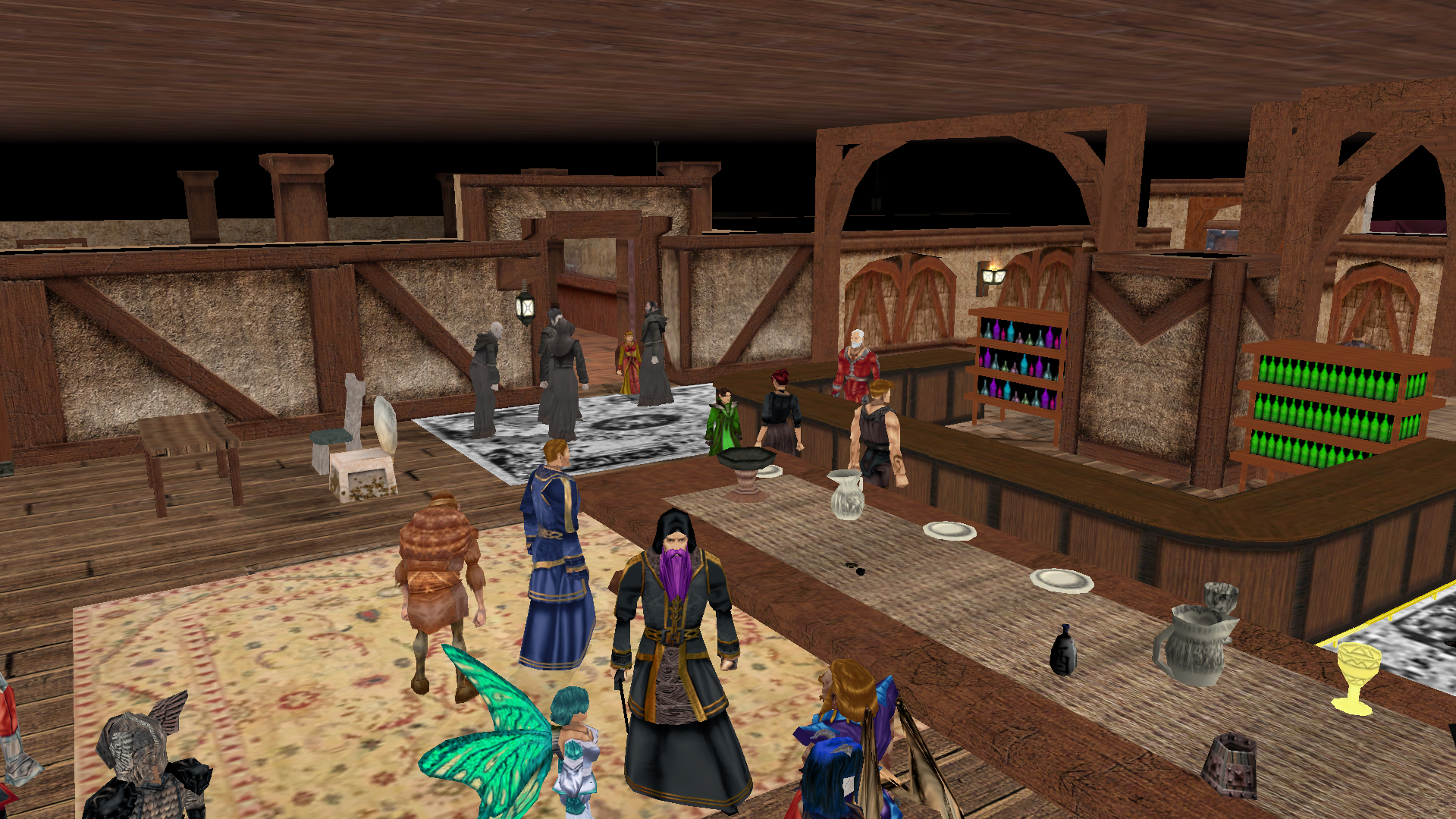 EPISODE 54: BACK BY (SOMEWHAT?) POPULAR DEMAND:
#NeverendingNights
Alan the Astounding wakes up from being passed out on the pier and stumbles to the closest tavern. But why has he shown up? What’s he after? What is his quest? Will we see more of him? And who is the hottie he’s talking to in the tavern? All this and more is revealed in this episode! 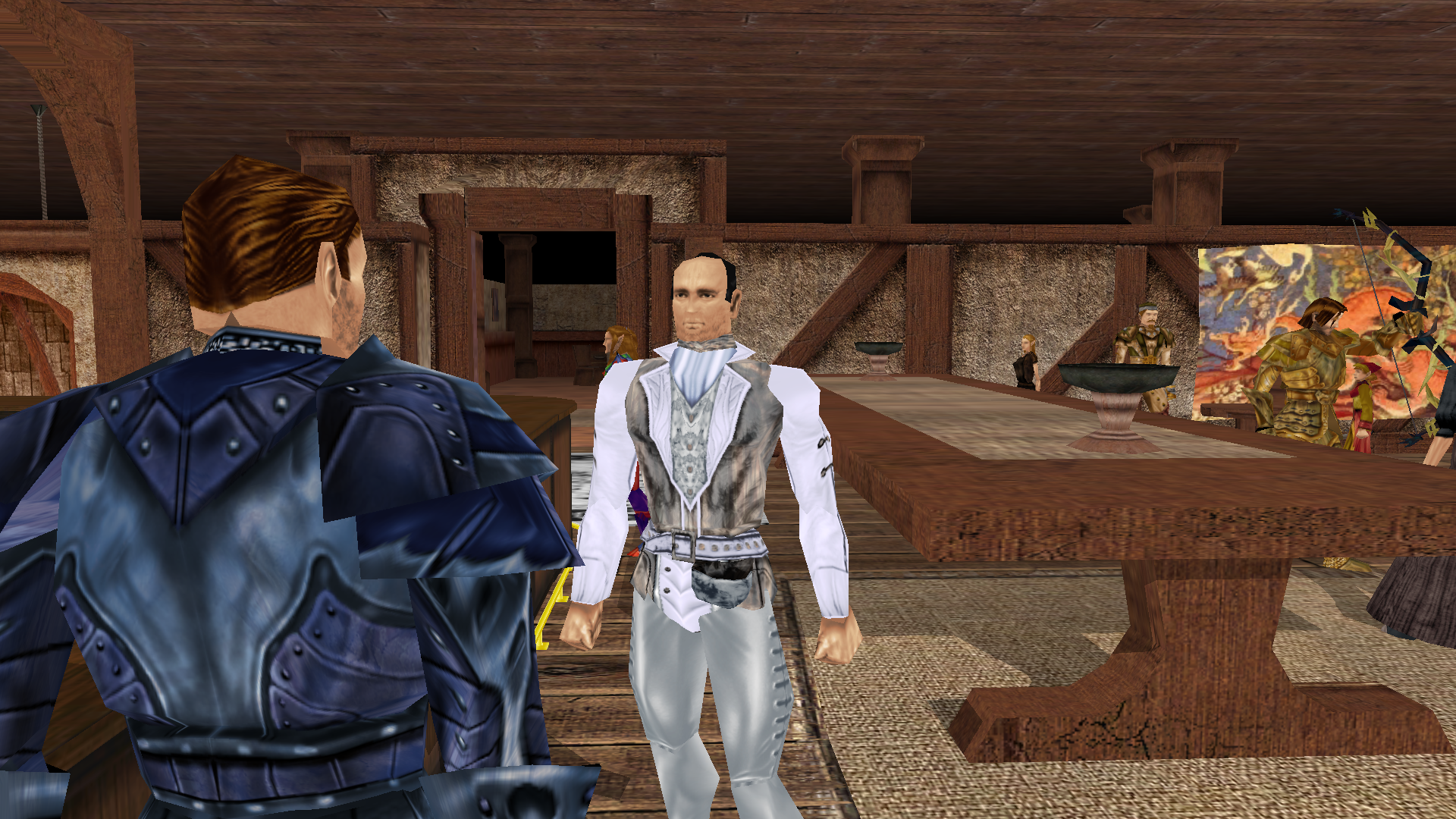 Grayson is trying to figure out how Peter is getting all the ladies at the tavern – and get some pick up advice from a guy in a white leisure suit!
This episode has a very special appearance from Al Lowe from Leisure Suit Larry fame! As well as Jules, who I also originally met thanks to Sierra On-Line! Very special episode! This version – after the episode ends – Peter shares a story that’s based on a D&D Session run from my friend Paul (which is only in the HD version). 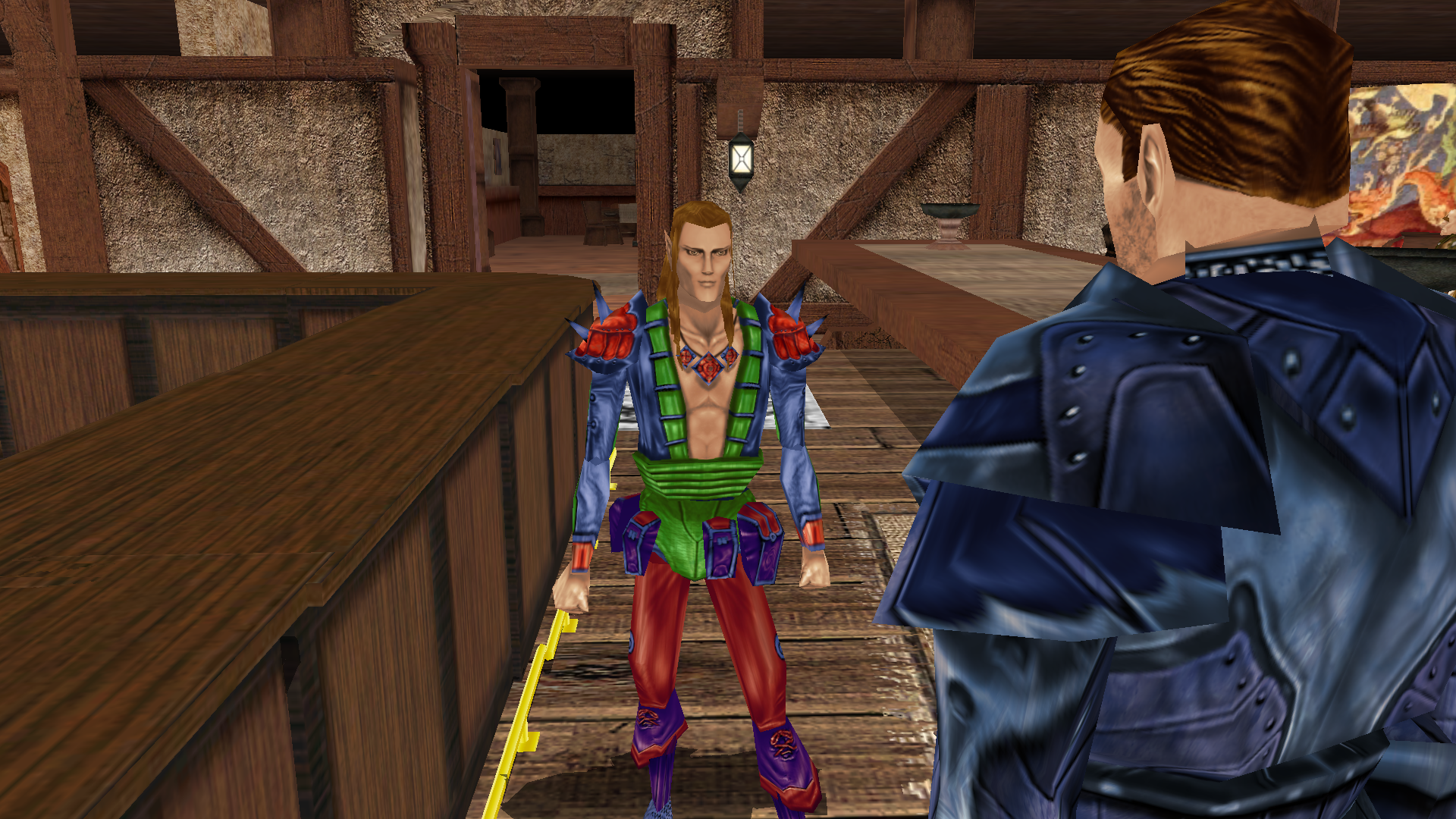 Grayson learns a thing about an oddly colorful individual at the bar about “Funkafying” himself and raising his “Funk-Fu.”

This episode has a very special appearance from Greg Johnson of Toejam and Earl fame! 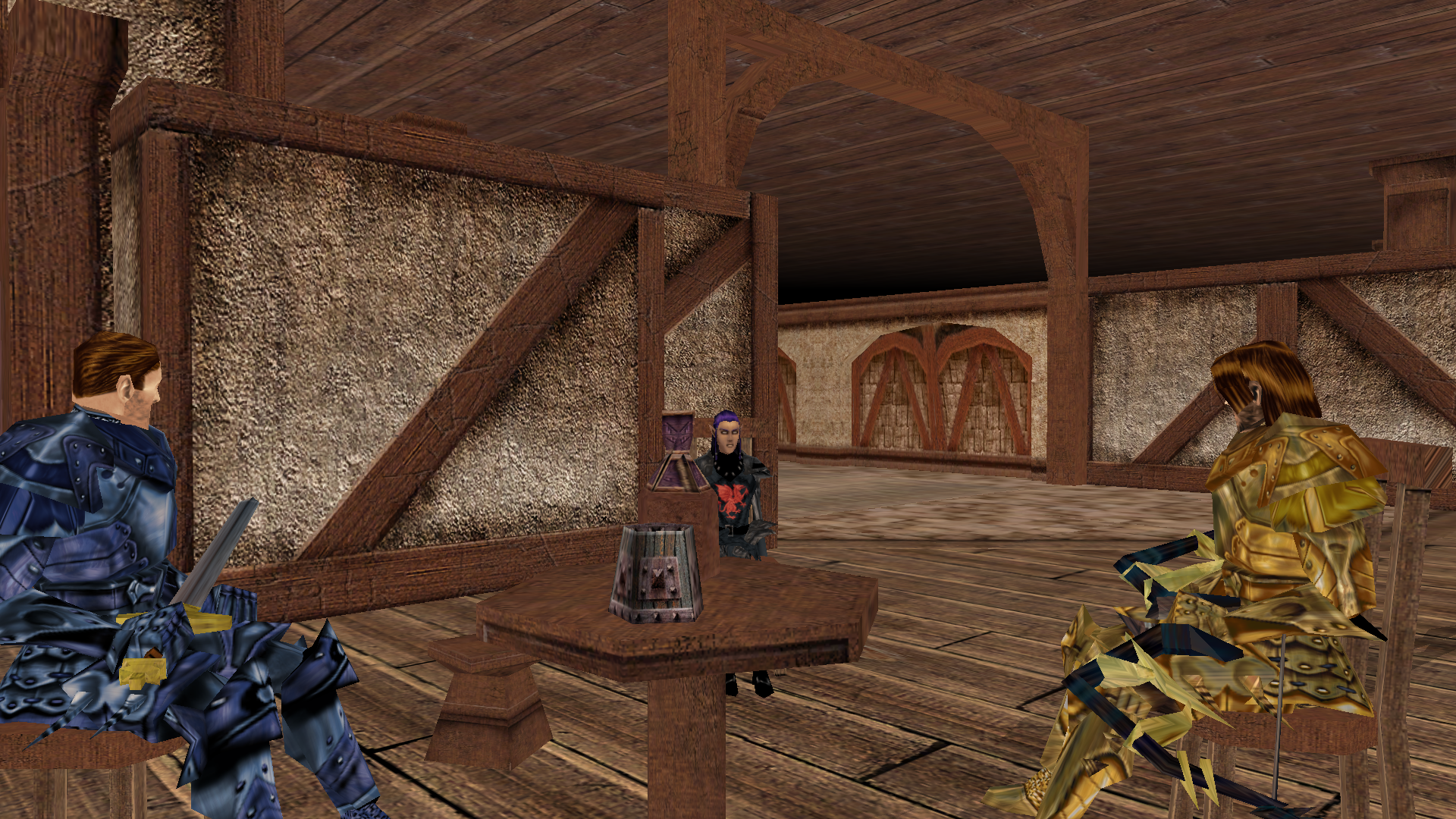 EPISODE 57: PAWN OF THE DEAD:
#NeverwinterNights #Machinima
Amiee the Armorer has gathered information about the Forge of Eternal Flame and the next steps for getting Grayson’s magical sword reignited to complete it’s final quest… however, things won’t be so easy. 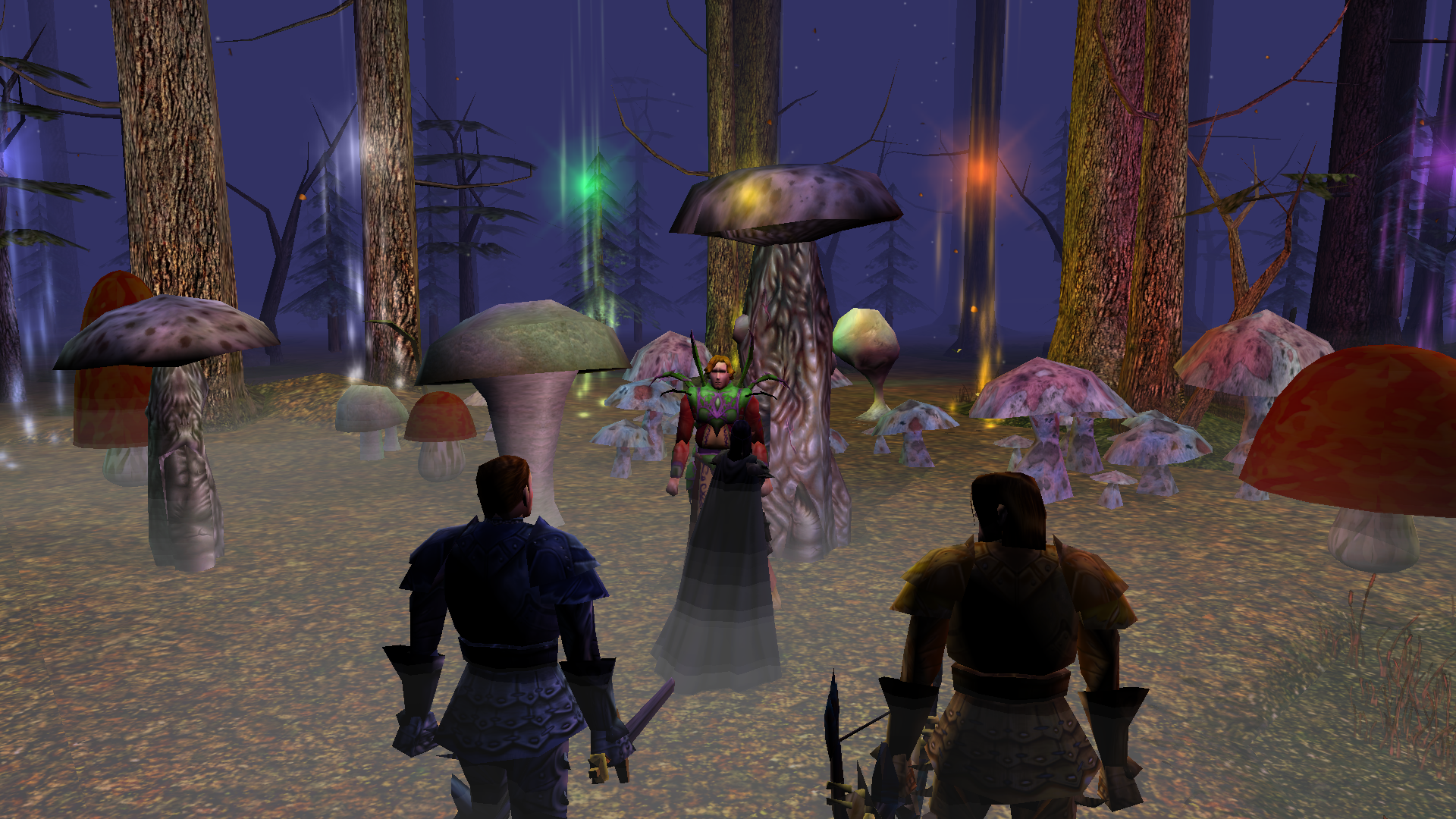 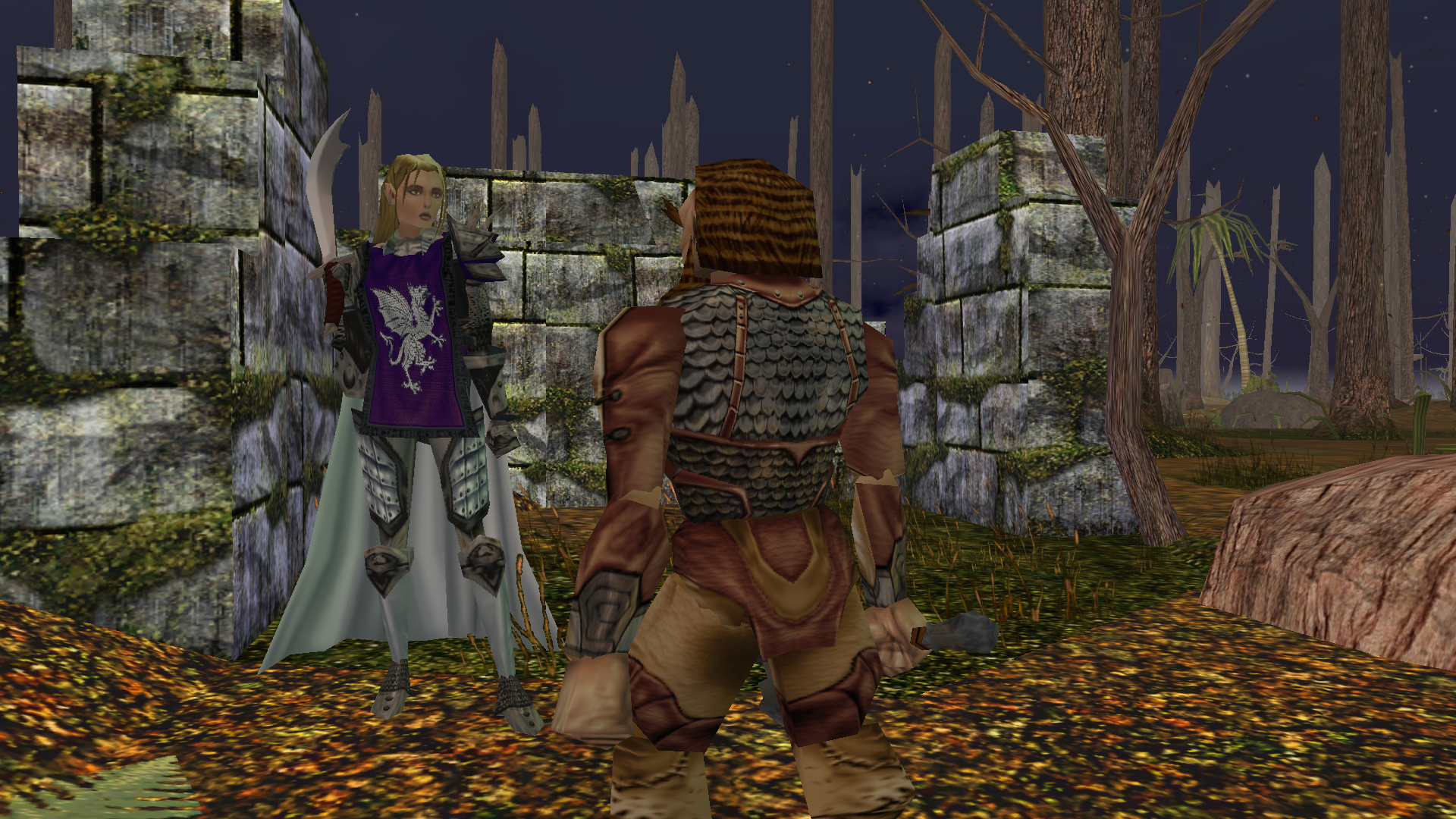 EPISODE 59: THESE ARE MY CONFESSIONS:
#NeverendingNights #Machinima #NWN #Neverwinter #NeverwinterNights
Pawl the Dorf and Andrea – wait – is that Andrea? She now goes by Ruth the Redeemed – walk down the path and discuss why she rescued Pawl, and where Grayson is (she doesn’t really care about Peter). Ruth reveals a startling secret about the Blade… and the infamous Dragon of Silver Lake…
Episode 59 (HD) 1080p – (812MB) NEW!
Episode 59 (HD) Youtube NEW!
Episode 59 (HD) Facebook NEW! 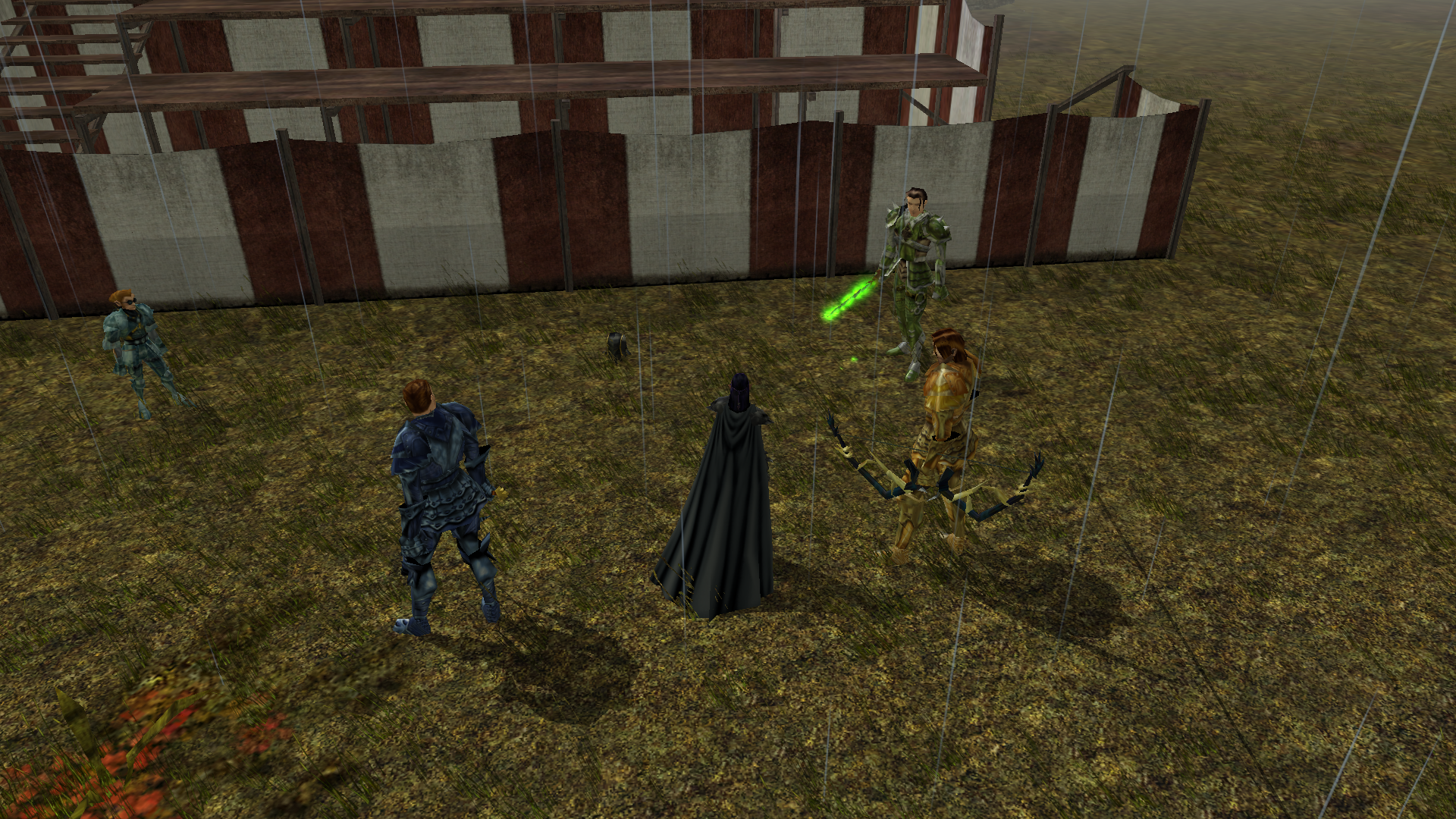 EPISODE 60: BUT I’M A LOVER, NOT A FIGHTER:
#NeverendingNights #Machinima #NWN #Neverwinter #NeverwinterNights
When it comes time to get Grayson some professional Warrior training, Amiee the Armorer, Peter the Ranger and Grayson the Fighter make it to a town that they’ve been looking for – now the question is – will anyone be able to provide Grayson the Warrior skill he desperately needs in order to fulfill his “Destiny.” Find out in this episode!
Episode 60 (HD) 1080p – (353MB) NEW!
Episode 60 (HD) Youtube NEW!
Episode 60 (HD) Facebook NEW! 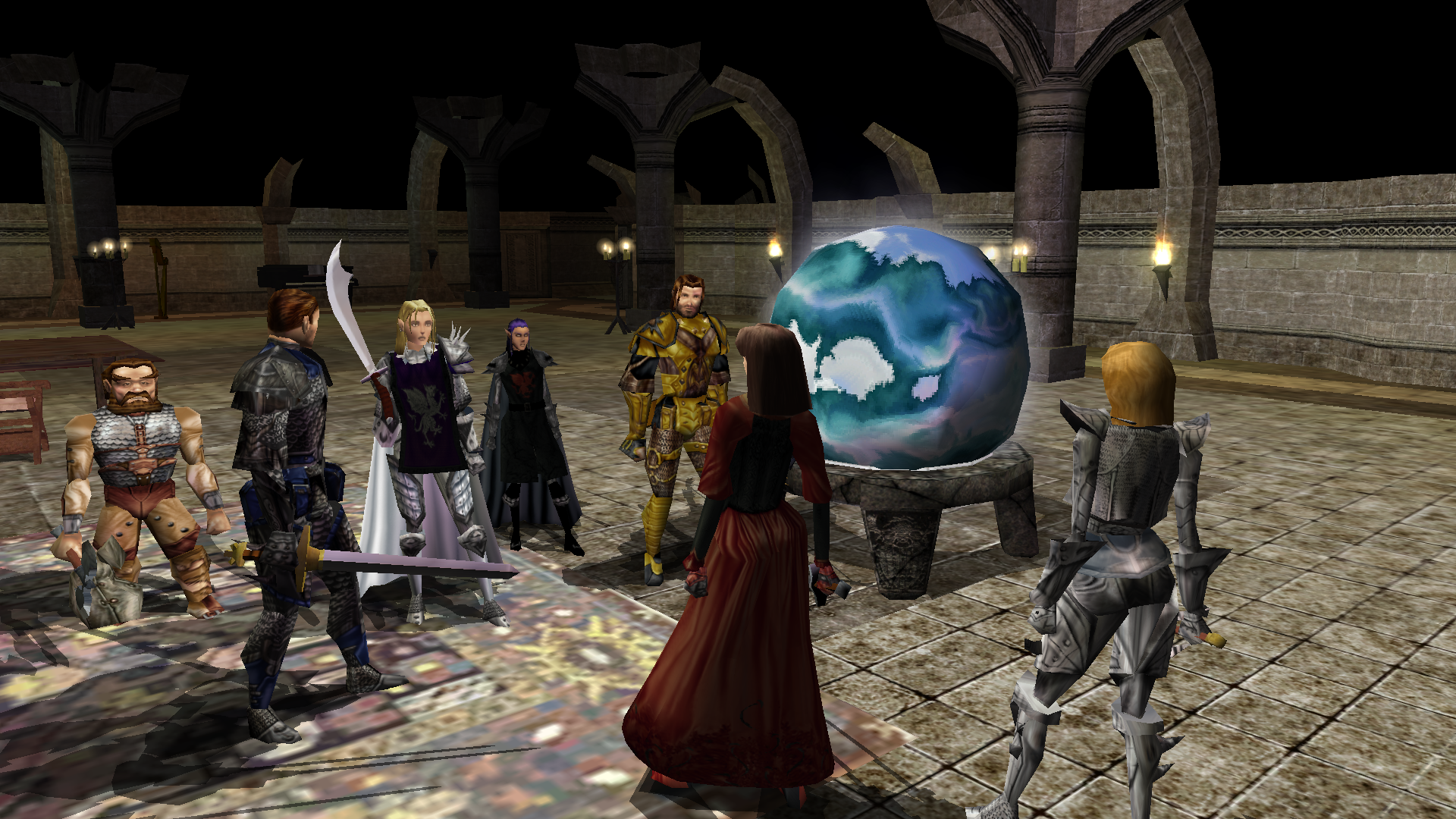 EPISODE 61: REUNITED AND IT FEELS SO GOOD (WAIT DIDN’T WE DO THAT LAST SEASON?) : 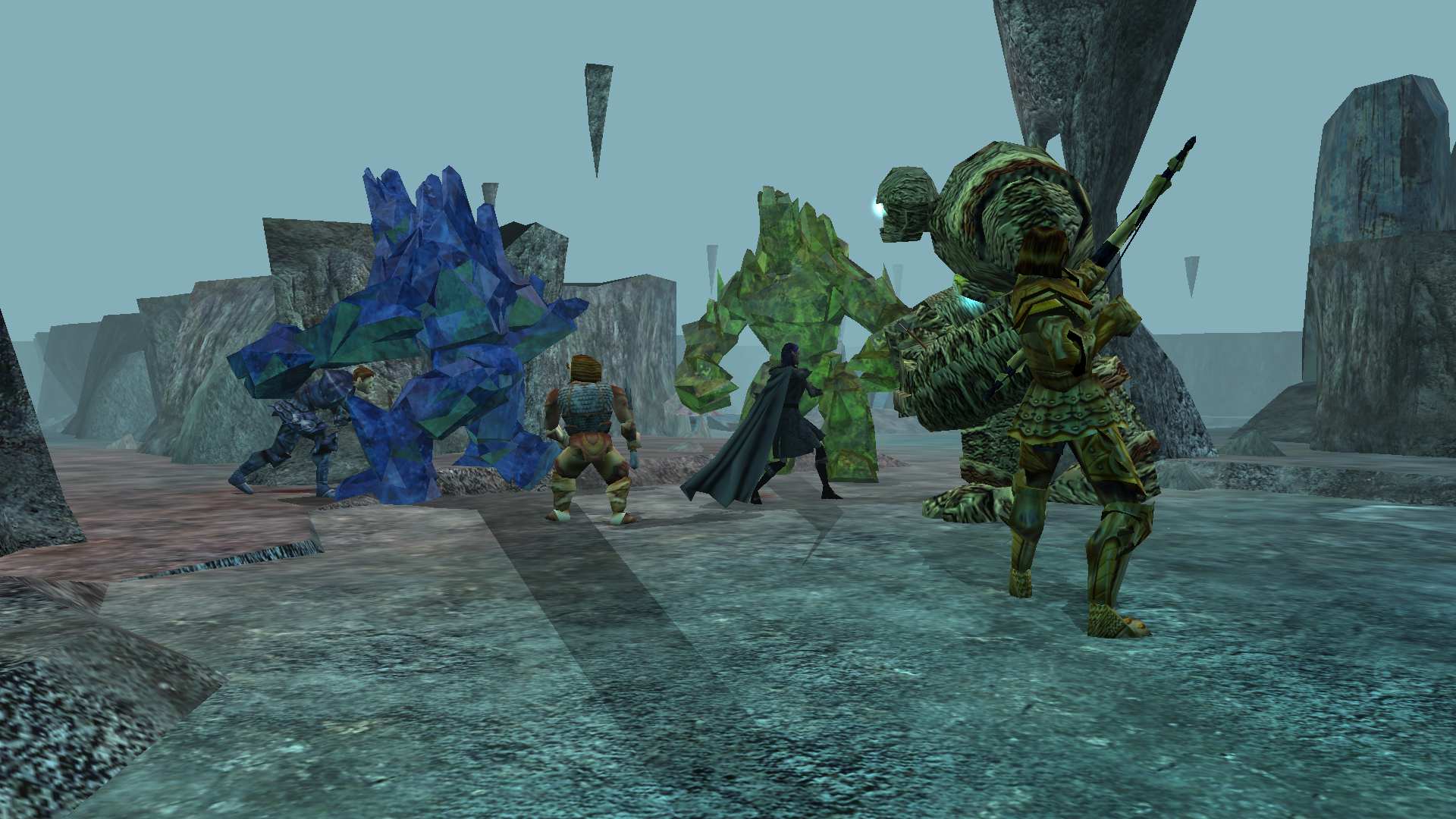 EPISODE 63: THE FALL OF A HERO :
#NeverendingNights #Machinima #NWN #Neverwinter #NeverwinterNights
This is it! This episode we finally discover the secret of the Dragon of Silver Lake – first mentioned all the way back in Episode 09! (Talk about the long build up!) Is it truly dead? Is it alive? Is it even a dragon? BUT! One of the heroes will NOT live to see the end of the episode… who will perish? The Episode that sure to break the internet! (If you share it and tell the world how awesome the show is, that is!)
Episode 63 (HD) 1080p – (366MB) NEW!
Episode 63 (HD) Youtube NEW!
Episode 63 (HD) Facebook NEW! 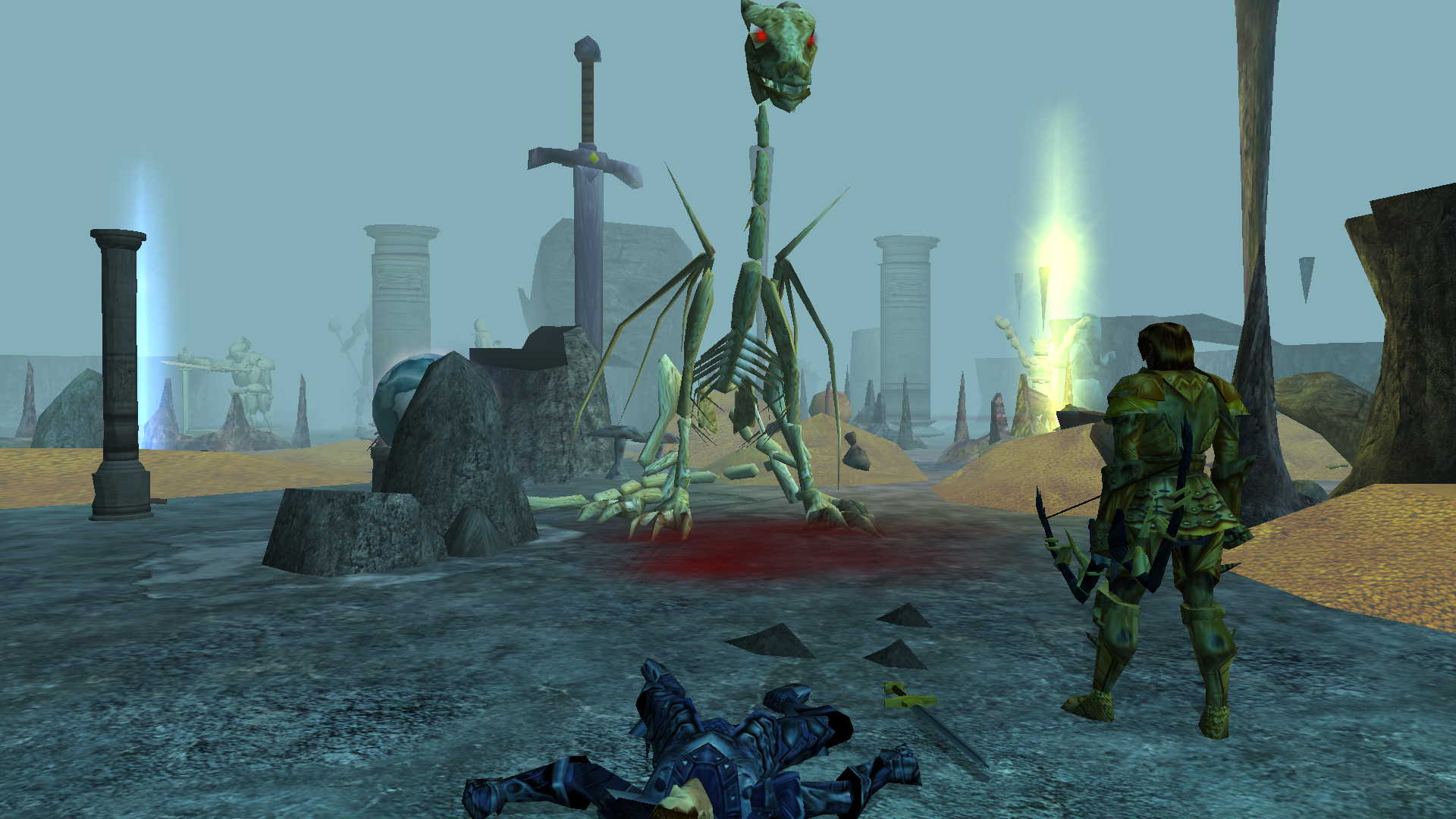 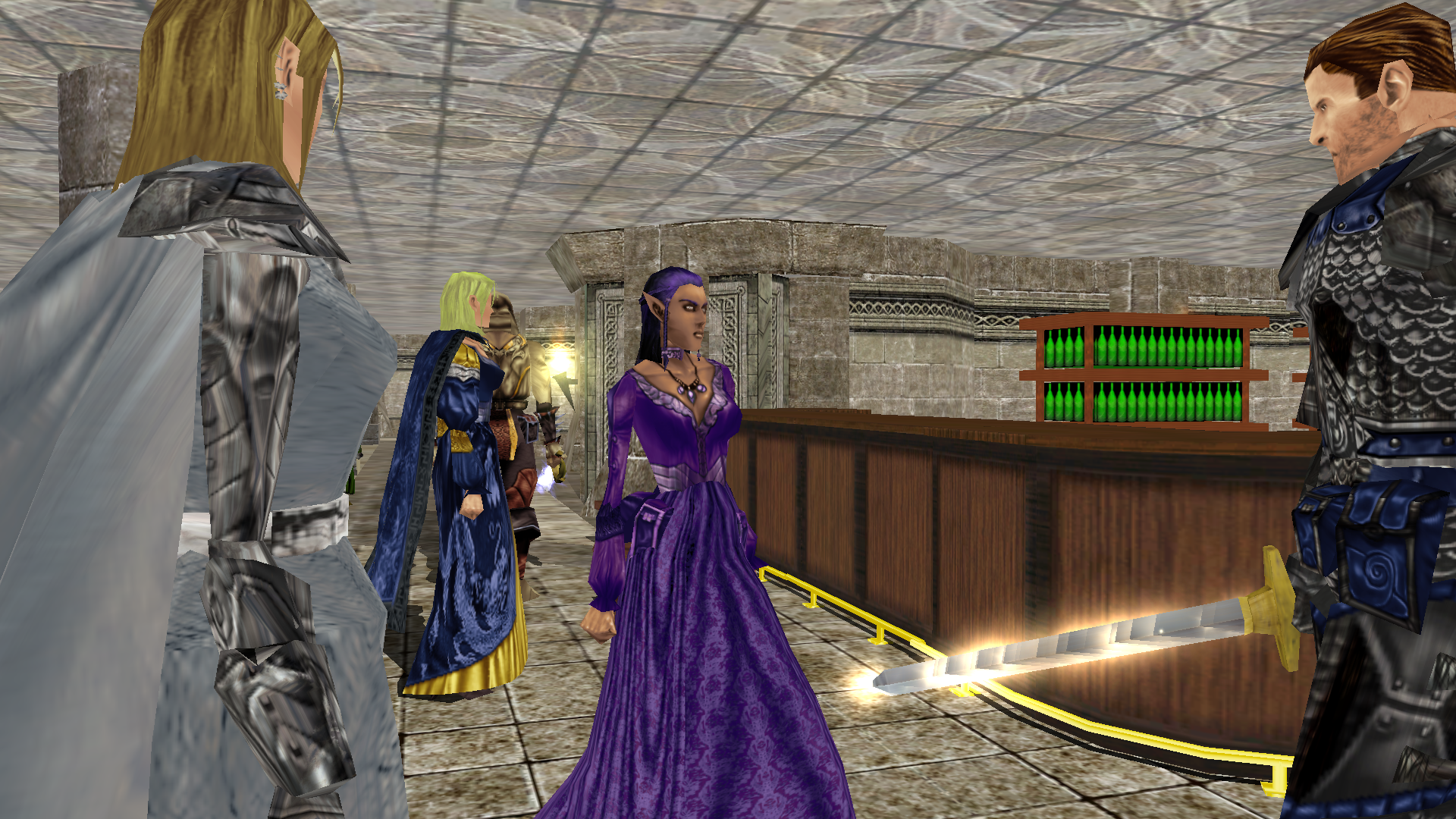