“It intrigued me, it also scared me…” ~Richard Cox, MMORPG

Wizardry Online is the most hardcore fantasy MMO ever created. The difficulty level is insane. The dungeons are brutal. There is no auto-healing. You will earn your levels. Your crimes taint your soul. Your allies could betray you at any moment. And when you die, you die forever. Are you ready for the challenge?

It has been a long and adventurous journey, but I am proud to announce the launch of Wizardry Online!

I would like to start off by thanking all the participants of both the closed and open beta of the game. Your feedback was incredibly valuable to our development of Wizardry Online and our continued efforts in delivering a re-imagined MMORPG that stayed true to the franchise’s hardcore trademark features. I sincerely hope that you will continue to be an active participant on our forums.

Going forward, we plan to release additional content including new dungeons, outfits and special events for players to experience as the game continues to grow and advance. The first of these additions, the Underground Dragoon Ruins, is ready and waiting for you as soon as you log in! Dodge traps, battle fearsome foes, and collect more powerful treasure than ever before.

Looking back at my own experiences in the beta, I can’t help but remember the adrenaline rush I felt when my first character failed a roll for revival and was turned to ash. I remember the sweat beading on my forehead as I searched through my backpack for an item to sacrifice in order to save my character. A sense of relief washed over me after surviving… at least for another day. Its experiences like this that make Wizardry Online stand out from the rest.

Wizardry Online has given me an opportunity to relive fond memories of old school games, and a feeling of challenge that has been missing from many other titles these days. I look forward to seeing all of you in game as we begin this adventure together.

PS. If I catch you skulking around Caligrasse Sewers, harassing the noobs, the guys from QA and I are definitely going to gank you.

That said, as I previously posted… I had a different take on the BETA of WIZARDRY ONLINE.

When I heard about Wizardry Online, I was beyond excited. You see, some of my first CRPG games included the Wizardry Series.

Wizardry began as a very simplistic kind of game. It reminded me of “Dungeons & Dragons” – because most of it was being left to my imagination. It was one step above text adventure games, because it had simplistic graphics – but “back in the day” – those were some amazing graphics. I remember creating my party, and trying to memorize those crazy spell names (Badios, Manifo, Malikto, etc). My then good friend and I had spent hours wandering through those dungeons, with pages upon pages of graph paper maps documenting over every move – and every trap that awaited us!

The wonderful thing about Wizardry – other than being one step above text adventure games (which were great! And still are!) – is that, you could import your characters from the previous game! So when we completed Wizardry 1, it was a matter of finding that 5.25″ disk (do you young kids even know what that is?) that we had saved the game characters on and importing them into Wizardry 2. Wizardry 2 was much like Wizardry 1 in that, it was still very basic in its structure – but back then, that was still amazing. It was the chance to take these characters (that we had named after ourselves and friends) and watching them grow more powerful (or falling to the deaths because of that one trap, in the one room, …)

Moving on to Wizardry III – it was the first game where you could not create a new party… It was actually a requirement to have a save game from either Wizardry I or Wizardry II. That made things difficult when you couldn’t find that blasted 5.25″ or 3.25″ disk that had your save games! (But by now we had learned our lesson and stored our save game disks with the previous game!) So we imported our characters in Wizardry III and began the march of doom, moving through some crazy dungeons with some crazy traps! Wizardry III took place quite a few years (like a hundred or so?) after Wizardry II – so it was odd that you’d still be using those character! But hey! It’s fantasy! We marched on!

Then came Wizardry IV which was completely different! Now you find yourself in the shoes of Werdna. None other than the main evil force! It was an interesting twist to play a “bad guy” trying to recover your power.

It’s the Wizardry game that I remember the least amount about. I don’t recall if it was bad or that it was because it was the first one where I didn’t get to import my save game characters. Next I remember Wizardry V, which had a few changes to the game that seemed to enhance the game.

I remember like the thief suddenly being far more efficient and powerful. (They could do things like hide in shadows during combat, and later spring out from the shadows for some extra attacks and damage!) Now we’re talking! Mages also became more powerful with enhanced spells – some of which allowed them to summon monsters and beasts to aid the party in fights! Hidden doors in the dungeons made thieves more useful as well. Wizardry V was a huge step over the previous versions in many regards. I mean, how could Wizardry get any better, right?

Wizardry VI was a major jump from Wizardry V. Suddenly, the game had a massive improvement in graphics! And the monsters actually looked like monsters and had some minor animations to them as well! I remember how Wizardry VI felt like a game changer – literally! Now your characters not only had their names, but reasonably cool looking character portraits next to their names! It definitely seemed to add some additional life to the game! I remember how much we played and replayed Wizardry VI. We were still mapping everything on graph paper and making the most of it! (I tell you we had volumes and volumes of graph paper thanks to Wizardry!)

It would be, what I believe is many years later, before Wizardry VII was created. This was the first Wizardry that I played alone. And let me tell you, it was a far jump from all the previous Wizardry games. This was the first real Wizardry that kind of combined Science Fiction with Fantasy. With the whole space ship crashing, and then meeting star traveling races like the Umpani and the T’Rang {which reminded me, for some reason of the Sand People from Star Wars}) – among others. But it also kept that fantasy feeling also – but suddenly you’re seeing people flying on hoovering machines. So it was a twist and a change – and I think their way of trying to possibly expand the universe of Wizardry (as to where future games could go). I got all the way to the final tower in Wizardry VII, and I remember that the last tower had a number of teleporting rooms that would teleport you to different locations – making mapping the thing quite difficult. (I think Wizardry VII also had a built in mapper, I can’t remember for sure). But it was till very disorienting – and it was the first time I had purchased a hint book. 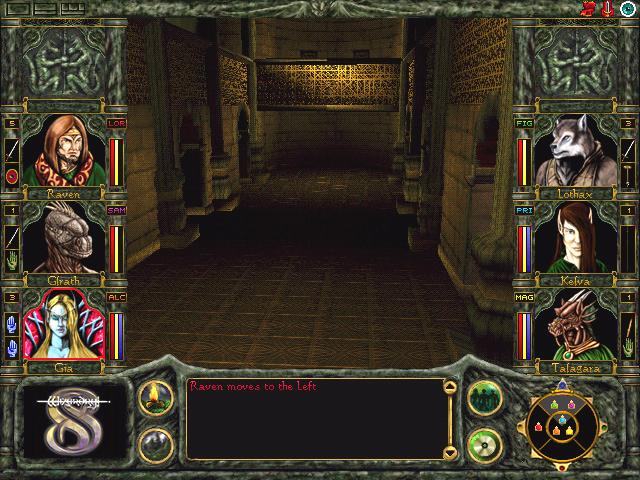 Then Sir-Tech fell unto difficult financial times. Years upon years later, they announced a Wizardry 8 game that almost did not see the light of day – until the employees put everything they could into the game, and basically worked for free to complete the game and get someone to distribute the game. The game was eventually completed and released – and this was the first Wizardry game that my wife and I actually played together. She actually enjoyed it enough to get her own copy and begin playing. (As an interesting side note, she actually finished and beat the game, one week before I did). I absolutely loved Wizardry 8, and loved that the wife played it as well. (We often quote RFS-81’s laugh “Ha Ha Ha”).

As I said previously, Sir-Tech fell unto hard times, and eventually closed the doors. Apparently a Japanese company purchased the rights to Wizardry and made several games – that were much more anime style Tale of the Forsaken Land and Labyrinth of the Lost Souls. This would apparently carry over to Wizardry: The Game – the MMO.

So, despite the anime thing with them owning the Wizardry franchise – I eagerly opted to download the Beta Version of this MMO. Downloaded. Installed. Played about 10 minutes, and knew immediately this wasn’t going to work out. I did love the intro that they did – where they made a reference to the old Dungeon Crawl – but everything was very anime style. The characters. Their appearance. They even had some “anime” looking choice type characters. As if that was not enough, there’s an assortment of limitations within the game – such as the length of character names (I think it was like six or seven characters long). The quests seemed very awkward. The UI was illogical – at best. 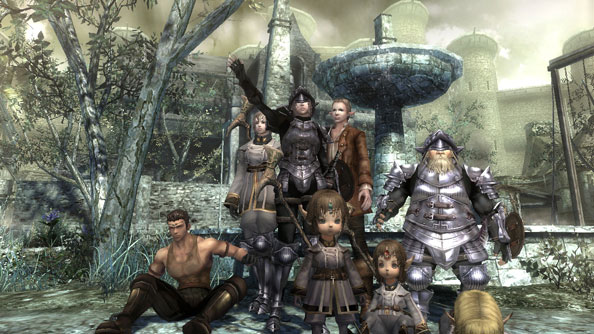 If you’re a lover of the original Wizardry series, this MMO is probably not for you. This is why I say, “Wizardry” – that which is, isn’t. It’s not the Wizardry you probably grew up if you’re an old school gamer like myself. If you enjoyed the PlayStation version of Wizardry – then this MMO might be for you. But I’d wager that it’s not. Granted, it’s still in Beta. There’s probably a lot of work to do – but it still was not the Wizardry I loved.

If you love Wizardry, I found this site to be the ultimate Wizardry site: http://www.tk421.net/wizardry/.

For information, specific to Wizardry 8, I made a small site eons ago which is found here – the Wizardry 8 FAQ Page.

If you agree or disagree, feel free to come by our forums, Facebook Page or even our Twitter feed! We’d love to hear your thoughts!