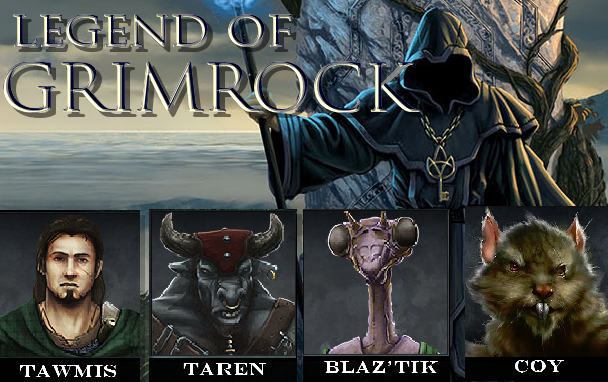 Tawmis grabbed a shell that sat, perched on the beach sand. He looked around and shattered a portion of it against a large boulder.

“What are you doing?” Coy asked.

“We’ve got no weapons because they sank with the ship,” Tawmis replied. “So I am going to make some weapons.”

“A shell is not going to be much defense against the horrors of this island,” Coy said, sitting back down.

“Neither is sitting there hoping some ship is going to come by and rescue us,” Tawmis retorted. Coy shot Tawmis a foul look.

Taren returned from the waters, holding an assortment of fractured panels of wood that had washed ashore from the sundered remains of the ship. Tawmis took one and began using the shattered shell to sharpen the point of one of them, creating a crude spear.

“You’re more resourceful than I would have given you credit for,” Coy admired. “Though I should have known, considering you managed to survive Grimrock as well.”

Taren chuckled. “You should hear some of the stories we could share,” the gruff minotaur said. “We have been through a lot, he and I. We have been in more predicaments than I can possibly ever hope to recall.” Taren looked over at Tawmis, “He has a habit of either bedding the wrong women, opening his big mouth, or wanting to help someone out, who is clearly in more trouble than they can handle.”

“You sound like a man with mix morals,” Coy said.

“I prefer to say that I am a complex individual,” Tawmis retorted, as he threw one of the panels of wood towards Coy. “Now if you’re doing trying to figure out the person that I am, we could use your help forging some weapons against this,” Tawmis tone changed to mimic Coy’s, “island of death.”

Coy picked up the wood and began carving away at the tip, “I still say this is a useless idea.”

“You’d probably get more done if you talked less,” Tawmis smiled. Tawmis turned to Blaz’tik, “Any luck recalling any of that wild magic you were casting before the explosion of Grimrock?”

“I am afraid not,” Blaz’tik admitted. “It’s as if I can see them there; whispering in my mind – but they have yet to come forward.”

“That’s all right,” Tawmis admitted. In truth, Tawmis was partially relieved that Blaz’tik could not recall all the wild magic. When they had found Blaz’tik, and he had absorbed all the magic of the Undying One into himself; Tawmis saw that the friendly humanoid-insect no longer resided behind those eyes; instead there was something there that craved even more power. It was almost a relief to know that Blaz’tik was back to being his normal, humble, less magical self.

Blaz’tik emerged from a small brush and help up a large sized egg. “Look what I found! There’s a few others here.”

“Something laid those eggs,” Taren noted. “Something fairly large.”

“Turtles,” Coy replied. “The western coast of this island is full of them.”

“Well that means we eat something other than these little crabs,” Tawmis nudged several crabs that had been skittering by his foot. “And now that we sort of have weapons; we start moving into the island itself and see if we can’t find a way off of here.”